How to watch Tour de France 2021: stage date and free live stream channels around the world 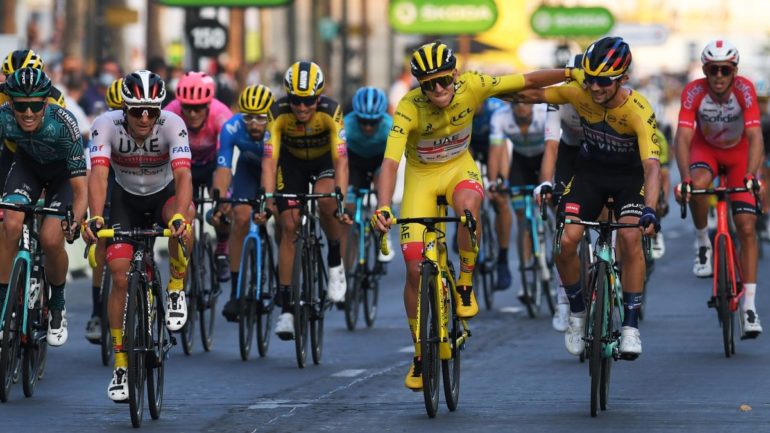 Cycling fans – the big one is almost here. Prepare your saddles for three weeks of the most beautiful, most difficult, most prestigious cycling event of the year – the 2021 Tour de France.  Join us for a spin as we explain how to get a Tour de France live stream and watch UCI WorldTour cycling online from anywhere – including for FREE in some countries! We also have info on this year’s Tour de France dates and stage times.

After last year’s unforgettable climax, the race for the iconic maillot jaune returns as Tadej Pogačar (UAE Team Emirates) and Primož Roglič (Team Jumbo-Visma) prepare to make France their battleground once more. Will the Slovenian stars dominate the mountains, hills and roads of La République again?

Roglič has been keeping himself out of the limelight since April, the 31-year-old no doubt mentally and physically preparing himself for revenge on his 22-year-old compatriot who, unlike last year, enters with a target on his back.

The Ineos Grenadiers team looks especially strong, with Geraint Thomas, Richard Carapaz and Richie Porte all riding in black and looking to spring a surprise, while Julian Alaphilippe (Deceuninck–Quick-Step) is the home favorite.

The riders will enter the Alps on the second weekend of the race, but Stage 17 is where the race is likely to be lost or won, as the Pyrenean Col de Peyresourde, Col d’Azet-Val Louron and Col du Portet separate the men from the boys.

Read on for everything you need to know to watch a 2021 Tour de France live stream from anywhere, as well as the countries where you can watch absolutely free.

Who has a free Tour de France live stream in 2021?

One of the best things about the Tour de France is that it’s completely free to watch in lots of countries around the world. For example:

How to watch Tour de France 2021 from outside your country

As discussed above, if you’re desperate to watch the Tour de France but you’re away from home and the coverage is geo-blocked, then you could always use a VPN to access it (assuming you’re not breaching any broadcaster T&Cs, of course). You may be surprised how simple it is to do.

ExpressVPN is the world’s top VPN right now
We’ve tested dozens of VPNs and think ExpressVPN is quite simply the best. Quick, secure, and intuitive to use, Express will have you streaming the latest blockbuster movies and binge-worthy TV in no time. Plus, its supported by dozens of devices, including Smart TVs, Fire TV Stick, PC, Mac, iPhone, Android phone, iPads, tablets, and many more.

You can try it for free now with a 30-day money-back guarantee. Better yet, if you decide to subscribe to ExpressVPN and opt for their annual plan, you’ll get 49% off the usual price as well as 3-months extra FREE – pretty amazing value really.

As usual, the Grand Tour is being shown in the UK on ITV4, which means anyone can watch a Tour de France live stream using the channel’s ITV Hub platform. Just make sure you have a valid UK TV license, of course.

For added on-the-go viewing convenience, ITV Hub has an excellent app that’s available on nearly anything that plugs in these days – just give it a search on your choice of mobiles, tablets, set-top boxes, select smart TVs, consoles and more.

It can be used by anyone in the UK 100% free – registration takes seconds and you only need a working email address and full UK postcode (such as SW1A 1AA for Buckingham Palace) to get streaming.

Another option is Welsh-language channel S4C, which will be offering daily live coverage of the 2021 Tour de France on its linear TV channel and via its app and S4C Clic streaming and catch-up service. S4C is also available to stream for FREE via BBC iPlayer.

And if you already subscribe to it, live Tour de France coverage is also available via the GCN+ Race Pass, which costs £39.99 for a year – but the caveat is that it’s mobile-only.

If you’re from the UK but not at home right now, you can still get your 2021 Tour de France fix by using a VPN.

How to watch Tour de France 2021: live stream cycling in Australia for FREE

Aussie cycling fans are equally lucky (except with the broadcast timings!), as a free Tour de France live stream is available Down Under too, thanks to SBS.

Don’t worry if you’re out of the country and want to catch that SBS broadcast – just grab a VPN and you can watch all of the stages as if you were back at home on your laptop, mobile or other TV streaming device.

How to watch the 2021 Tour de France: live stream the race in the US

Peacock TV has just replaced NBC Sports Gold as NBC’s cycling streaming option, is the service to head to to watch this crucial Premiership clash.

It costs just $4.99 a month, offers a FREE 7-day trial, and best of all, signing up for Peacock Premium is easy – it only takes a few seconds and some basic details to get up and running, even accepting internationally recognized payment platform PayPal for added convenience.

If you find yourself unable to access your normal coverage because you’re out of the country, remember that you can use a VPN to tune in just like you would at home.

How to watch the 2021 Tour de France: live stream cycling in Canada

FloBikes is the place to tune in for live Tour de France coverage in Canada.

A monthly subscription will cost you $30 while a yearly account will set you back $150 ($12.50 per month), which will give you access to coverage of major cycling events throughout the year.

Not in Canada to catch that FloBikes stream? Well you know the answer by now… using a VPN is the way to make sure you don’t miss a moment.

New Zealanders can watch the Tour de France on Sky Sport, which is available as part of a range of pay TV packages.

Subscribers are able to watch online using the country’s Sky Go service, while cord-cutters and anyone else can try the Sky Sport Now streaming-only platform – where a weekly pass costs just $19.99.

If you’re away from New Zealand right now, use a VPN and you’ll be streaming the cycling in no time at all.

How does the Tour de France work?

The Tour de France is the oldest – and, depending on who you ask, the most difficult and prestigious – of cycling’s three Grand Tours, the other two being the Giro d’Italia and the Vuelta a España.

This year’s race is the 108th edition of the Tour, which is affectionately known as La Grande Boucle (the big loop), and unlike last year’s event, which was fully contained within the borders of La République, this year’s edition will stray into neighbouring Andorra.

The Tour de France is split into into 21 stages, each of which is completed every day – and there are two days set aside for the riders to rest. Stage 1 takes place on June 26 and Stage 21 is scheduled for July 18, with the breaks in the action set for July 5 and July 6 (both Mondays).

At the end of each daily stage, the rider who crosses the finish line first is the ‘Stage Winner’, while the cyclist with the quickest overall time from the very start of the first day of the race gets to wear the iconic Yellow Jersey.

The overall winner of the Tour de France is the rider with the quickest time for all the stages put together.

However, two of the stages are individual time trials (Stages 5 and 20), during which each of the riders will race to set the fastest time, without their teammates helping out by creating slipstreams.

The opening stage, known as the ‘Grand Départ’, of the 2021 Tour de France will take place in Brest on June 26, while the the 21st and final stage sets off from Chatou and finishes in traditional style with a sprint down the Champs-Élysées in Paris on July 18.

Who are the favorites for Tour de France 2021?

Tadej Pogačar and Primož Roglič thrilled us last year, and it’s difficult to look past the Slovenian duo at the 2021 race.

Roglič had the general classification in the bag, until a heroic performance from his fellow countryman on the penultimate day saw Pogačar storm his way to the yellow jersey, which he took along with the white jersey and polka dot jersey too.

It was heartbreaking for Roglič, and we can’t wait to see them duke it out again.