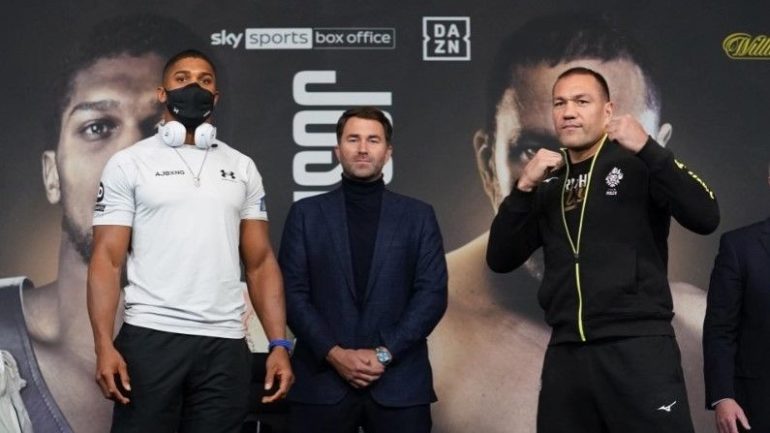 How much of it was legitimate beef and what simply amounted to the usual pre-fight posturing remains to be seen. But any notions that Anthony Joshua and Kubrat Pulev were still friendly sparring vanished at Friday’s weigh-in, when the two heavyweights had to be separated by security ahead of their title fight this weekend. Read on a we explain how to watch a Joshua vs Pulev live stream today and catch all the action online, no matter where you are in the world right now.

It looked like the pressure was getting to both fighters in their final public appearance being making their ring walks on Saturday, December 12 at Wembley in London

Tomorrow’s Anthony Joshua vs Kubrat Pulev showdown takes place at the SSE Arena, Wembley in London. The night’s undercard is set to get under way at 7pm GMT local time and will be shown in the UK on Sky Sports Box Office (that’s 2pm ET / 11am PT start in the US and a 6am AEDT start on Sunday in Australia).  Ring walks for the main event expected after 10pm GMT local time (5pm ET / 2pm PT / 9am AEDT), and you can access the Sky coverage you would at home from wherever you are with a reliable VPN in your corner.

For Joshua, his WBA, WBO and IFF heavyweight belts aren’t just at stake – his entire legacy is, as it rests on the obscenely hyped unification with fellow Brit Tyson Fury next year.

To get that deal done, Joshua can’t afford to lose tonight – and fans better hope he looks more like the fighter than reclaimed his titles of Andy Ruiz Jr in December 2019 having lost them in the most unthinkable fashion earlier that year.

Pulev, a 39-year-old Bulgarian and two-times former European heavyweight champ, has plenty of pedigree, though. He’ll be as hungry as they come, too, as this is likely his last shot at a world title given his age and relative stature within the sport – he lone previous chance resulting in defeat to a certain Wladimir Klitschko back in 2015.

Adding further intrigue, this fight has been in the making since 2017 – the latest cancellation being earlier this year, when Tottenham Hotspur Stadium had to scrap its hosting of the blockbuster event due to coronavirus.

The result is a fascinating encounter for not just boxing enthusiasts but all sports fan, so follow our guide below to catch this unmissable fight on Saturday – here’s how to get a Joshua vs Pulev live stream and watch boxing online from anywhere.

If you’re abroad and discover that your usual coverage is geo-blocked, then the only alternative that we know is to use a VPN to dial in to a country that does have one.

Can I watch a free Joshua vs Pulev live stream?

No – but you can get it dirt cheap in some parts of the world.

Joshua vs Pulev appears to be largely available around the world via DAZN and will be offered as part of to customer’s as part of their subscription.

The cheapest way to watch Joshua vs Pulev is on DAZN in Australia or New Zealand, by taking advantage of DAZN’s rock-bottom $2.99 a month introductory offer.

its a different story in Joshua’s home nation.

The fight and its undercard will be shown exclusively via pay-per-view (PPV) with Sky Sports Box Office the broadcaster.

The event is available to purchase in the UK and Ireland for £24.95 via Sky Sports Box Office. Watch either via your Sky account, or you can watch on your computer, mobile, tablet and various TV streamers.

Joshua vs Pulev live stream: how to watch the fight in the UK, time, PPV price and more

You can buy the Anthony Joshua vs Kubrat Pulev fight for £24.95 via Sky Sports Box Office. Watch either via your Sky account, or you can watch on your computer, mobile, tablet and various TV streamers.

Sky’s overage starts at 6pm GMT, but we wouldn’t expect Joshua to be in the ring until 10pm GMT at the earliest.

Not in the UK? Then you’ll need a VPN to watch this live stream – follow those instructions set out below. As explained, VPNs give a more secure way to stream and can help your laptop or phone think they’re in a completely different city or country to the one you physically are in.

How to live stream Joshua vs Pulev in the US

Streaming service DAZN (pronounced ‘Da Zone’) has the rights to show the Joshua Vs Pulev fight and coverage of the undercard set to start at 2pm ET/ 11am PT start on the subscription channel.

Not in the US? Residents of the country who find themselves abroad for the fight will find they can access their DAZN subscription just like they would at home – wherever you are in the world, all you need is the help of a good VPN.

FREE Joshua vs Pulev live stream: how to watch the fight online in Canada

DAZN also has the rights to live stream Joshua vs Pulev title fight in Canada, with coverage set to start at 2pm ET/ 11am PT on the subscription channel.

A DAZN contract will set you back $19.99 per month, or $150 for the year. The channel is promising over 100 fight nights per year and even offers a generous FREE 30-day trial – meaning you can essentially watch Joshua vs Pulev free, if you play your cards right.

How to watch a Joshua vs Pulev live stream in Australia

The Joshua vs Pulev fight marks streaming service DAZN’s global roll and will be one of the first major events available on the service Down Under.

The platform is set to exclusively screen events from the likes of Matchroom Boxing, Golden Boy Promotions and GGG Promotions in the coming months.

Coverage of the undercard is set to begin at 6am AEDT on Sunday in Australia.

A DAZN contract in Australia is currently set at a knock-down initial price of $2.99 a month.

How to watch Joshua vs Pulev: live stream the fight in New Zealand

Joshua vs Pulev also marks the official launch of DAZN in New Zealand as well. Coverage of the undercard is set to begin at 8am NZDT on Sunday morning.

A DAZN contract in New Zealand is currently set for a discount initial price of $2.99 a month.

Best camping gear in 2021: Tech to help you get away

Pronounced ‘Da Zone’, DAZN is a sports-centric streaming service that launched in 2016 and is now available in over 200 countries all around the world including the US, Canada, UK, Australia and New Zealand.

It’s also seeking to challenge the pay-per-view boxing hierarchy, and is scoring an increasing number of coups. In addition to broadcasting the Joshua vs Pulev fight in a number of countries, it’s also got upcoming fights featuring Canelo Alvarez and Gennady ‘GGG’ Golovkin.

The price of DAZN also varies depending on where you are in the world but is generally competitive – in newer market like the UK, an introductory offer is still running that has it available for just £1.99 a month, while in more established markets like Canada it costs CAD$20 a month. It also offers a FREE trial in some areas and works with pretty much any modern device imaginable.

It’s a great all-round offering, with the only real drawback (as we’ve noted above) being that it doesn’t play overly nice with VPNs in all territories, so you may only be able to watch it in your country of residence, even when paying for it. That’s not the universal case, though, as our latest testing reveals DAZN US is accessible using a VPN, for instance.

The Joshua vs Pulev fight takes place on Saturday, December 5 at the SSE Arena in London – formerly known as the Wembley Arena.

The night’s undercard is set to get under way at 7pm GMT local time  – that’s 2pm ET/ 11am PT start in the US and 6am AEDT on Sunday in Australia.

Who is Anthony Joshua?

Born in Watford, the 31-year-old turned professional in July 2013,and would go on to win the British heavyweight title in 2015 after knocking out Dillian Whyte.

Having claimed the IBF heavyweight championship from Charles Martin in April 2016, he would go on to clinch the WBA, IBO titles and WBO with wins over Ukrainian legend Wladimir Klitschko and Joseph Park.

Following a shock defeat to Andy Ruiz Jr in June 2019, Joshua regained his titles from the Mexican/American fighter with a unanimous decision in an epic rematch six months late.

Who is Kubrat Pulev?

Born in Sofia, Bulgaria, Pulev is one of the country’s biggest stars.

The the 6ft 4in boxer has a reach of 80in and boxes with an orthodox stance.

The 39-year-old only turned professional at the age of 28, and has held the European heavyweight title twice between 2012 and 2016.

Ranked as the world’s ninth best active heavyweight by the Transnational Boxing Rankings Board, Pulev has fought 29 times, winning 28 and finishing 14 of those via knock out. His single defeat coming at the hands of Wladimir Klitschko in a an IBF title fight back in 2014.

On top of that, Hughie Fury face off against Poland’s experienced Mariusz Wach in what could prove the fight of the night.