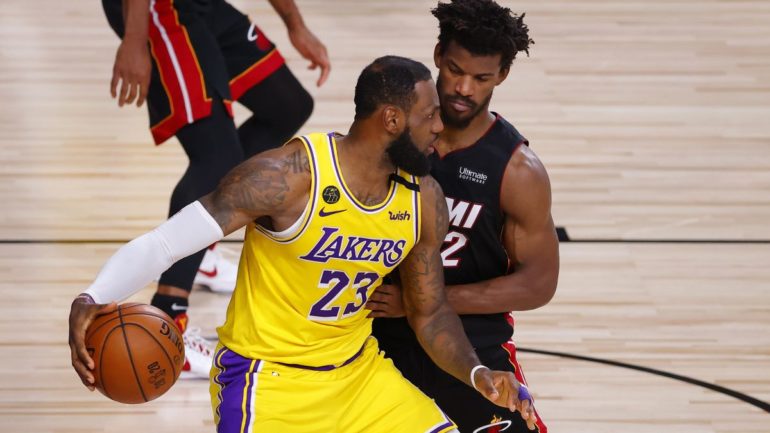 Doing it for Kobe, the Los Angeles Lakers find themselves just one win away from an emotional, historic 2020 NBA Finals victory. But Jimmy Butler and the Miami Heat will be desperate to keep themselves in this series. Game 5 is looking like one not to be missed, so read on for our guide to watching a LA Lakers vs Heat live stream online tonight – no matter where you are in the world.

This season marks the first time the Lakers have appeared in the finals since their title-winning 2010 team, and sees LeBron James back in the finals after a one-season hiatus. King James is facing his former team Miami Heat, whom he led to consecutive NBA titles back in 2012 and 2013.

Game 5 of the 2020 NBA Finals between the LA Lakers and Miami Heat takes place on Friday, October 9 at 9pm ET / 6pm PT (so 2am BST, midnight AEDT). The rest of the series schedule is below.

It’s being shown by ABC in the US and full streaming details can be found below – take your preferred NBA coverage wherever you are with ExpressVPN and get 30-day money back guarantee.

He and Anthony Davis have, predictably, been the stars of the show so far, leading the Lakers to 116-98 and 124-114 victories in the first two encounters. The Heat got the fire going for game 3 and stormed to a 115-104 victory, with Jimmy Butler’s exceptional 40-point triple double leading the way. But the Lakers hit back with a ruthless win on Tuesday night to take things to 3-1.

As it did in the ‘regular’ season and playoffs, all the action is taking place without fans at the ESPN Wide World of Sports complex in Orlando, Florida – part of Disney World, yes, but certainly no holiday given the circumstances.

It’s so far been a fascinating and unique NBA Finals series, so read on as we explain how to watch a LA Lakers vs Miami Heat live stream and catch it from anywhere in the world today.

We have watching options for the US, Canada, UK and Australia below (as well as key information about the NBA League Pass), but if you’re abroad you may not be able to watch a Lakers vs Heat live stream using your usual cable TV or streaming service, due international geo-blocking restrictions.

When this is is the case, the simplest and most reliable solution is to use a VPN service, which lets you change your IP address – and therefore your location – when you visit a website. On top of that, it gives you the ability to reroute your device’s internet connection through a server in a different country or state, thereby getting you access to coverage that might not otherwise be available – even though you may pay for it.

Try ExpressVPN 100% risk-free for 30 days
We’ve tested over 200 VPNs and found that ExpressVPN is an absolute slam duck. Fast, secure, and easy to use, you’ll be up and running with Express in no time.

Plus, you can try it out for free with a 30 day money-back guarantee, so if you’re not sold on being able to watch sports from around the world you can always claim your cash back. There’s a massive range of supported devices on offer, from Smart TVs, Fire TV Stick, PC, Mac, iPhone, Android phone, iPads, tablets etc. And if you subscribe to ExpressVPN now, you’ll also get 49% off the usual price as well as 3-months extra FREE if you take out an annual plan (the best value option).
View Deal

VPNs are good for more than watching NBA abroad, however. You’re securing your online activity with a range of safety net features that keep your data private while also getting you into geo-blocked websites or Netflix regions.

LA Lakers vs Miami Heat live stream: how to watch Game 5 in the US

The entire LA Lakers vs Miami Heat series is being shown nationally on ABC – for start times, check out the Finals schedule above. That means that you’ll also be able to watch online at ABC.com and via the broadcaster’s mobile apps.

There are also other TV streaming services that will give you access to ABC’s NBA coverage and a whole lot more content as well.

Of the many over-the-top streaming options, FuboTV is a great option for basketball and a host of other sports and live TV.

Pricing starts from $64.99 a month, which is a darn sight cheaper than cable, and there’s even a FREE 7-day fuboTV trial you can take advantage of. One of the things we love about fubo is that it makes cancelling easy if you decide it’s not for you – and it’s easy to get started, too, thanks to a slick payment system that accepts internationally recognized payment platform PayPal as well as major credit and debit cards.

Sling TV from $30 per month – ABC can be added to a Sling TV subscription by adding a local channel bundle.AT&T Now: Has numerous plans, the cheapest being $65 p/m for over 40 channels, which includes ABC as well as HBO. As ABC is only available in select markets you should check to ensure you have access to the channel’s live stream.Hulu with Live TV $54.99 per month – Hulu with Live TV gives you access to ABC, CBS, NBC and FOX in most areas as well as to ESPN channels.

Just remember that if you already subscribe to one of these services or normally have access to ABC on your TV at home, all you need is a good VPN and you can watch the LA Lakers vs Miami Heat series live just like you would from your sofa – and our top pick, ExpressVPN, will give you 3-months free if you sign up for an annual deal.

How to watch LA Lakers vs Miami Heat: live stream in Canada

TSN has the rights to show the 2020 NBA Finals playoffs live and in full across Canada.

With TSN widely available on cable, catching the NBA online shouldn’t be difficult for these Canadian viewers – simply enter the details of your TV provider into the network’s website to watch.

However, if you don’t subscribe through cable TV, you can also use TSN Direct, with a $19.99 monthly subscription cost.

You’ll also be able to watch the Lakers vs Nuggets online with NBA League Pass. If you’re out of the country you can use a VPN  to easily swap your location so you can still live stream it all.

All times are the same as in the US as per the schedule above.

How to get a Lakers vs Heat live stream in Australia

In CompaniesSmartphones
on 28 April 20215 min read

There are two options for Australian viewers wanting to tune in to the NBA Final playoffs this year.

The first is through cable and, more specifically, Foxtel. It offers ESPN, which is the home of NBA basketball Down Under, but will require you to commit to a contract.

If that’s not for you, then excellent value streaming service Kayo Sports also has you covered for all things ESPN and can be cancelled at any time – so we’d recommend looking into this option first.

Costing either $25 or $35 monthly, it’s far cheaper than Foxtel and you can grab a 14-day FREE TRIAL to test it out. Perhaps best of all, a single subscription can be used simultaneously across multiple devices, meaning you can share one with family or friends and pay less.

Coverage of Game 5 of the Lakers vs Heat series is confirmed for both ESPN and Kayo, with tip off set for midday on Saturday.

There’s a lot of late nights in store for UK hoops fans looking to follow this year’s NBA Finals live – but Sky Sports has you covered.

Sky Sports Arena will be the channel to head to, with Game 5 beginning at 2am BST in the early hours of Saturday morning. As well as being available via Sky, you can also watch the channel with BT and Virgin Media TV packages.

For those who don’t fancy the full commitment of a Sky contract, there are other options.

A Now TV Sky Sports Pass offers all 11 Sky Sports channels to watch and can be cancelled at any time. As well as the NBA, there’s also loads of football, cricket, golf, and F1 action, with pricing that starts at £9.99 for a day’s use – but we’d highly recommend the better value monthly pass for the majority of viewers. It gets you coverage of the rest of the season as well as early playoff games as well as the full month of content from other sports as well.

If you’re really only interested in an NBA live stream, you could also consider an NBA League Pass, which is an all-in-one subscription that offers every game left in the season on a range of devices.  An annual pass now comes in at a reduced price of £24.99 for the FInals.

If you’re looking to watch Lakers vs Heat from abroad, you might be geo-blocked out of some of these viewing options. Using a reliable VPN can easily get around this so you can get back to the game.

If you’ve been shopping for ways to pick up a Lakers vs Heat live stream online, then you’ve likely come across the NBA League Pass. As the league’s official streaming service, it offers coverage of plenty of games and is available all around the world.

However, if you’re in the US, the NBA League Pass won’t show you any of the Finals action live. That’s because it’s being broadcast on national TV, rendering your League Pass effectively useless.

NBA League Pass is an international service, so you’ll be able to find different packages to suit international markets as well. In the UK, for example, a £24.99 annual fee gets you access to every remaining NBA game, without blackout restrictions or qualms over nationally televised broadcasts.

As ever, if you’re out of the country you subscribed to NBA League Pass in, it’s likely you can use a VPN to get around these restrictions – based on comprehensive testing, we rate ExpressVPN as the best and it offers a free trial so you can check it out, no strings attached.