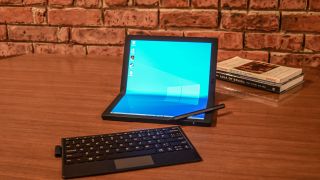 Foldable phones and tablets have been all the rage the past couple of years, and for good reason. The technology promises to shake up the form factors of an entire class of devices that have been locked into the variable-sized ingot and slate designs since the launch of the iPhone in 2007 and iPad in 2010

We’re entering a new era though thanks to the new Lenovo ThinkPad X1 Fold – the world’s first foldable Windows 10 laptop computer – and if the X1 is any indication, it will probably be a very glorious one for mobile computing enthusiasts.

We’re in the process of doing a formal X1 Fold review, so we have to put it through the same paces that we put all of the laptops through when we review them, but our early impressions of the X1 Fold are such that it really does justify coming out a little bit early and giving our initial thoughts of the device.

Definitely check back in with us soon to get a more in depth discussion of the X1 Fold, but so far, we have to say that the X1 Fold definitely feels like we’re holding a piece of the future in our hands.

There is a lot to say about the specs and internals of the X1 Fold, from the screen resolution to the new Intel Lakefield i5 processor, but what really stands out about this device is its design. This is honestly what innovation looks – and it’s something we haven’t really seen in mobile computing in as long as we can remember.

This laptop folds like a book when used in landscape mode, and we really can’t emphasize the book part of that. The leather panel on the back feels like a premium book or portfolio cover and makes carrying around the device as simple tossing it (gently, of course) into a bag or briefcase.

The leather panel slides slightly as it closes and reveals a glossy plastic trim with the Intel Core i5 stamp in the corner, a hell of a touch that makes it feel less like a foldable device and more like a very classy Transformer that prefers a good book to all that razzle-dazzle of cars, trucks, and fighter jets.

The bezels on the X1 Fold are pretty large, especially for a device this expensive. But, the technology at work here is in its adolescence, so some compromises are to be expected as far as current state of the art design is concerned. It’s still weird to see a half-inch bezel around a laptop screen, but then we remember that the 2K screen is freakin’ folded at a 90 degree angle and we kind of forget about the bezels.

This is definitely a laptop meant for early adopters

The Lenovo ThinkPad X1 Fold is not cheap. Starting at $2,499 / £2,519 / AU$3,799 (without the Bluetooth keyboard and, in the US and Australia, without the Lenovo Mod Pen), this is a very expensive laptop that doesn’t come with an enormous amount of power, at least according to our early tests.

It’s a good bit pricier than a comparably-powered ultrabook, and definitely not as powerful as similarly priced 2-in-1 laptops – which is probably the most similar form factor to the X1 Fold – so there is absolutely an early adopter premium you’re paying with this device.

Normally, we’d shy away from premiums like that since you’re often paying extra for gimmickry rather than actual substance, but in the case of the X1 Fold, you can definitely make the case that this one is different.

A lot of new tech makes it to market and after lackluster sales – and once the novelty wears off – we usually see these things exit stage left only to come back around as memes in 20 years time meant to make us all feel old and laugh at how we thought MiniDiscs and Google Glass were the wave of the future.

The Lenovo ThinkPad X1 Fold is not that. Predicting future tech is a very risky limb to step onto even in the best of times, but the sheer number of use cases for something like the X1 Fold make us confident that we’re actually seeing the future here. It’s too soon to say whether the X1 Fold will be successful or is even worth buying, but the era of foldable laptops is most definitely here.