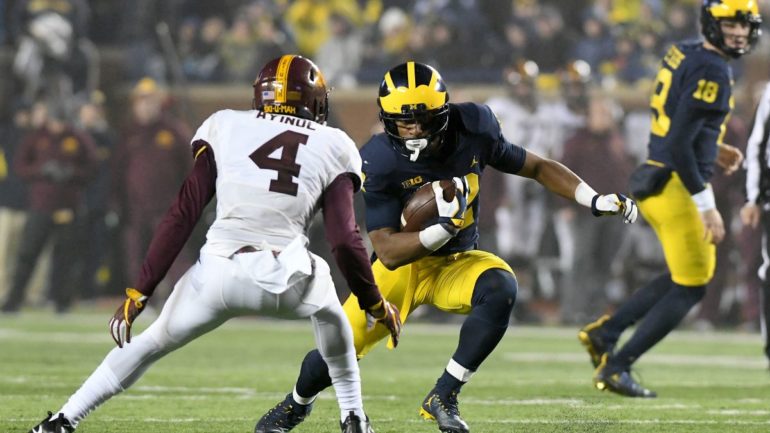 Michigan vs Minnesota kicks off at 7.30pm ET/4.30pm PT today (Saturday, October 24) at TCF Bank Stadium in Minneapolis. Full TV and college football live stream details are below – and you can watch from anywhere with the help of a good VPN.

Minnesota are coming off a terrific 11-2 season and are currently ranked 21st in the national polls, so expectations are pretty high for coach P. J. Fleck and the Golden Gophers. 2019 was a glorious year, and with illustrious alumni like NFL Hall of Fame tight end Charlie Sanders, Gophers fans will be hoping for big things.

Michigan are no slouches either, and are ranked 18th in the country and have the superior head-to-head record in this rivalry, leading the series 75–25–3. They’re also the current holders of the Little Brown Jug, and head coach Jim Harbaugh (a former NFL Coach of the Year) won’t be letting go of that without a fight. Plus, when you know you’ve got former players like six-time Super Bowl champion Tom Brady rooting for you…well, let’s just say you’re going to show up.

This is simply a brilliant prime matchup to help kick-off the 2020 B1G season, so read on as we explain how to watch get a Michigan vs Minnesota live stream and watch college football online from anywhere in the world.

How to watch Michigan vs Minnesota from outside your country

Use a VPN to stream college football live from anywhere

Tonight’s clash between Michigan vs Minnesota is set for 7.30pm ET / 4.30pm PT and is being shown on ABC.

For cord-cutters, life couldn’t be easier, as ABC is also available to watch online via a number of over-the-top streaming services. In this case, we’d recommend trying FuboTV.

There’s even a FREE 7-day FuboTV trial you can take advantage of. One of the things we love about fubo is that it makes cancelling easy if you decide it’s not for you – and it’s easy to get started, too, thanks to a slick payment system that accepts internationally recognized payment platform PayPal as well as major credit and debit cards.

Don’t forget, you can take your college football streaming coverage with you wherever you are with the help of a good VPN.

College football isn’t as big a deal in Canada as it is in the US, but there are still plenty of ways to watch the biggest games – just not Michigan vs Minnesota.

As of the 2020/21 season, the Big Ten Network is available through the following cable providers: Cogeco, Eastlink, Rogers Cable, Shaw Cable, Shaw Direct and VMedia. Head to the relevant website of your service, log-in with your credentials, and you’ll be able to stream games online just like you’d watch them on TV.

TSN and DAZN also show select college football games, but as this one’s on ABC in the US

Anyone in Canada from a country where that offers additional ways to live stream has the option of grabbing hold of an effective VPN and following our instructions above.

You can tune into Minnesota vs Michigan live on BT Sport, with kick-off set for 12.30am in the early hours of Sunday, and coverage starting at midnight.

BT TV customers can add BT Sport to their service for just £10 extra a month and most Saturdays, BT Sport ESPN will show the biggest NCAA college football games.

If you don’t want the commitment of a full BT TV contract, there’s now also the option of the BT Sport Monthly Pass, which costs £25 and lets you stream all the same channels you can watch on TV. Smartphones, tablets, consoles, and select streaming devices are all supported, but PCs, laptops, and web browsers aren’t.

Want to catch the college football action in the UK just like you would at home? Or tune back into your UK streaming service from abroad? Then grabbing a VPN will let you log into a compatible IP address so you can live stream as usual no matter where you are.

Minnesota vs Michigan isn’t being shown Down Under, though select college football coverage is available courtesy of Foxtel, which offers it on ESPN and has the Foxtel Go app so you can stream it to your laptop or mobile device (logging in with your Foxtel ID).

For cord-cutters or anyone who prefers not to be locked into a lengthy contract,  Kayo Sports is the official over-the-top service of Foxtel and offers extensive streaming-only coverage of all the provider’s sports channels, including all the Fox Sports channels, ESPN and ESPN2, and three beIN Sports channels.

There’s at least six NCAA football games on offer this weekend, to give you a taste of what’s generally on offer.