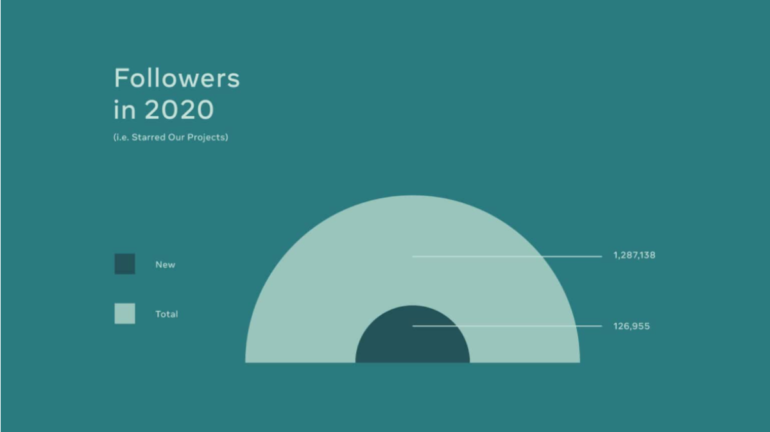 Facebook’s open-source platform has been growing steadily since it launched and is showing no sign of its popularity waning anytime soon: the past year has seen the project expand yet again, reaching close to 1.3 million followers on Github.

That’s another 127,000 new developers starring Facebook’s projects on the open-source platform just in the last year, a testimony to “the growth of open source worldwide,” according to Suraj Subramanian, developer advocate at Facebook, who compiled a review of the social media giant’s key achievements in the open-source space in 2020.

For many years, Facebook has been sharing the company’s creations with the wider developer community in a major open-source project.

Developers around the world can access the codebase for some of the company’s major software and hardware tools in Github repositories. Subramanian confirmed that Facebook’s portfolio of repositories has now grown to more than 700, with over 200 projects made public this year alone – another increase from 2019, which saw 170 new repositories added to the portfolio.

Both Facebook engineers and independent developers around the world contributed to the community by tweaking Facebook’s codebase almost 128,000 times in total, with about 15% of those changes carried out by participants external to the company. That marks a change from the previous year, when external contributors committed about a third of the total changes.

Subramanian added that 20 new projects were added to Facebook’s PyTorch ecosystem, a Python-based machine-learning library that is mostly used for computer applications and natural language processing.

The past few months also saw many companies external to Facebook make use of the PyTorch library for a variety of use cases, ranging from training robotic crop sprayers to identify weeds as they move through a field, to improving the training of surgeons. Pharmaceutical firm AstraZeneca also revealed that it is using PyTorch to streamline the drug discovery process.

Among some of the key technologies that were open sourced by the social media company last year, Subramanian highlighted M2M-100, a multilingual machine translation model that can translate any pair of 100 languages without relying on English, and is thought to be more accurate than systems that require translating into English before coming up with a final translation in the target language.

Facebook also made its ReBel algorithm available to the public in 2020, which builds on the technology that underpins AlphaZero to beat humans at a wide range of games such as poker or Texas Hold’em, and constitutes, according to Subramanian, “a big step towards general AI.”

Another one of Facebook’s open-source projects that has garnered attention is React Native, a JavaScript code library that lets developers build user interfaces for native iOS and Android apps. Although the platform has existed for a long time, in early 2020 Facebook open-sourced a new React library called Recoil to provide developers with features like time-travel debugging, which are hard to achieve with React alone. In less than a year, Recoil has already secured over 11,000 followers.