Researchers identify ‘violent’ processes that cause wheezing in the lungs 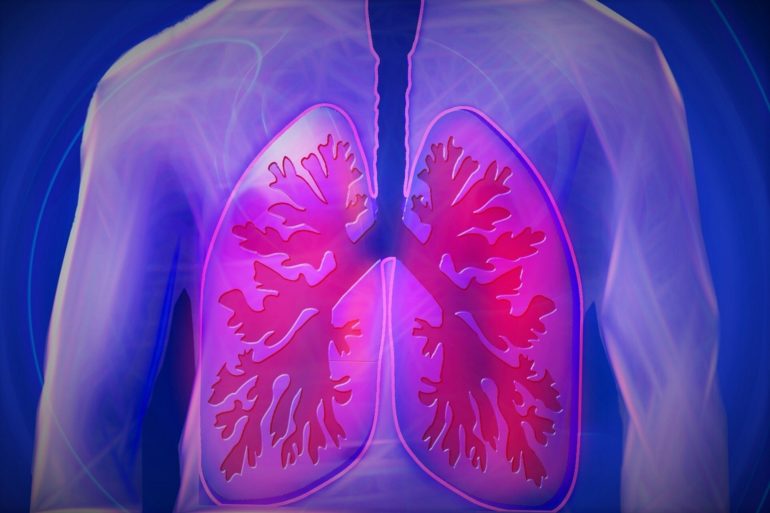 A team of engineers has identified the ‘violent’ physical processes at work inside the lungs which cause wheezing, a condition which affects up to a quarter of the world’s population.

The researchers, from the University of Cambridge, used modelling and high-speed video techniques to show what causes wheezing and how to predict it. Their results could be used as the basis of a cheaper and faster diagnostic for lung disease that requires just a stethoscope and a microphone.

Improved understanding of the physical mechanism responsible for generating wheezing sounds could provide a better causal link between symptoms and disease, and help improve diagnosis and treatment. The results are reported in the journal Royal Society Open Science.

At some point, most of us have experienced wheezing, a high-pitched whistling sound made while breathing. For most people, the phenomenon is temporary and usually the result a cold or mild allergic reaction. However, regular or chronic wheezing is often a symptom of more serious conditions, such as asthma, emphysema, chronic obstructive pulmonary disease (COPD) or certain cancers.

“Because wheezing makes it harder to breathe, it puts an enormous amount of pressure on the lungs,” said first author Dr. Alastair Gregory from Cambridge’s Department of Engineering. “The sounds associated with wheezing have been used to make diagnoses for centuries, but the physical mechanisms responsible for the onset of wheezing are poorly understood, and there is no model for predicting when wheezing will occur.”

Co-author Dr. Anurag Agarwal, Head of the Acoustics lab in the Department of Engineering, said he first got the idea to study wheezing after a family vacation several years ago. “I started wheezing the first night we were there, which had never happened to me before,” he said. “And as an engineer who studies acoustics, my first thought was how cool it was that my body was making these noises. After a few days however, I was having real trouble breathing, which made the novelty wear off pretty quickly.”

Agarwal’s wheezing was likely caused by a dust mite allergy, which was easily treated with over-the-counter antihistamines. However, after speaking with a neighbour who is also a specialist in respiratory medicine, he learned that even though it is a common occurrence, the physical mechanisms that cause wheezing are somewhat mysterious.

“Since wheezing is associated with so many conditions, it is difficult to be sure of what is wrong with a patient just based on the wheeze, so we’re working on understanding how wheezing sounds are produced so that diagnoses can be more specific,” said Agarwal.

The airways of the lung are a branching network of flexible tubes, called bronchioles, that gradually get shorter and narrower as they get deeper into the lung.

In order to mimic this setup in the lab, the researchers modified a piece of equipment called a Starling resistor, in which airflow is driven through thin elastic tubes of various lengths and thicknesses.

Co-author and computer vision specialist Professor Joan Lasenby developed a multi-camera stereoscopy technique to film the air being forced through the tubes at different degrees of tension, in order to observe the physical mechanisms that cause wheezing.

“It surprised us just how violent the mechanism of wheezing is,” said Gregory, who is also a Junior Research Fellow at Magdalene College. “We found that there are two conditions for wheezing to occur: the first is that the pressure on the tubes is such that one or more of the bronchioles nearly collapses, and the second is that air is forced though the collapsed airway with enough force to drive oscillations.”

Once these conditions are met, the oscillations grow and are sustained by a flutter mechanism in which waves travelling from front to back have the same frequency as the opening and closing of the tube. “A similar phenomenon has been seen in aircraft wings when they fail, or in bridges when they collapse,” said Agarwal. “When up and down vibrations are at the same frequency as clockwise and anticlockwise twisting vibrations, we get flutter that causes the structure to collapse. The same process is at work inside the respiratory system.”

Using these observations, the researchers developed a ‘tube law’ in order to predict when this potentially damaging oscillation might occur, depending on the tube’s material properties, geometry and the amount of tension.

Uh, Those ‘Death of iTunes’ Rumors Are Starting to Look More Real

In Apps and WebCompaniesSmartphones
on 2 June 20191 min read

“We then use this law to build a model that can predict the onset of wheezing and could even be the basis of a cheaper and faster diagnostic for lung disease,” said Gregory. “Instead of expensive and time-consuming methods such as X-rays or MRI, we wouldn’t need anything more than a microphone and a stethoscope.”

A diagnostic based on this method would work by using a microphone—early tests were done using the in-built microphone on a normal smartphone—to record the frequency of the wheezing sound and use this to identify which bronchiole is near collapse, and whether the airways are unusually stiff or flexible in order to target treatment. The researchers hope that by finding changes in material properties from wheezing, and locations that wheezes come from, the additional information will make it easier to distinguish between different conditions, although further work in this area is still needed.

In lung disease, crackling and wheezing can be more than just a sign of sickness


Citation:
Researchers identify ‘violent’ processes that cause wheezing in the lungs (2021, February 23)
retrieved 24 February 2021
from https://medicalxpress.com/news/2021-02-violent-wheezing-lungs.html