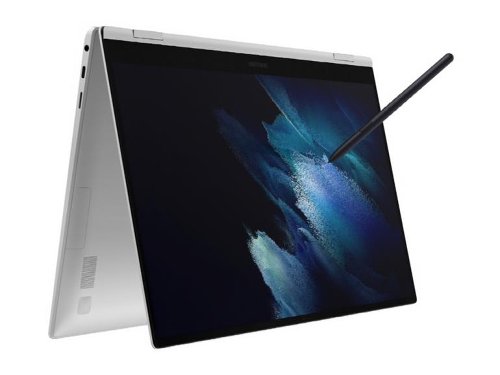 Samsung has unveiled a new line of PCs at its Unpacked event, and the Galaxy Book Pro 360 stood out as offering serious competition to Apple’s M1 MacBooks.

Build around Intel’s 11th-generation processors, Samsung has packed a lot of technology into a sleek, thin-and-light chassis.

Must read: The new M1 iMac highlights everything that’s wrong with Apple

But there’s more. And it’s the more that takes the Galaxy Book Pro 360 beyond what Apple can offer with the MacBook.

There’s S Pen support, something that initially feels gimmicky, but is actually quite nice once you start using it and will be a benefit to those who use other Samsung hardware that uses the same input device.

Then there’s the AMOLED display. I’ve not hooked my own eyes on this display yet, but Samsung AMOLED displays are nice, and I can imagine this giving Apple’s LED displays a serious run for their money, especially when it comes to eye comfort.

I’m also seriously impressed by the built-in 5G support. People have been asking for this on the MacBook platform for years, and even with the introduction of the M1 hardware, but users are still waiting.

For power users, the high-end Core i7 processors and 32GB of RAM will certainly be attractive, going above and beyond what Apple offers in its M1 offerings.

There’s a lot to like when looking at Samsung’s Galaxy Book Pro 360. But I’m a bit hesitant saying that this puts Apple on the back foot as we need to wait and see what happens when Apple unveils its M1-powered (or possibly 2nd-generation Apple Silicon) 15-inch MacBook Pro hardware.

To compare the Galaxy Book Pro 360 to the MacBook Air or the 13-inch MacBook Pro is to do an injustice to them all.

Also, we have to remember that Samsung is relying on Intel for its silicon, while Apple has decided to break away. This could be a big factor as to how things play out in the medium term, and if Apple can outpace Intel in the silicon space (and early indicators suggest that this could very well be the case), then Samsung being hitched to Intel could become a real liability.

But Samsung has come out strong with the Galaxy Book Pro 360, and for someone looking for a Windows 10 machine — especially if that someone is using a high-end Samsung smartphone, then this is certainly a compelling package.