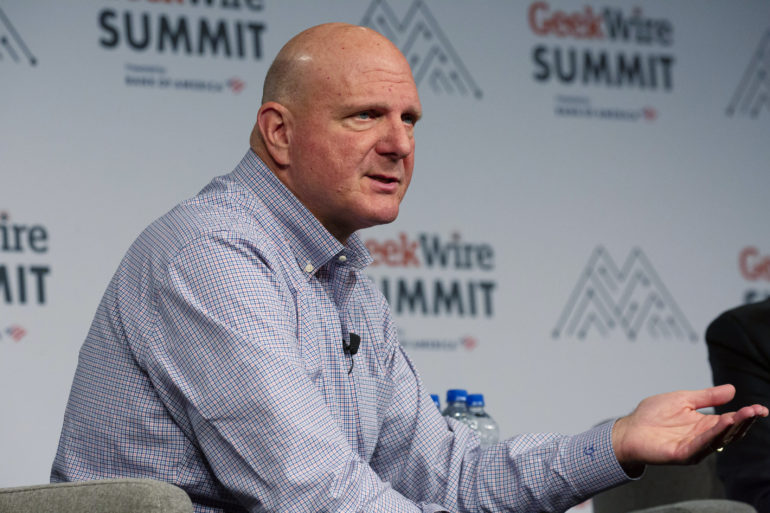 Former Microsoft CEO Steve Ballmer said Thursday that he regretted not getting into cloud computing earlier.

The remarks point to Amazon’s success in building a business around renting computing and storage resources to companies, governments and schools.

Amazon moved into the market well before Microsoft, IBM, Oracle and other information-technology providers, and has held on to its lead. Microsoft’s Azure cloud delivered over $7 billion in revenue in the fourth quarter, according to two analysts’ estimates, while Amazon’s competing Web Services business generated $12.7 billion in revenue during the same period. The success of AWS has propelled its leader, Andy Jassy, into the top spot at Amazon, where he’ll replace Jeff Bezos later this year.

“Azure — I wish we probably started a year or so, two years earlier,” Ballmer said in an audio conversation streamed live on the mobile app Clubhouse. “We started actually with platform as a service instead of infrastructure as a service. Probably we would do that a little bit differently. It cost us a little bit of time in the eventual battle, if you will, with AWS.”

Amazon’s EC2 computing service and S3 storage service debuted in 2006, and Microsoft introduced its first Azure offerings in 2008. But Windows Azure, the most direct competitor to Amazon’s core infrastructure offerings at the time, did not become available until 2010.

In 2011 Satya Nadella took charge of the organization that included Azure, and in 2014 he replaced Ballmer as Microsoft’s CEO. Since then, Nadella has emphasized the role of cloud in Microsoft’s business. In 2017 Nadella has said he wished Microsoft had started earlier in cloud, and last year he gave Ballmer credit for supporting the company’s cloud effort.

“You see it all coming to fruition,” Ballmer said on Thursday. “Because it was a set of pain points that may not have been acknowledged as that, but then you stay patient with it.”

Ballmer also said Microsoft should have built phones sooner if it was going to be compete in that market. In 2015 the company wrote down $7.6 billion in goodwill and assets as it restructured its phone hardware unit after buying Nokia’s devices business for $9.5 billion in April 2014, less than three months after Nadella had taken over. The deal came more than six years after Apple had released the initial iPhone. By late 2017, Microsoft’s phone revenue was “immaterial,” according to a presentation to investors.

Ballmer joined the discussion alongside Sriram Krishnan, a general partner at venture-capital firm Andreessen Horowitz and former Microsoft program manager, and Steven Sinofsky, an Andreessen board partner who was a top executive at Microsoft under Ballmer. The firm announced an investment in Clubhouse last month following appearances from founders Marc Andreessen and Ben Horowitz and an increase in users with diverse backgrounds. The app is currently only available on Apple’s iOS devices.