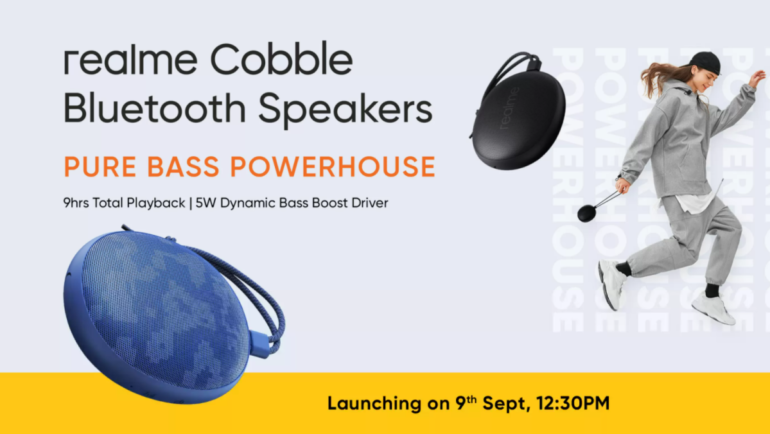 Realme Cobble and Realme Pocket Bluetooth speakers will be launched in India on September 9. With this launch, Realme will enter a new segment in India after entering the laptop and tablet segment.

Realme has been one of the most ambitious tech brands in India. While it is the fastest-growing smartphone brand in the world, Realme’s 1+5+T strategy allowed the company to launch several products under different arrival and create an ecosystem of products such as true wireless earbuds, smart TVs, smart bulb, laptops, etc.

Realme Cobble and Realme Pocket Bluetooth speakers which are slated to launch in India on September 9 are available in Malaysia already and the teaser page on the Indian website and Flipkart have revealed complete information of these two Bluetooth speakers. On the same day, Realme will also launch its first Realme Pad, Realme 8i and Realme 8s budget smartphones.

The Realme Cobble Bluetooth speaker comes with a 5W dynamic bass boost driver along with a dedicated bass radiator. In terms of battery life, this speaker is rated to last up to 9 hours on a single charge with its built-in 1,500mAh battery. The speaker also offers three equalizer presets like its TWS – Dynamic, Bass, and Bright.

The Realme Cobble Bluetooth speaker is priced at RM 79 in Malaysia which is around Rs 1,400.

The Realme Pocket is a Bluetooth speaker with a 3W dynamic bass boost driver. It will bring 6 hours of battery life with its 600mAh battery. It comes in Desert White and Classic Black colour options weighing just 113 grams.

Other prominent features include Bluetooth 5.0, IPX5 rating, stereo pairing, Realme link app support, and Type-C charging port. It is priced at RM 99 in Malaysia which is around Rs 1,750.

With this launch, Realme will rival the Mi Outdoor Bluetooth Speaker and Mi Compact Bluetooth Speaker 2 which are priced at Rs 1,499 and Rs 799 respectively. Realme’s AIoT video from 2020 also hinted at the launch of the Realme smart speaker, but we haven’t seen that launching anywhere yet.