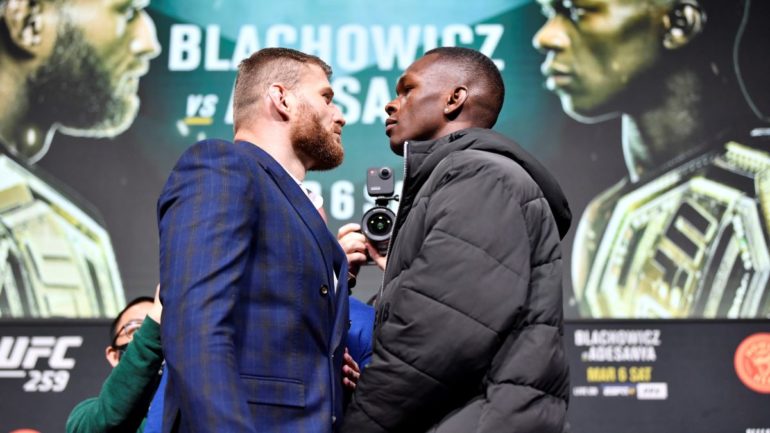 The Apex hosts one of UFC’s deepest cards to date on Sunday, boasting a mouth-watering light heavyweight title clash as its headline act – here’s how to find a UFC 259 live stream and watch Jan Blachowicz vs Israel Adesanya online, plus the start time and much more.

The main event sees 205lbs top dog Blachowicz place his belt on the line against reigning middleweight king Adesanya, as the Nigerian fighter bids to become a simultaneous two-division champ.

Now looking to defend his title for the first time, Blachowicz looks set to give Adesanya the toughest fight yet of his career.

As well as the “champion vs champion” main event, tonight’s card also features two further title fights, with bantamweight champ Petr Yan putting his title on the line against Aljamain Sterling, while two-division titleholder Amanda Nunes will be defending her featherweight belt against Megan Anderson.

How to watch Blachowicz vs Adesanya from outside your country

Read on for specific information on who is showing a UFC 259 live stream on TV and PPV in different countries including the US, UK, Canada, New Zealand and Australia.

But the first thing worth mentioning is that anyone who finds themselves abroad for the event can still watch via their usual home broadcaster or service by using a VPN.

Otherwise known as a Virtual Private Network, it’s a nifty bit of software that lets you access content from your home country completely legally. Crucially, this means you and won’t have to loiter around the internet’s sketchier corners for a stream.

UFC 259 live stream: how to watch Blachowicz vs Adesanya in the US

You’ll need to be subscribed to ESPN+ in order to watch UFC 259 in the US. However, if you aren’t already a subscriber, there’s an easy way to save cash on your membership and PPV fight at the same time.

You can buy a year’s subscription to ESPN+ and access to this weekend’s fight for just $89.98. Considering members usually have to pay $69.99 for this fight on top of their subscription (that comes in at $59.99 a year), that’s an excellent offer. If you’re already a member you can pick up that PPV ticket by itself for the usual price of $69.99.

Early prelim coverage starts at 6.30pm ET / 3.30pm PT, followed by the main card at 10pm ET / 7pm PT, with Usman and Burns expected to enter the Octagon some time from 12am ET / 9pm PT – depending on the pace of the other fights.

A subscription to ESPN+ also opens up access to live UFC Fight Nights, alongside original content including Dana White’s Contender Series, UFC Destined, and Ariel & The Bad Guy, plus classic fights, replays, and there’s also the perk of fewer commercials.

How to watch Blachowicz vs Adesanya: live stream UFC 259 in the UK tonight

BT Sport has exclusive broadcast rights to UFC events right now, and the great news is that this weekend’s UFC 259 action won’t be a PPV event in the UK!

You’ll need to tune into BT Sport 2 for all the action from Vegas, with coverage beginning on the channel with their build-up preview show at 12.30am followed by prelims starting at 1am on Sunday ahead of the main show at 3am. Blachowicz vs Adesanya are expected to enter the Octagon from 5am.

There are a host of pay-per-view providers offering a Blachowicz vs Adesanya live stream in Canada this month.

You’ll find UFC 259 and Blachowicz vs Adesanya available on PPV in Australia, with the main providers being Foxtel Main Event and – for streamers and cord-cutters – Kayo Sports.

For those looking for a streaming-only option, Kayo is the way to go and you can now pre-order the PPV card here – it costs AUD$54.95, the same as on Main Event.

The main Blachowicz vs Adesanya card is set to take place at 2pm AEDT on Sunday, March 7 which should mean that you won’t have to get up early to catch the main event.

Blachowicz and Adesanya are expected to make their way toward the Octagon around 4pm.

Blachowicz vs Adesanya live stream: how to watch UFC 259 in New Zealand now

Sky Arena is offering New Zealand viewers a Blachowicz vs Adesanya live stream – with the PPV priced at NZ$39.95 for all the main card action.

You’ll want to make sure you’re watching from at least the 4pm NZDT main card start time on Sunday, March 7 to get all the action.

The headline Blachowicz vs Adesanya is expected any time from 6pm NZDT, depending on how the rest of the card plays out.

When is Blachowicz vs Adesanya? UFC 259 date and time

Blachowicz vs Adesanya preview and predictions

The meteoric rise of Adesanya has seen him become one of MMA’s biggest names over the course of just twenty unbeaten fights, with many expecting him to achieve his stated aim of one day moving up to heavyweight and becoming UFC’s first ever triple-weight title holder. But can Blachowicz stop him in his tracks?

Eight wins in his last nine outings, Polish star Blachowicz’s sheer grit has seen him rise from the decidedly inauspicious start to his his UFC career which saw him register a shaky 2-4 record, to becoming a rock solid champ.

Efficient as well as deadly – Blachowicz lands an impressive 52 percent of his takedown attempts  – his current four-fight winning streak is the third longest active run of wins in the light heavyweight division just behind Magomed Ankalaev (six) and Glover Teixeira (five).

It’s a tough one to call and UFC has seen some big upsets of late, but the unbeaten Adesanya should just have enough to conquer Blachowicz to our eye.

Who is Jan Blachowicz?

Born in Warsaw, Poland, Jan Blachowicz claimed the light middleweight title last September during the co-main event of UFC 253, where he pulled off a second-round KO victory over Dominick Reyes.

The victory marked an incredible turnaround for the 38-year-old, who began his career in the big leagues with four defeats in his first six bouts.

In Apps and WebCompaniesComputer science
on 4 May 20219 min read

He since gone on to win eight of his last nine since suffering consecutive defeats to Alexander Gustafsson and Patrick Cummins with tonight’s git marking the first defence of his title.

Who is Israel Adesanya?

Nigerian-born, New Zealand resident Israel Adesanya has made a lightning ascent through the UFC ranks, going from newcomer to middleweight champ in under two-years.

Nicknamed ‘The Last Stylebender, the huge anime fan has a 20-0 career record with an 9-0 in the Octagon. All of those eight UFC victories have come since February 2018.

The 31-year-old claimed his middleweight title in October 2019 by knocking out Robert Whittaker, and has since made two successful defences.

Looking to claim the light middleweight title tonight, Adesanya is on record as saying he aims to step up to heavyweight in the near future and add an unprecedented third division belt to his collection.

Blachowicz vs Adesanya latest odds: who is the favorite to win?

Despite Blachowicz’s champ status at this weight, Adesanya is installed as the clear favourite with punters and bookies alike, with Paddy Power offering 4/9 on the Last Stylebender to win, compared to 7/4 for the Pole to defend his belt.

Adesanya dominated Paulo Costa in second defence and most recent outing, with that fight culminating in a TKO at 2 minutes, 59 seconds of the second round in the main event of UFC 253 in Abu Dhabi.

Blachowicz, meanwhile, claimed the light middleweight title in his last appearance in the Octagon in September last year at UFC 253, beating Dominick Reyes via TKO in the second round – a showing that also earned him the Performance of the Night award.

There’s plenty of value for those laying out for this weekend’s pay-per-view, with two further title fights beyond the main event.

Women’s featherweight champion Amanda Nunes will be putting her title on the line against Megan Anderson.