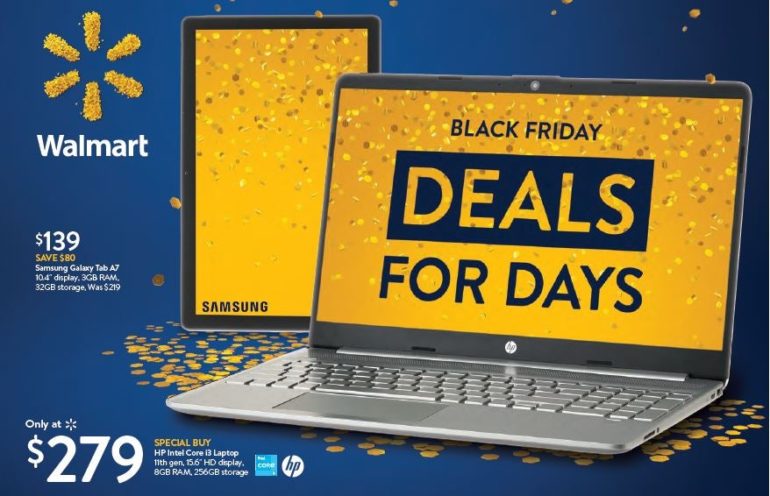 Following in the wake of Best Buy’s announcement last week about its Black Friday plans, including early deals preceding Thanksgiving, Walmart is making its intentions clear today, including early sales events of its own. In addition to the traditional sale on Black Friday itself, the retailer has planned two events earlier in November with some eye-opening deals on computing devices.

Both events start online and then continue in brick-and-mortar locations a couple of days later. The first sale kicks off online on November 3 at 7 p.m. ET and then hits stores at 5 a.m. on November 5 with a massive sale on a Samsung Chromebook 4 for just $87. While Walmart’s ad claims a regular price of $199, it’s currently priced at $129, but that’s still a hefty discount for the Chromebook, which features an Intel Celeron N4000 processor, 4GB of RAM, 32GB of storage and a 11.6-inch display.

Other tech deals from the first early Black Friday sale include another Chromebook deal if you don’t mind spending more for a 2-in-1 laptop. The HP x360 Chromebook — complete with Celeron N4000 CPU, 4 gigs of RAM, 64GB of storage and a 14-inch touchscreen — is currently showing at $299 on Walmart.com, but will be available for $179 during the sale. The iPhone 12 mini will see its price slashed to $299 from $599, though it requires a payment plan and activation with either AT&T or Verizon as your carrier.

The other early event features a couple of Windows laptop and Android tablet deals, beginning online at 7 p.m. ET on November 10 ad carrying over to stores on November 12 at 5 a.m. The two Windows systems on sale are both from HP: one is a 15.6-inch notebook with 11th-generation Intel Core i3 processor, 8GB of memory, and 256GB of storage for $279 instead of the $429 current price; the other is similarly sized with the same amount of RAM and storage, but the display is full HD and the processor is bumped up to a Core i5 chip for $379. The latter laptop doesn’t seem available currently at Walmart, but a similar machine on HP’s own website runs $540.

In AICompaniesRobotics
on 31 August 20219 min read

Walmart is taking $30 off its house brand onn 10.1-inch tablet, lowering the price during the second early Black Friday event to just $79. It’s also slashing $80 from the price of a 10.4-inch Samsung Tab A7 Android slate, reducing it from the $219 current price. No doubt they’ll be quite a few more of these deals on laptops and tablets when Walmart drops its ad for the official Black Friday event sometime soon, so check back here for updates.