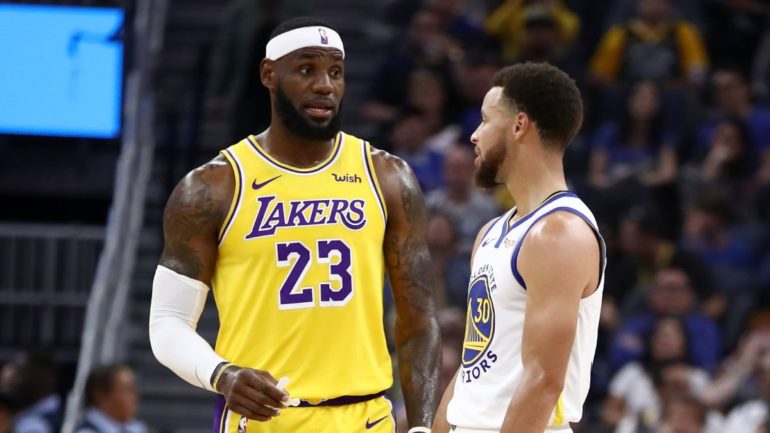 The NBA Play-In Tournament hasn’t been universally well-received, but tonight’s must-watch Golden State Warriors vs Los Angeles Lakers game more than justifies the format for most hoops fans. Read on as we explain how to get a Warriors vs Lakers live stream and watch the NBA Play-In game online from anywhere.

Steph Curry and LeBron fighting for their lives just for a playoff spot was an inconceivable prospect at the start of the season, but that’s exactly what’s happening today.

The reigning champions’ form dropped off a cliff after LeBron’s mid-season ankle sprain, and there was another scare at the weekend. But the Lakers’ leader should be refreshed and ready to do what he always does.

If there’s one team they wouldn’t have wanted to face in the Play-In though, it’s the Warriors, led by NBA top-scorer Steph Curry. Both teams are in excellent form, with the Warriors on a six-game winning streak and the Lakers coming into this clash off the back of five consecutive victories.

The Lakers are the favorites, having trounced the Warriors twice in the regular season to finish one place above their California rivals, but the Dubs came out on top at the Staples Center in January.

Tonight’s winner will qualify for the playoffs as the Western Conference’s No. 7 seed. The losing team, however, will get another shot against the winner of the 9/10 game. Read on for how to watch the Warriors vs Lakers online and get an NBA Play-In live stream from anywhere.

How to watch NBA Play-In games from outside your country

Scroll down for all the ways you can watch the Warriors vs Lakers game online in a number of countries around the world. But first, you should know that if you’re abroad at any point during the NBA Play-In tournament, you probably won’t be able to watch the hoops like you normally would at home.

This is because of geo-blocking, a digital restriction that means certain streaming services are only accessible in the region they’re based in.

The simplest and most reliable solution is to use a VPN service to change your IP address to a different location. This will generally let you tune in to your local coverage, just as you would from home, and means you don’t have to trawl the sketchier corners of the internet for an illegal stream.

Use a VPN to watch NBA basketball online from anywhere

Warriors vs Lakers live stream 2021: how to watch the NBA Play-In game online

ESPN is showing the Warriors vs Lakers NBA Play-In game, which tips off at 10pm ET / 7pm PT. If you have ESPN as part of a cable package, you’ll be able to stream the game directly through the ESPN website.

How to watch NBA without cable

Cord-cutters are in luck, too, as you can get ESPN without having an expensive cable package.

The cheapest alternative is Sling TV. Its Orange package costs $35 a month and gets you all the NBA Play-In games via ESPN and TNT – and new subscribers can get a fantastic bargain – right now you can save big bucks with this Sling TV deal, which lets you get a whole month of Sling Orange for $10.

Sling also offers NBA TV through the $11 p/m Sports Extra add-on, which will come in handy when the playoffs start.

Another great option for basketball fans is fuboTV, which offers ESPN, but also TNT, NBA TV and ABC – all of which you need to watch the NBA Play-In and NBA playoffs. Packages start from $64.99 a month, but there’s a FREE fuboTV trial you can try to see if it’s right for you.

New or existing subscribers to US streaming services can still access the platform of their choice from abroad by checking out a quality VPN and following the instructions above.

Sky has the rights to the NBA in the UK, so you can watch the Warriors vs Lakers game on Sky Sports.

It’s a late start though, with tip-off set for 3am BST in the early hours of Thursday morning (or late on Wednesday night).

Subscribers also get to watch on the move using the Sky Go app, which is available on nearly all modern phones, tablets, laptops, PCs and consoles.

For those without Sky, the best option is a Now TV Sky Sports Monthly Pass, which includes all 11 channels.

How to watch Warriors vs Lakers: live stream NBA Play-In in Canada

In Canada, you can watch the Warriors vs Lakers game on TSN, which is the home of all of the NBA Play-In action. The game tips off at 10pm ET / 7pm PT.

Its TSN Direct streaming service can be had from just $7.99 a day or (much better value) $19.99 a month and can be purchased by anyone – regardless of whether you have the channel as part of a pay TV package in the country or not.

Having said that, existing subscribers should note they can log-in to watch TSN live streams at no extra charge with details of their provider. There’s also an app for convenient on-the-go streaming, an annual plan deal that saves you some serious money, and the very Canadian problem of all stated pricing being before tax.

Canadian abroad? Then you can use a VPN to magically find themselves back in Canada to live stream NBA Play-In coverage just like they would at home.

Warriors vs Lakers live stream 2021: how to watch NBA Play-In online in Australia

Basketball fans Down Under can live stream the Warriors vs Lakers game online through slick streaming platform Kayo, with tip-off set for 12pm AEST on Thursday afternoon.

Newbies can take advantage of a FREE Kayo trial to see if the service is right for them. For those who decide to keep it, Kayo price plans start from a super affordable AUD$25 a month – really good value considering how much premium live sports action it hosts.

If you’re a Foxtel customer, you can also watch the big game on ESPN.

Not in Australia? Aussies abroad looking to watch an NBA Play-In live stream should find that a good VPN helps them access their home streaming services wherever they are.