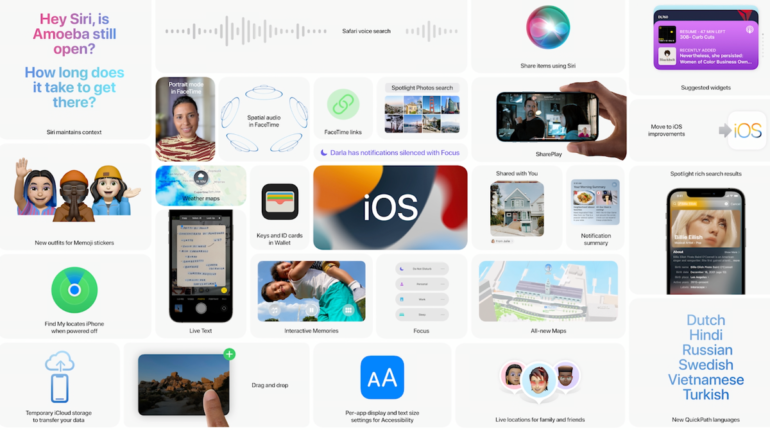 Apple on Monday unveiled a host of new features for its iPhone operating system with the release of iOS 15. The latest release includes on-device intelligence for a range of new features and capabilities, such as more engaging FaceTime calls and the ability to organize and prioritize notifications.

The new release also includes updates to Apple Wallet to let users store keys for places like their home, work, or at participating locations like Hyatt hotels. Users will also be able to store state IDs within their phone (within participating states) and eventually use it to move through security checkpoints at US airports.

The new features were designed with the intent of helping users stay connected, find focus, and explore the world, Apple SVP Craig Federighi said during the WWDC keynote address.

The iOS updates start with new features for FaceTime. “We’ve all found ourselves using video calling for just about everything,” Federighi said.

The new features largely resemble those found in popular video conferencing products like Zoom. That includes spacial audio, which creates a “sound feel that helps conversations flow as easily as they do face to face,” Federighi said. The feature makes a user’s voice sound like it’s coming from the direction in which they’re positioned on the video call. Additionally, the voice isolation feature uses machine learning to block out ambient noise. By contrast, wide spectrum sound picks up your voice and all of the sounds around you.

For an improved video experience, FaceTime now offers a grid feature to show everyone in a room in an equal-sized tile. Portrait mode blurs the background. The new FaceTime links capability generates a link for a FaceTime call and allows you to share it anywhere, in places like Messages, email, WhatsApp, or a calendar. The links feature works with Android and Windows devices.

Meanwhile, the new SharePlay on FaceTime is a set of features that helps users enjoy shared experiences on a call, such as listening to music, watching a TV show or sharing a screen. For instance, a user on a call could share a song with Apple Music, and all of the users on the call would hear the song played in sync. Each user can control the music playing, and they can add songs to a shared queue.

SharePlay is unique, Apple says, because it moves fluidly through the whole Apple ecosystem. If you want to continue a conversation while a song is playing, for instance, users can jump into Messages. Users could also extend their screen to Apple TV and use SharePlay across multiple devices with everything and everyone in sync. SharePlay is designed to work with other apps and streaming services with an API, including Disney Plus, Hulu, HBO Max, Twitch, TikTok, and ESPN Plus.

The iOS 15 updates also include tools to focus — such as an improved notification experience. Notifications have a new look, with larger icons for apps and contact photos for people.

To help people manage a large number of notifications, iOS 15 introduces the Notification Summary, a collection of notifications that users can schedule to be delivered at a certain time, ordered by priority. Notifications from people will not be included in the summary, to ensure they’re not missed.

Users can use Do Not Disturb to completely silence notifications, with what’s effectively an “away message” delivered automatically to anyone contacting you via Messages. For truly urgent messages, there’s a way to get through, Apple says.

The new “Focus” feature allows users to filter notifications for specific contexts. For instance, a focus on work would only deliver notifications from colleagues or work-related apps. A Home focus might only deliver messages from friends and family or apps like Calm. Apple can intelligently suggest using Focus for certain contexts, such as your regular trip to the gym.

In Apps and WebCompaniesSmartphones
on 21 December 20202 min read

The new iOS release also brings more intelligence to the camera with Live Text — a feature similar to Google’s Lens feature. It can capture text from a photo, allowing users to select and copy the text into a message or to use the text for a web search. Live Text understands seven languages and works across iPhone, iPad, and Mac. It also recognizes objects and scenes.

Photos are also getting more intelligent features, such as Spotlight, which helps users quickly search for people, locations, or even text from a photo. The new Memories feature intelligently curates your favorite moments.

The new Apple Wallet improves the experience of accessing car keys with ultra-wideband support. This eliminates the need to take your phone out of your bag or pocket when starting your car.

Apple is also bringing keys to everyday places to Wallet, starting with your home and places of work. The latest version also helps you travel with hotel keys — you can automatically receive your key when your room is ready. Starting this fall, Hyatt will roll this out to more than 1,000 properties worldwide.

Apple is also bringing encrypted identity cards to Wallet. Users can scan state IDs in participating states. The TSA is working to enable airport security checkpoints as the first place you can use your digital ID.

When will iOS 15 be available?

Apple is expected to officially launch iOS 15 alongside the next iPhone series in fall 2021.