Soaking up the sun with artificial intelligence 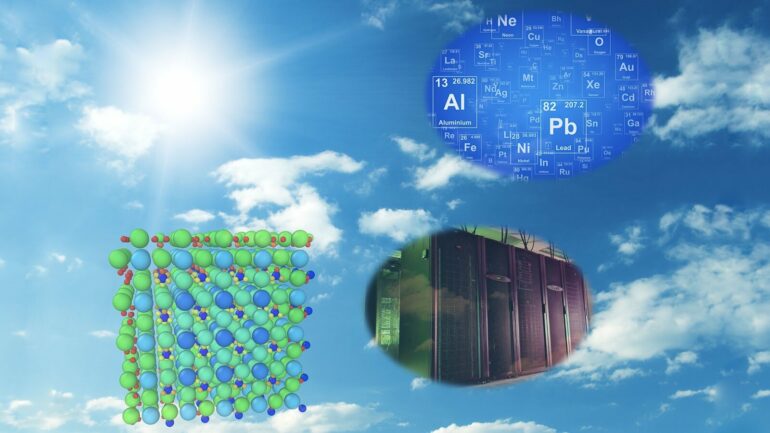 The sun continuously transmits trillions of watts of energy to the Earth. It will be doing so for billions more years. Yet, we have only just begun tapping into that abundant, renewable source of energy at affordable cost.

Solar absorbers are a material used to convert this energy into heat or electricity. Maria Chan, a scientist in the U.S. Department of Energy’s (DOE) Argonne National Laboratory, has developed a machine learning method for screening many thousands of compounds as solar absorbers. Her co-author on this project was Arun Mannodi-Kanakkithodi, a former Argonne postdoc who is now an assistant professor at Purdue University.

“According to a recent DOE study, by 2035, solar energy could power 40% of the nation’s electricity,” said Chan. “And it could help with decarbonizing the grid and provide many new jobs.”

Chan and Mannodi-Kanakkithodi are betting that machine learning will play a vital role in realizing that lofty goal. A form of artificial intelligence (AI), machine learning uses a combination of large data sets and algorithms to imitate the way that humans learn. It learns from training with sample data and past experience to make ever better predictions.

In the days of Thomas Edison, scientists discovered new materials by the laborious process of trial and error with many different candidates until one works. Over the last several decades, they have also relied on labor-intensive calculations requiring as long as a thousand hours to predict a material’s properties. Now, they can shortcut both discovery processes by calling upon machine learning.

At present, the primary absorber in solar cells is either silicon or cadmium telluride. Such cells are now commonplace. But they remain fairly expensive and energy intensive to manufacture.

The team used their machine learning method to assess the solar energy properties of a class of material called halide perovskites. Over the past decade, many researchers have been studying perovskites because of their remarkable efficiency in converting sunlight to electricity. They also offer the prospect of much lower cost and energy input for material preparation and cell building.

“Unlike silicon or cadmium telluride, the possible variations of halides combined with perovskites are essentially unlimited,” said Chan. “There is thus an urgent need to develop a method that can narrow the promising candidates to a manageable number. To that end, machine learning is a perfect tool.”

The team trained their method with data for a few hundred halide perovskite compositions, then applied it to over 18,000 compositions as a test case. The method evaluated these compositions for key properties such as stability, ability to absorb sunlight, structure that does not break easily due to defects, and more. The computations agreed well with relevant data in the scientific literature. Also, the findings whittled down the number of compositions worthy of further study to about 400.

The next step will be to test the predictions using experiments. The ideal scenario would be to use an autonomous discovery laboratory, such as Polybot at Argonne’s Center for Nanoscale Materials (CNM), a DOE Office of Science user facility. Polybot brings together the power of robotics with AI to drive scientific discovery with little or no human intervention.

By using autonomous experimentation to synthesize, characterize and test the best of their few hundred prime candidates, Chan and her team anticipate they can also improve the current machine learning method.

Meta’s AI chatbot hates Mark Zuckerberg, but why is it less bothered about racism?

“We are truly in a new era of applying AI and high performance computing to materials discovery,” said Chan. “Besides solar cells, our design methodology could apply to LEDs and infrared sensors.”

This research is reported in an article in Energy & Environmental Science.


Citation:
Soaking up the sun with artificial intelligence (2022, August 31)