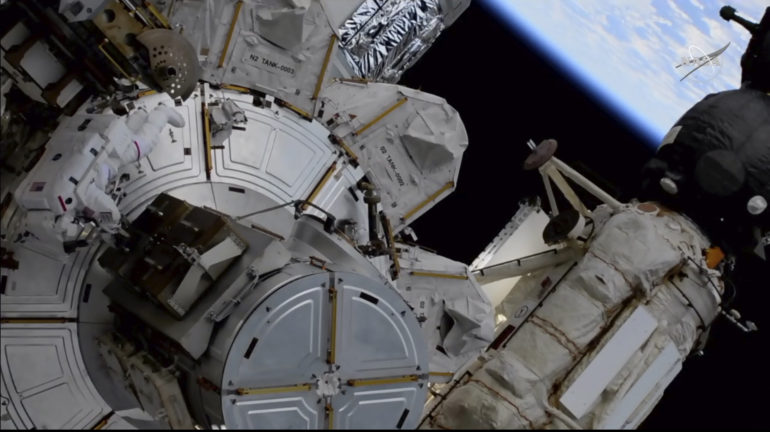 Spacewalking astronauts completed the first round of prep work Friday for new solar panels, part of a major power upgrade at the International Space Station.

NASA’s Kate Rubins and Japan’s Soichi Noguchi installed mounting brackets and struts for the improved solar wings due to arrive in June. They also tightened some sticky bolts that hampered Sunday’s spacewalk and left some duties undone.

Toward the end of the seven-hour spacewalk, Rubins reported a mark on the index finger of her right glove, where she had earlier said there was some peeling and perhaps a tiny hole in the outer layer.

“I don’t know what to think about the glove. But it’s just kind of a pinpoint hole,” she told Mission Control.

Rubins said she was “mildly concerned” about going too far from Noguchi because of her glove, and he accompanied her back to the hatch. Mission Control called it quits at that point and told the astronauts to skip extra chores.

“At no time was she in any danger,” he said in an email.

At Mission Control’s request, crewmate Victor Glover took photos of the glove while Rubins was still in her spacesuit.

NASA is enhancing the space station’s power grid to accommodate more astronauts and experiments, now that SpaceX is launching crews and Boeing should be too by year’s end. The eight solar panels have degraded over time; the oldest were launched 20 years ago.

The six new solar wings—smaller but more efficient—will fit over the older ones and boost the station’s power capability by up to 30%. Boeing is supplying the panels, which will be launched in pairs by SpaceX over the next year.

As the spacewalk ended, Mission Control congratulated Noguchi for having the longest gap between spacewalks: 15 1/2 years. His previous three spacewalks occurred in 2005, during the first shuttle flight following the 2003 Columbia disaster.

This should be the last spacewalk for the station’s current residents, whose half-year missions are coming to a close.

In Apps and WebComputer science
on 29 January 202113 min read

Rubins will return to Earth in mid-April in a Russian capsule, along with two Russians. Noguchi, Glover and two other NASA astronauts will fly SpaceX back in late April or May.