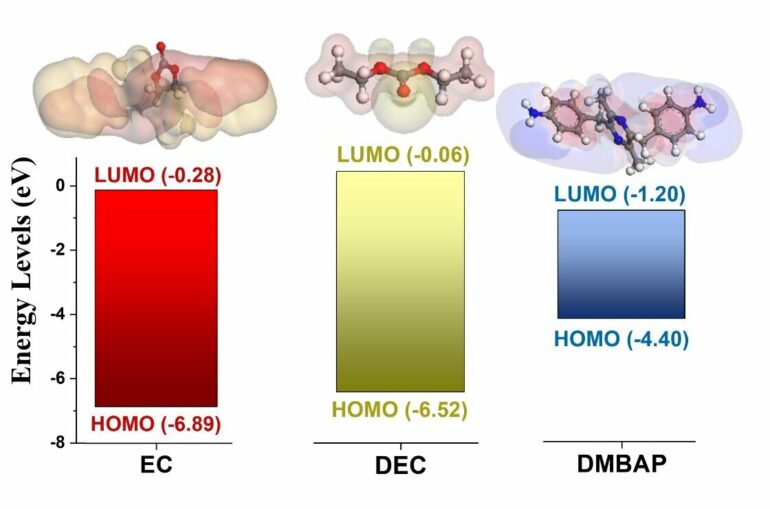 High energy density lithium-ion (Li-ion) batteries are indispensable for powering electric and hybrid vehicles, next-generation electronics, and power grids. These Li-ion batteries contain high energy density cathodes based on transition metal oxides. Among numerous investigated potential materials, the LiNi1/3Mn1/3Co1/3O2 cathode has been shown to deliver the best performance at a high potential of 4.5 V versus Li/Li+ with high reversible capacity.

However, at such high potentials, the carbonate species in commercial electrolytes—ethylene carbonate and diethyl carbonate—undergo excessive oxidative decomposition. This, in turn, forms a thick cathode electrolyte interphase (CEI) on the cathode surface, severely compromising its performance. Consequently, researchers have explored electrolyte additives as a way to restrict performance degradation by masking and stabilizing the cathode surface. However, currently available options pose safety and environmental hazards.

Recently, a team of researchers, led by Professor Noriyoshi Matsumi from Japan Advanced Institute of Science and Technology (JAIST), microbially synthesized 2,5-dimethyl-3,6-bis(4-aminobenzyl)pyrazine (DMBAP), a bio-based compound, as a potential additive for stabilizing the LiNi1/3Mn1/3Co1/3O2 cathodes. What sets their approach apart is the fact that, unlike existing additives, DMBAP is sustainable, eco-friendly, cost-effective, and non-toxic.

“Although biomass-derived materials attract both researchers and the society in general, their applications in electric devices, including lithium-ion batteries, are still limited. This study focuses on novel microbial metabolites, particularly the unique pyrazine-derived diamine DMBAP from the gene cluster of Pseudomonas fluorescens SBW25, discovered in collaboration with Prof. Masuo. Its role as an electrolyte additive could impact the fields of sustainability and smart-cell industry,” explains Prof. Takaya, speaking of the motivation behind the study.

An initial theoretical evaluation revealed that the highest occupied molecular orbital (HOMO) of the DMBAP molecule was located at a higher position compared to a general-purpose electrolyte. This allowed it to be oxidized easily at the cathode surface and form a protective layer over it. In addition, the diamine in DMBAP prevented the dissolution of CEI.

Based on these results, the team concluded that the DMBAP underwent sacrificial oxidative decomposition, forming an organic passivation armor on the cathode surface. This, in turn, restricted excessive electrolyte degradation and stabilized the structure of transition metal oxides on the cathode.

In effect, this virtuous phenomenon increases the operating potential window of LiNi1/3Mn1/3Co1/3O2 cathode to 4.5 V versus Li/Li+. Moreover, the stabilizing effect of DMBAP on the battery system was remarkable for both half-cell and full-cell configurations.

In Apps and WebComputer science
on 11 February 20213 min read