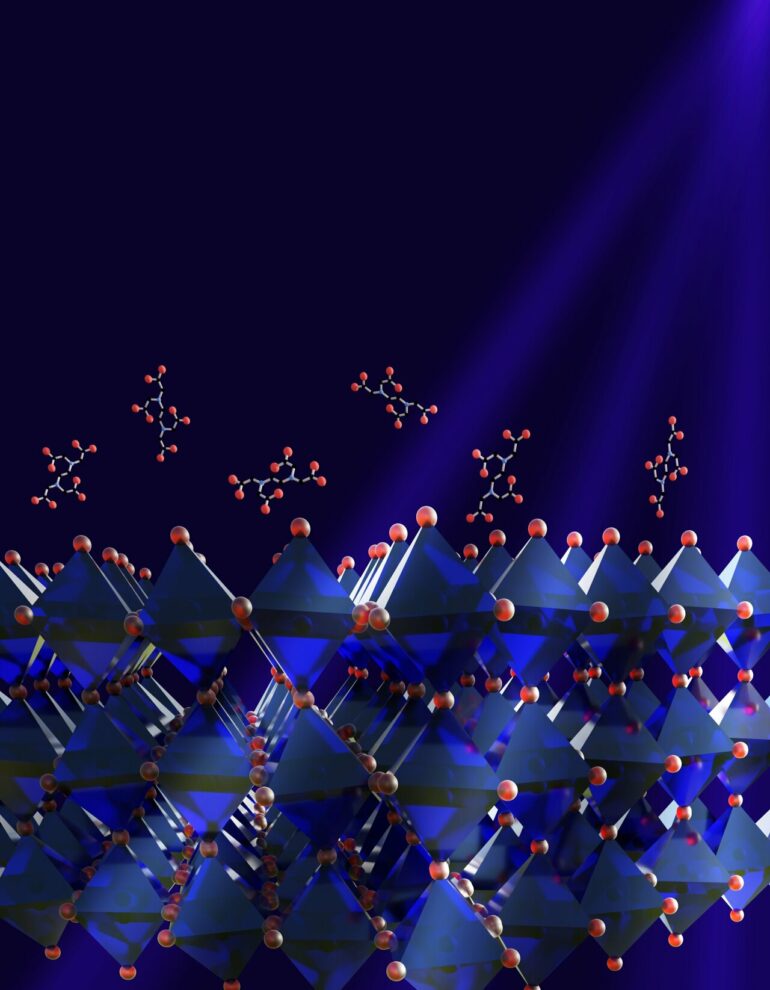 Researchers have developed a method to stabilize a promising material known as perovskite for cheap solar cells, without compromising its near-perfect performance.

The researchers, from the University of Cambridge, used an organic molecule as a ‘template’ to guide perovskite films into the desired phase as they form. Their results are reported in the journal Science.

Perovskite materials offer a cheaper alternative to silicon for producing optoelectronic devices such as solar cells and LEDs.

There are many different perovskites, resulting from different combinations of elements, but one of the most promising to emerge in recent years is the formamidinium (FA)-based FAPbI3 crystal.

The compound is thermally stable and its inherent ‘bandgap’ – the property most closely linked to the energy output of the device—is not far off ideal for photovoltaic applications.

For these reasons, it has been the focus of efforts to develop commercially available perovskite solar cells. However, the compound can exist in two slightly different phases, with one phase leading to excellent photovoltaic performance, and the other resulting in very little energy output.

“A big problem with FAPbI3 is that the phase that you want is only stable at temperatures above 150 degrees Celsius,” said co-author Tiarnan Doherty from Cambridge’s Cavendish Laboratory. “At room temperature, it transitions into another phase, which is really bad for photovoltaics.”

Recent solutions to keep the material in its desired phase at lower temperatures have involved adding different positive and negative ions into the compound.

“That’s been successful and has led to record photovoltaic devices but there are still local power losses that occur,” said Doherty. “You end up with local regions in the film that aren’t in the right phase.”

Little was known about why the additions of these ions improved stability overall, or even what the resulting perovskite structure looked like.

“There was this common consensus that when people stabilize these materials, they’re an ideal cubic structure,” said Doherty. “But what we’ve shown is that by adding all these other things, they’re not cubic at all, they’re very slightly distorted. There’s a very subtle structural distortion that gives some inherent stability at room temperature.”

The distortion is so minor that it had previously gone undetected, until Doherty and colleagues used sensitive structural measurement techniques that have not been widely used on perovskite materials.

The team used scanning electron diffraction, nano-X-ray diffraction and nuclear magnetic resonance to see, for the first time, what this stable phase really looked like.

“Once we figured out that it was the slight structural distortion giving this stability, we looked for ways to achieve this in the film preparation without adding any other elements into the mix.”

Co-author Satyawan Nagane used an organic molecule called Ethylenediaminetetraacetic acid (EDTA) as an additive in the perovskite precursor solution, which acts as a templating agent, guiding the perovskite into the desired phase as it forms. The EDTA binds to the FAPbI3 surface to give a structure-directing effect, but does not incorporate into the FAPbI3 structure itself.

“With this method, we can achieve that desired band gap because we’re not adding anything extra into the material, it’s just a template to guide the formation of a film with the distorted structure—and the resulting film is extremely stable,” said Nagane.

On the go and at home, HP branches out in Chrome OS line expansion

“In this way, you can create this slightly distorted structure in just the pristine FAPbI3 compound, without modifying the other electronic properties of what is essentially a near-perfect compound for perovskite photovoltaics,” said co-author Dominik Kubicki from the Cavendish Laboratory, who is now based at the University of Warwick.

The researchers hope this fundamental study will help improve perovskite stability and performance. Their own future work will involve integrating this approach into prototype devices to explore how this technique may help them achieve the perfect perovskite photovoltaic cells.

“These findings change our optimisation strategy and manufacturing guidelines for these materials,” said senior author Dr. Sam Stranks from Cambridge’s Department of Chemical Engineering & Biotechnology. “Even small pockets that aren’t slightly distorted will lead to performance losses, and so manufacturing lines will need to have very precise control of how and where the different components and ‘distorting’ additives are deposited. This will ensure the small distortion is uniform everywhere—with no exceptions.”