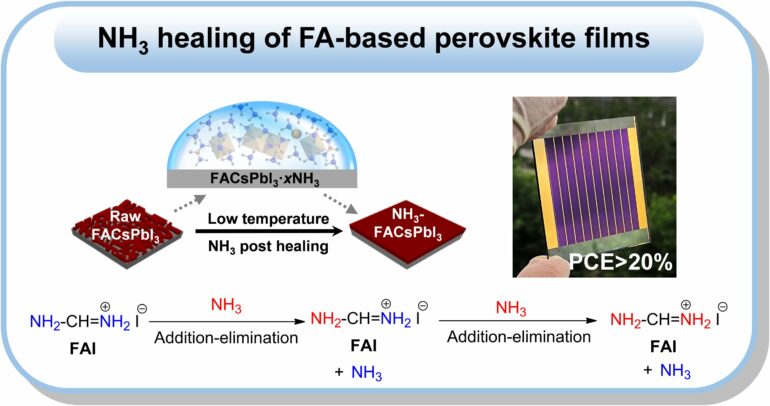 Since 2009, scientists have suspected that perovskite films, which are a combination of organic and inorganic material, could be promising for solar panel construction. Perovskites are very thin films with a specific crystal structure that are very light and flexible, efficient, and cost effective, in comparison to silicon wafers.

However, current limitations, including how to prepare highly uniform perovskite films on a large scale, have prevented the commercialization of the perovskite solar cells.

Recently, researchers from the Qingdao Institute of Bioenergy and Bioprocess Technology (QIBEBT), Chinese Academy of Sciences (CAS), described a new way of processing formamidinium-based perovskite film that relieves some of the limitations by using ammonia treatment to remove pore structures formed during the processing.

The study was published in Nature Communications on July 29.

“The highest power conversion efficiency of perovskite solar cells is comparable to that of widely commercialized silicon-based solar cells. However, how to achieve large-area preparation of highly uniform perovskite film remains a challenge,” said Prof. Pang Shuping from QIBEBT, the corresponding author of the study.

In order to find solutions to the gas healing of the formamidinium-based perovskite films, the researchers first studied the underlying reactions responsible for the challenges. “We have shown that the degradation of formamidinium-containing perovskites is caused by a reaction between the formamidinium cation and aliphatic amines, producing ammonia,” said Wang Xiao, the second author of the study.

In order to avoid the occurrence of side reactions, the researchers used ammonia instead of methylamine gas to treat formamidinium-based perovskite films. Base on this technology, the temperature is lowered so the perovskite film can absorb enough ammonia to transition the film into a flowable intermediate state. In this flowable state, imperfections and hole structures in the raw perovskite film can be healed.

For the ammonia gas healing operation, it is necessary to strictly control the adsorption and desorption rate at low temperatures and very quickly. Another success of using ammonia gas post healing technology is that it can be easily inserted into existing, established commercial technologies.

A prototype of an intelligent underground robotic system for urban environments

Looking ahead, the researchers are thinking about how to properly design the equipment that will be needed to produce the perovskite films using this method, which is a key component for bringing perovskite solar cells to a commercial market.