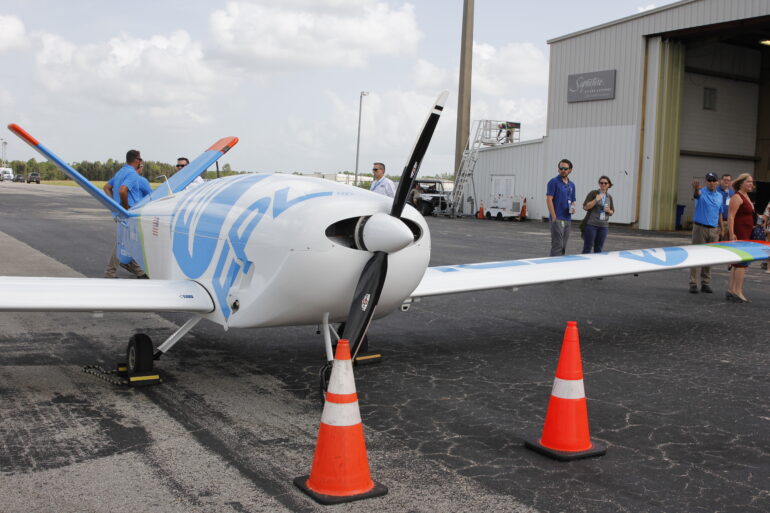 Florida’s primary energy provider is ready to launch a powerful new technology, just ahead of the busiest weeks of the Atlantic hurricane season: a new fixed-wing drone designed fly into tropical storm force winds and speed the restoration of electricity after severe weather.

FPLAir One resembles a small plane and is remotely operated, enabling the utility to capture and deliver images and video of damaged electrical equipment in real time to its command center. It can fly up to 1000 miles (1600 kilometers) at a time—enough to cover the length of Florida twice in the immediate wake of the most damaging storms.

It’s a vast improvement on bucket trucks and hand-held drones when it comes to learning what a storm did at the top of a power pole.

“Rather than going out and try to figure out what’s going on, we’re able to save hours and days on getting the lights on,” Florida Power and Light Chairman and CEO Eric Silagy told The Associated Press.

The drone can even be pre-deployed when a major storm hits, skirting around to its wake and following its path across the utility’s power grid. That data can then point ground crews exactly where they need to go, he said.

While satellites need sunny days to document damage, drones can fly under the cloud cover. And unlike handhelds, FPLAir One can fly in much rougher weather, remaining airborne for 22 hours without refueling.

The importance of getting airborne visuals as quickly as possible became evident 30 years ago this month when Category 5 Hurricane Andrew destroyed much of the power grid along with thousands of homes across a wide swath of Miami-Dade County. Helicopters couldn’t fly until the wind settled, and the extent of the devastation wasn’t immediately clear.

Emerging drone technology showed its potential after Hurricane Irma hit Florida in 2017, when FPL was able to restore power to more than two million customers within 24 hours with the help of a small drone, Silagy said.