Virtual world on display at CES 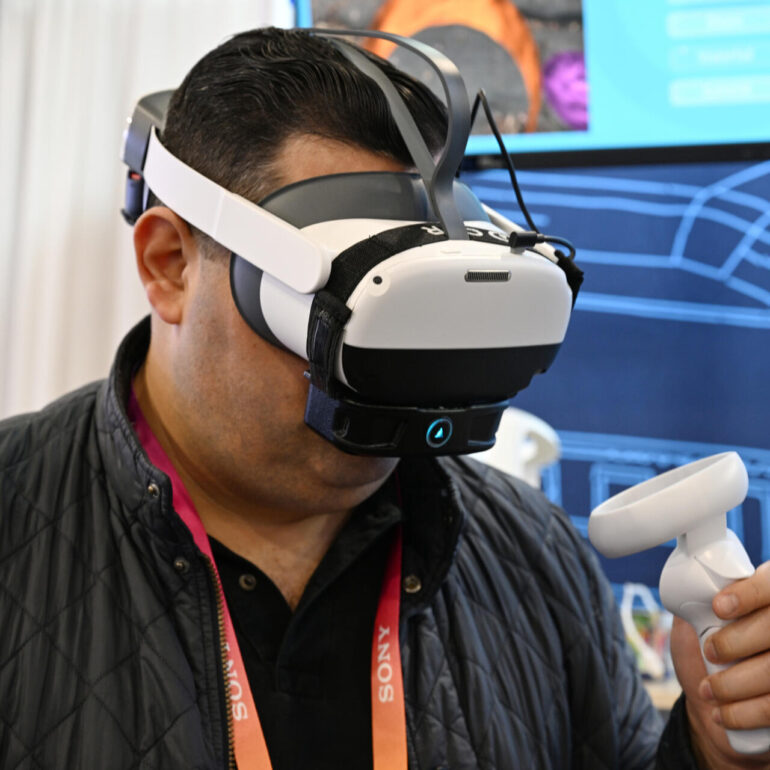 Immersive technologies that can better lives, whether helping people treat dementia or learn to pilot fighter jets, is the future of the metaverse, virtual reality startups say.

Some entrepreneurs at the annual CES gadget fest that ends Sunday in Las Vegas were eager to combine real and virtual worlds to help people stop and smell the roses.

The company OVR Technology has created an accessory for VR headsets that treats users around a faux campfire to whiffs of smoke and toasting marshmallows.

Smell is essential to the metaverse, said OVR Vice President Sarah Socia, because it’s “the only sense that is directly connected to the limbic system, a part of the brain crucial for memory and emotion.”

The Vermont-based startup also has a prototype of another device that can hold scent cartridges created by users through a mobile app.

Japanese “digital scent technology” company Aromajoin is also betting that the metaverse will be a place of many smells.

“It’s like before smartphones, we didn’t know how big a part they would play in our lives,” Aromajoin’s SeonHoon Cho said of scent in the virtual world.

When Facebook changed its corporate name to Meta in late 2021, it signaled faith in the metaverse becoming the center of online life, and the company continues to invest in that future despite profits suffering.

“Metaverse these days is very likely to be met with skepticism,” said Steve Koenig, a vice president at the Consumer Technology Association (CTA), which organizes CES.

“I do think that the term metaverse still is somewhat speculative in nature.”

But the metaverse is starting to take shape through various applications and devices, Koenig said.

The company has designed an AjnaXR mixed reality (virtual and augmented) headset, which is lighter than existing models so it can be worn comfortably for hours.

Businesses use it to teach workers how to handle tools for jobs such as welding and painting, adding joysticks or haptic gloves that bring a hands-on feel to the experience.

“VR has a multiplied impact on the part of the brain where you store things for life,” AjnaLens co-founder Pankaj Raut told AFP.

“It’s like when you learn to ride a bike, you never forget it afterward.”

French startup SocialDream has also designed its own mixed-reality headset adapted to its virtual world content –- imagery that stimulates memory in Alzheimer’s patients.

Founder Thierry Gricourt said he wanted to project the videos “in a bubble.”

His prototype, named Dreamsense, “is not tight on the face, and the lenses do not hurt the eyes,” Gricourt said.

Exclusive: save $250 on the Galaxy Fold and Flip 3 with Samsung’s Black Friday deals

“And there will be sensors that measure emotions in real time.”

The CTA expects 3.1 million VR headsets to be sold in the United States this year in a 20 percent increase from 2022, while sales of augmented reality glasses are expected to double to more than 380,000.

For now, businesses seem to be embracing the technology more enthusiastically than non-gamer consumers.

The company Red 6 is testing an augmented reality system for training fighter jet pilots without the expense or risk of actual flights.

“Right now, the metaverse is kind of a solution in search for problems,” said Red 6 founder Daniel Robinson.

“What we have done is the absolute opposite. We’ve found a really compelling use case for the technology, solving some critical problems that actually need to be solved.”