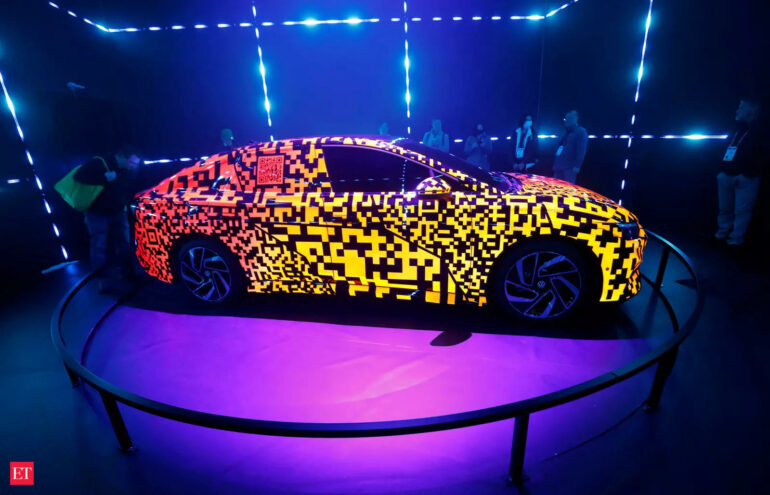 Allowing the driver of an autonomous vehicle to watch a movie, a dealer to sell automobiles from a “virtual” car lot, or an engineer to simulate how a new part fits: the auto industry is getting a tantalizing taste of the metaverse at the huge CES technology show.

One gadget on display in Las Vegas is an in-car television system, developed by French parts maker Valeo, that needs no remote.

To change the channel, drivers or passengers wearing a headset make a simple swipe in the air with their hand, and sensors in the car detect the movement.

For users who dislike the feel of a full headset, sensors on a vehicle’s exterior make it possible to integrate actual pedestrians or landscapes into virtual reality (VR) images, said Ghaya Khemiri, who leads the Valeo project.

And if sensors detect that a person is feeling stressed, the system can offer soothing images to promote relaxation.

At Valeo, “we’re doing a lot of work on electric and autonomous cars, and work a lot on sensors,” Khemiri said. “We had asked ourselves what we could offer (with them) for users’ pleasure.”

The company’s system, still in prototype, would initially be meant for use by passengers, or drivers on break, such as when charging their electric vehicle.

Once vehicles become entirely autonomous, the driver could possibly use it while on the road.

Movies on the windshield

The system allows users to watch a movie or play a video game using a controller, and synchronizes VR content to the movements of the car to prevent nausea.

A new version introduced by Holoride at CES can work in any car.

German automaker BMW on Wednesday presented a concept car for upcoming models that combines “the real and virtual worlds.”

The system showcases a potential project involving augmented reality images projected on the windshield—such as the car’s speed or direction—and could even transform the entire windshield into a screen to watch a movie.

“Although a fully immersive, interconnected metaverse remains years away, mobility stakeholders can already capture real business value from the technologies designed to enable it,” said a report from the McKinsey consulting firm, published on the eve of the CES show, which ends Sunday.

One example: Italian carmaker Fiat in December launched what it called “a metaverse store” where clients can research, configure and even purchase a vehicle with the help of an online assistant.

If technologies continue to improve—notably the “haptic” devices that simulate a touching sensation—consumers could virtually “examine a highly realistic replica of a vehicle, opening its doors, feeling its seats, accelerating onto a highway—just as they would with a real car,” McKinsey said.

And if a vehicle breaks down, a technician could remotely guide a user to make simple repairs.

The metaverse can play a role in designing new products or more easily testing them in differing environments.

Alexandre Corjon, the head of innovation for French parts maker Plastic Omnium, came to CES to explore ways his company could apply the new technologies.

The metaverse could, for example, make it possible to show a client how a recycled material might react in a specific form and “demonstrate to the designer the effect that would have” on the vehicle, he said. It could also show the superiority of a new product.

The group might also experiment with using the metaverse for meetings of its global management team—saving them the hassle of hitting the road in the first place.