Water distribution in fuel cells made visible in 4D 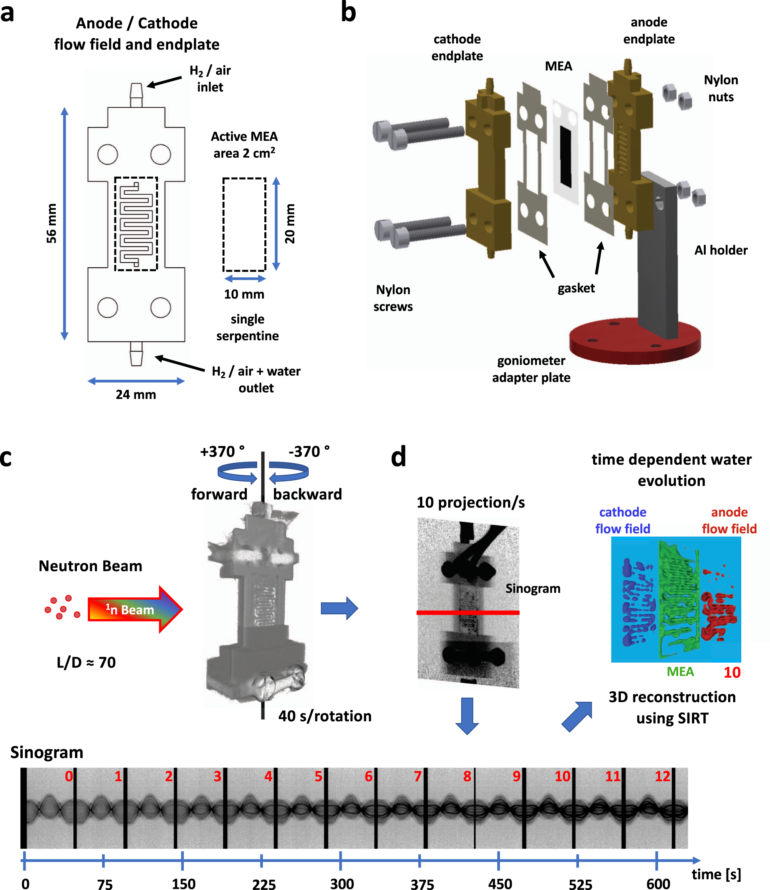 Teams from Helmholtz-Zentrum Berlin (HZB) and University College London (UCL) have visualized the water distribution in a fuel cell in three dimensions and in real time for the first time by evaluating neutron data from the Berlin Experimental Reactor shut down in 2019. The analysis opens new possibilities for more efficient and thus more cost-effective fuel cells.

“In a fuel cell, hydrogen and oxygen are combined to form water. This produces electrical energy,” explains Ralf Ziesche from the imaging group at HZB. “Probably the most important component inside the fuel cell is the membrane.” It is only about 20 micrometers thick (half as wide as a human hair) and connected with various functional layers to form a separation area about 600 micrometers wide inside the fuel cell.

The function of channels

“Some of the water is discharged. Another part must remain in the fuel cell, because the membrane must not dry out,” Ralf Ziesche explains. “But if there is too much water in it, the protons can no longer penetrate the membrane. Dead areas develop at these points, and the reaction can no longer take place there. The efficiency of the entire fuel cell drops.”

To allow hydrogen, air and water to flow in and out, tiny channels are milled into metal plates on both sides of the membrane. These channels can be used to optimize fuel cells and increase efficiency. Hereby, the channel design is the key for a balanced cell wetting and optimal efficiency.

Neutrons for the detection of water

To do this, it is advantageous to have as accurate a picture as possible of the water distribution within the channels. This was the goal of a collaboration between the research group from the Electrochemical Innovation Lab (EIL) at University College London (UCL) and HZB.

“In principle, we subjected the fuel cell to computed tomography, as it is used in medicine,” explains Nikolay Kardjilov from the imaging group at HZB. But while X-rays are used for medical analyses, Nikolay Kardjilov and his team preferred to use neutron radiation. “Because X-rays provide far too low an image contrast between hydrogen and water on one side and the metal structure on the other. Neutrons, on the other hand, are ideal here.”

A highly dexterous robot hand with a caging mechanism

“But our radiation source was the Berlin Experimental Reactor BER II, where we had set up our imaging station CONRAD. And we can’t simply rotate it around our fuel cell sample,” says Nikolay Kardjilov. But with an engineering trick, his team managed to move the fuel cell, including the supply lines for hydrogen and air, the discharge line for water and the electric cables, into the neutron beam. “Until now, neutron imaging has only been able to produce two-dimensional images from inside the fuel cell. Now, for the very first time, we have also made the water distribution visible in three dimensions and in real time,” the physicist is pleased to report.