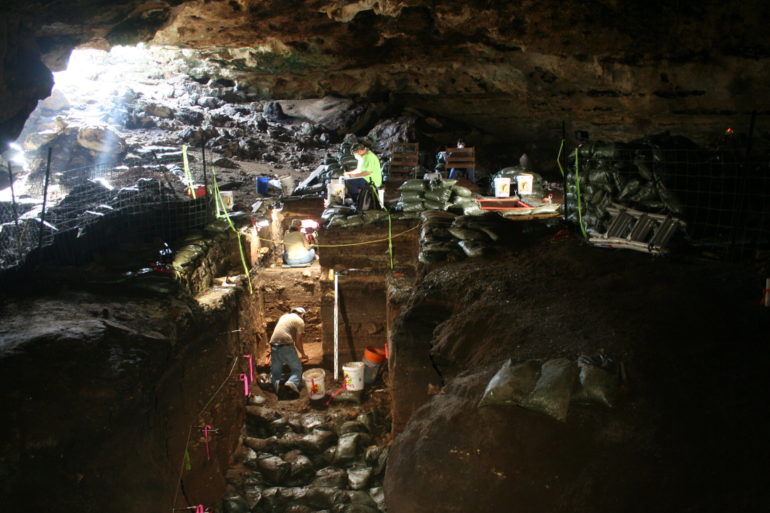 Texas researchers from the University of Houston, Baylor University and Texas A&M University have discovered evidence for why the earth cooled dramatically 13,000 years ago, dropping temperatures by about 3 degrees Centigrade.

The evidence is buried in a Central Texas cave, where horizons of sediment have preserved unique geochemical signatures from ancient volcanic eruptions—signatures previously mistaken for extraterrestrial impacts, researchers say.

The resolution to this case of mistaken identity recently was reported in the journal Science Advances.

“This work shows that the geochemical signature associated with the cooling event is not unique but occurred four times between 9,000 and 15,000 years ago,” said Alan Brandon, Ph.D., professor of geosciences at University of Houston. “Thus, the trigger for this cooling event didn’t come from space. Prior geochemical evidence for a large meteor exploding in the atmosphere instead reflects a period of major volcanic eruptions.”

After a volcano erupts, the global spread of aerosols reflects incoming solar radiation away from Earth and may lead to global cooling post eruption for one to five years, depending on the size and timescales of the eruption.

Google and Vodafone are building a powerful new data platform

The study indicates that the episode of cooling, scientifically known as the Younger Dryas, was caused by numerous coincident Earth-based processes, not an extraterrestrial impact.

“The Younger Dryas, which occurred about 13,000 years ago, disrupted distinct warming at the end of the last ice age,” said co-author Steven Forman, Ph.D., professor…