The 27.5-million-year cycle of geological activity 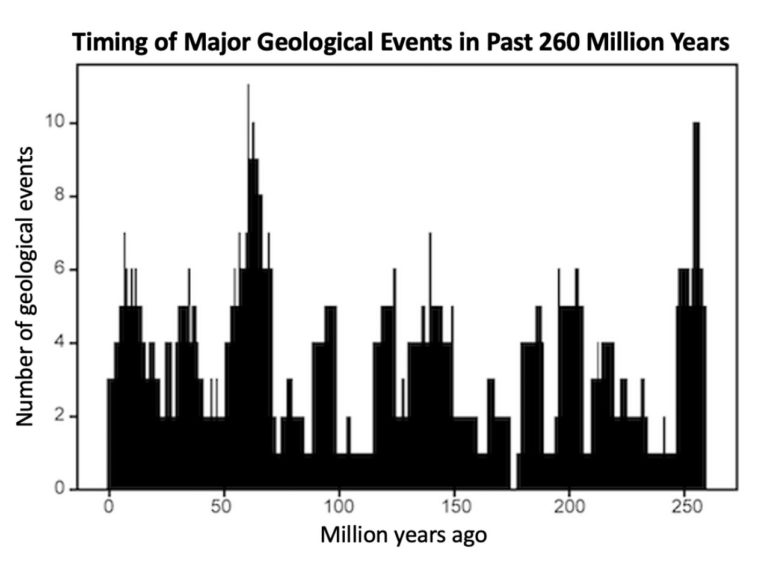 Geologic activity on Earth appears to follow a 27.5-million-year cycle, giving the planet a ‘pulse,’ according to a new study published in the journal Geoscience Frontiers.

“Many geologists believe that geological events are random over time. But our study provides statistical evidence for a common cycle, suggesting that these geologic events are correlated and not random,” said Michael Rampino, a geologist and professor in New York University’s Department of Biology, as well as the study’s lead author.

Over the past five decades, researchers have proposed cycles of major geological events—including volcanic activity and mass extinctions on land and sea—ranging from roughly 26 to 36 million years. But early work on these correlations in the geological record was hampered by limitations in the age-dating of geologic events, which prevented scientists from conducting quantitative investigations.

However, there have been significant improvements in radio-isotopic dating techniques and changes in the geologic timescale, leading to new data on the timing of past events. Using the latest age-dating data available, Rampino and his colleagues compiled updated records of major geological events over the last 260 million years and conducted new analyses.

The team analyzed the ages of 89 well-dated major geological events of the last 260 million years. These events include marine and land extinctions, major volcanic outpourings of lava called flood-basalt eruptions, events when oceans were depleted of oxygen, sea-level fluctuations, and changes or reorganization in the Earth’s tectonic plates.

They found that these global geologic events are generally clustered at 10 different timepoints over the 260 million years, grouped in peaks or pulses of roughly 27.5 million years apart. The most recent cluster of geological events was approximately 7 million years ago, suggesting that the next pulse of major geological activity is more than 20 million years in the future.

The researchers posit that these pulses may be a function of cycles of activity in the Earth’s interior—geophysical processes related to the dynamics of plate tectonics and climate. However, similar cycles in the Earth’s orbit in space might also be pacing these events.

“Whatever the origins of these cyclical episodes, our findings support the case for a largely periodic, coordinated, and intermittently catastrophic geologic record, which is a departure from the views held by many geologists,” explained Rampino.