The most distant radio-loud quasar discovered 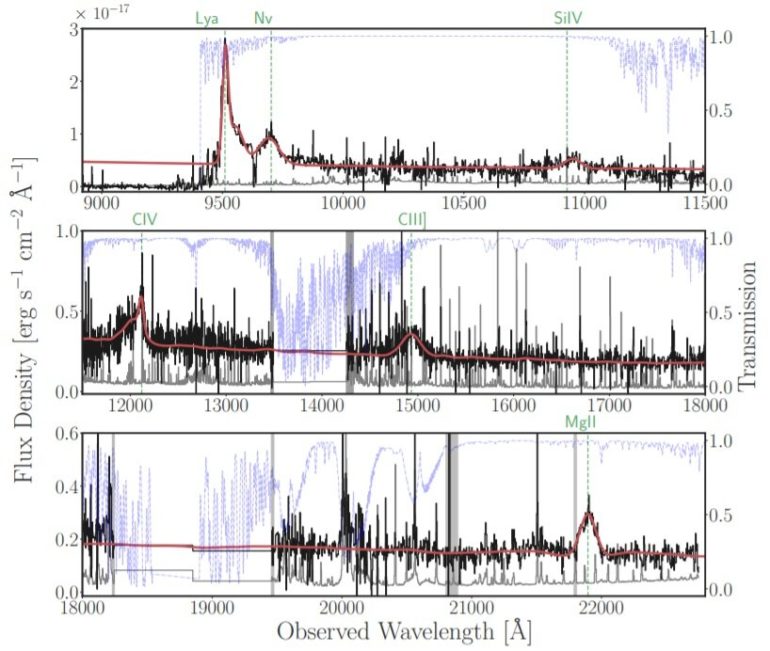 In a recent study, an international team of astronomers presents the discovery of PSO J172.3556+18.7734—a highly accreting radio-loud quasar at a redshift of approximately 6.82. This is the most distant radio-loud quasar known to date. The finding is detailed in a paper published March 4 on arXiv.org.

Astronomers are especially interested in finding new high-redshift quasars (at redshift higher than 5.0) as they are the most luminous and most distant compact objects in the observable universe. Spectra of such QSOs can be used to estimate the mass of supermassive black holes that constrain the evolution and formation models of quasars. Therefore, high-redshift quasars could serve as a powerful tool to probe the early universe.

Now, a group of astronomers led by Eduardo Bañados of the Max Planck Institute for Astronomy in Heidelberg, Germany, reports the finding of another high-redshift quasar—PSO J172.3556+18.7734 (or P172+18 for short).

“We conﬁrmed P172+18 as a z ∼ 6.8 quasar on January 12, 2019 with a 450 s spectrum using the Foldedport InfraRed Echellete (FIRE) spectrograph in prism mode at the Magellan Baade telescope at Las Campanas Observatory,” the researchers explained.

According to the paper, P172+18 has a black hole mass of about 290 million solar masses and an Eddington ratio of around 2.2. By comparing P172+18 to similar objects, the researchers found that the newly detected source is among the fastest accreting quasars at both low and high redshift.

P172+18 was found to have a large ionized intergalactic medium around what suggests that the object’s lifetime exceeds the average lifetime high-redshift quasars with redshifts above 6.0. Moreover, the study found that the radio spectrum of P172+18, between 1.4 and 3.0 GHz is steep, and that this quasar has a radio-loudness parameter at a level of about 91.

Summing up the results, the scientists noted that P172+18 is an interesting target for further observations.

“P172+18, in particular, is an ideal target to investigate the existence of extended X-ray emission arising from the interaction between relativistic particles in radio jets and a hot cosmic microwave background (CMB). This eﬀect is expected to be particularly strong at the highest redshifts because the CMB energy density scales as (1 + z)4 and as a result its eﬀective magnetic ﬁeld can be stronger than the one in radio-lobes,” the authors of the paper concluded.

How words acquire their meaning