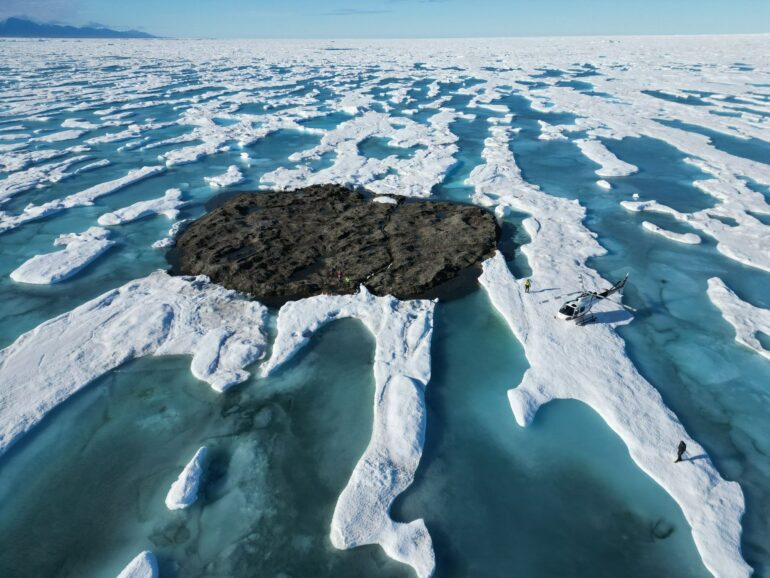 In 2021, an expedition off the icy northern Greenland coast spotted what appeared to be a previously uncharted island. It was small and gravelly, and it was declared a contender for the title of the most northerly known land mass in the world. The discoverers named it Qeqertaq Avannarleq – Greenlandic for “the northern most island.”

But there was a mystery afoot in the region. Just north of Cape Morris Jesup, several other small islands had been discovered over the decades, and then disappeared.

Some scientists theorized that these were rocky banks that had been pushed up by sea ice.

But when a team of Swiss and Danish surveyors traveled north to investigate this “ghost islands” phenomenon, they discovered something else entirely. They announced their findings in September 2022: These elusive islands are actually large icebergs grounded at the sea bottom. They likely came from a nearby glacier, where other newly calved icebergs, covered with gravel from landslides, were ready to float off.

This was not the first such disappearing act in the high Arctic, or the first need to erase land from the map. Nearly a century ago, an innovative airborne expedition redrew the maps of large swaths of the Barents Sea.

Hearst proposed having the Graf Zeppelin, then the world’s largest airship, fly to the North Pole for a meeting with a submarine that would travel under the ice. This ran into practical difficulties and Hearst abandoned the plan, but the notion of using the Graf Zeppelin to conduct geographic and scientific investigations of the high Arctic was taken up by an international polar science committee.

The airborne expedition they devised would employ pioneering technologies and make important geographical, meteorological and magnetic discoveries in the Arctic – including remapping much of the Barents Sea.

The expedition was known as the Polarfahrt – “polar voyage” in German. Despite the international tensions at the time, the zeppelin carried a team of German, Soviet and U.S. scientists and explorers.

Among them were Lincoln Ellsworth, a wealthy American and experienced Arctic explorer who would write the first scholarly account of the Polarfahrt and its geographical discoveries. Two important Soviet scientists also participated: the brilliant meteorologist Pavel Molchanov and the expedition’s chief scientist, Rudolf Samoylovich, who performed magnetic measurements. In charge of the meteorological operations was Ludwig Weickmann, director of the Geophysical Institute of the University of Leipzig.

The expedition’s chronicler was Arthur Koestler, a young journalist who would later become famous for his anti-communist novel “Darkness at Noon,” depicting…