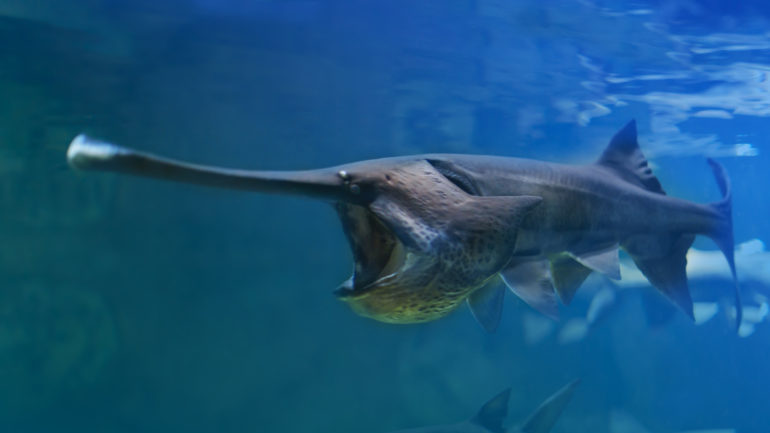 One of the largest freshwater fish in the world may be extinct.

In a new paper, scientists led by Hui Zhang of the Chinese Academy of Fishery Sciences in Wuhan, China, argued that the Chinese paddlefish (Psephurus gladius) is no more, probably having gone extinct sometime between 2005 and 2010. The fish was once common in the Yangtze River in China, the researchers wrote, but overfishing and habitat fragmentation sealed the species’ doom. And there is no hope for bringing it back.

“As no individuals exist in captivity and no living tissues are conserved for potential resurrection, the fish should be considered extinct according to the IUCN Red List criteria,” Zhang and his colleagues wrote in a paper published in the March 2020 issue of the journal Science of the Total Environment, referring to the International Union for Conservation of Nature’s list of threatened and endangered species.

The Chinese paddlefish was an impressive creature, with a large, protruding snout. This nose gave the fish one of its nicknames, xiang yu, or “elephant fish” in Mandarin. The paddlefish could grow as long as 23 feet (7 meters), putting it among sturgeon and alligator gar as the largest freshwater fish in the world. Paddlefish were caught regularly in the Yangtze River as late as the 1970s, according to Zhang and his colleagues. In 1981, a major dam, the Gezhouba Dam, was built in the river and split the Chinese paddlefish population in two.

The dam also prevented fish trapped below it from swimming upstream to tributaries where they could spawn. The species was listed as one of China’s most threatened animals in 1989, but the population continued to decline despite that listing….