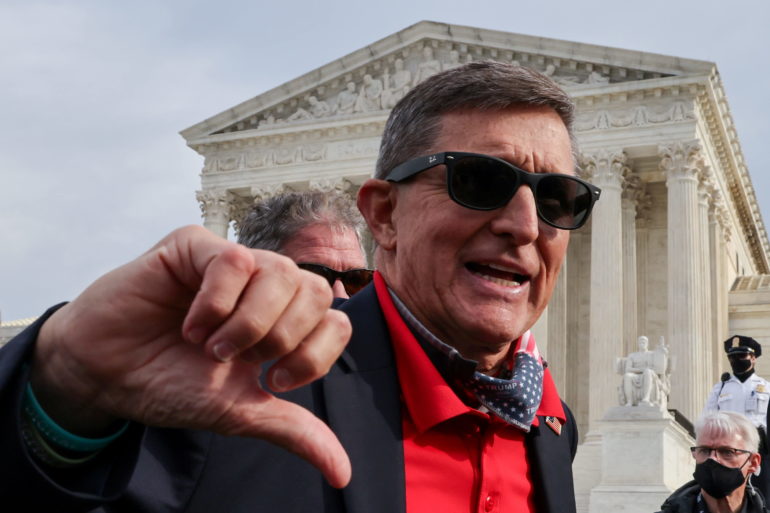 Twitter on Friday announced that it would permanently suspend accounts dedicated to sharing content related to the far-right QAnon conspiracy theory.

As part of this purge, the company suspended the accounts of Michael Flynn and Sidney Powell, supporters of President Donald Trump.

“The accounts have been suspended in line with our policy on Coordinated Harmful Activity,” the company said in a statement to NBC News. “We’ve been clear that we will take strong enforcement action on behavior that has the potential to lead to offline harm, and given the renewed potential for violence surrounding this type of behavior in the coming days, we will permanently suspend accounts that are solely dedicated to sharing QAnon content.”

Flynn, a retired Army lieutenant general and former Trump national security advisor, was pardoned by Trump in November. He had pleaded guilty to lying to FBI agents about his conversations with Russia’s ambassador to the U.S. before Trump was inaugurated four years ago this month. Powell, an attorney, assisted Trump’s lawyer Rudy Giuliani in opposing the results of the presidential election. She made a series of claims about purported ballot fraud, none of which have been accepted by any court as legitimate.

Both Flynn and Powell are active in the QAnon community. Twitter also suspended the account of Ron Watkins, who is the administrator of the website 8kun, formerly known as 8chan.

The suspensions come in the wake of the insurgency at the U.S. Capitol on Wednesday.

Twitter’s Coordinated Harmful Activity policy does not allow groups engaged in activity that results in harm on Twitter or in the real world.

British coral predicted to be resilient to climate change

Twitter had previously taken action against thousands of QAnon-related accounts in July 2020. Although some accounts involved in the QAnon movement can be tough to find, Flynn was a prominent actor in the political sphere, and he took an oath to QAnon in July in a video available publicly.