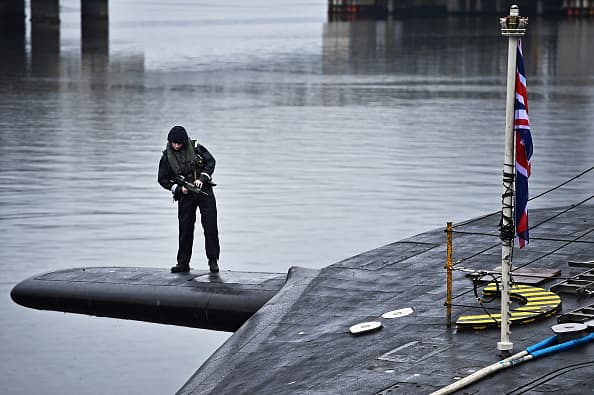 LONDON — The U.K. has changed its defense policy which may enable it to use nuclear weapons in response to “emerging technologies.”

The country’s 111-page Integrated Defense Review, published Tuesday, included a subtle line on when the U.K. “reserves the right” to use nuclear weapons.

It says the U.K. could use nuclear weapons if other countries use “weapons of mass destruction” against it. Such weapons include “emerging technologies that could have a comparable impact” to chemical, biological weapons or other nuclear weapons.

Some British newspapers report that “emerging technologies” include cyberattacks, citing defense insiders, but the report doesn’t explicitly say that. The U.K. government did not immediately respond to a CNBC request for comment.

Tom Plant, a director at the Royal United Services Institute think tank, told CNBC: “I would not interpret it to include cyber-attacks in isolation, no.”

He added that the “understanding of what constitutes emerging tech in government is not evenly distributed — cyber is definitely not ’emerging,’ it’s pretty substantially emerged.”

Either way, Plant believes that the change in language is significant.

“I think it is a marker that there is the potential in the future for combinations of technologies and behaviors to come together that create emergent risks – which perhaps would not arise through the developments of any one technology in isolation – that are incredibly hard to predict and that there is at least the possibility that one or more of these as-yet-unknown emergent challenges might rival WMD in the threat they pose,” he said.

The Integrated Defense Review confirmed that the U.K. is allowing a self-imposed cap on its nuclear weapon stockpile to rise to 260, abandoning the previous cap of 225 warheads as well as the current reduction target of 180 by the mid-2020s.

“This reverses the U.K.’s course of consistent post-Cold War nuclear reductions and runs counter to previous assurances that the program to replace the U.K.’s existing nuclear deterrent would not add to the number of nuclear warheads in service,” Plant wrote in a blog post.

He added that the changes are presented as a reaction to a changed international security environment.

Among Us, Counter-Strike and Cyberpunk 2077 top Steam’s list of top-played games in 2020

“The government paints a picture of a world with growing international competition and increasing threats from Russia, China, North Korea and Iran,” said Plant. “In its judgment, U.K. adversaries are increasing the variety and quantities of their nuclear capabilities, and see nuclear weapons as a means of coercion, deterrence and even warfighting.”

While the U.K. appears to be broadening the scenarios where it could feasibly use nuclear weapons, U.S. President Joe Biden said in his election campaign that the “sole purpose” of nuclear weapons should be to deter or retaliate against another nuclear attack.

The Integrated Defense Review also outlined a new “tilt” toward the Indo-Pacific region.

“By 2030, we will be deeply engaged in the Indo-Pacific as the European partner with the broadest, most integrated presence in support of mutually-beneficial trade, shared security and values,” the document reads.

It says the U.K. will the push into the Indo-Pacific region partly in response to “geopolitical and geoeconomic shifts” including China’s global “power and assertiveness,” as well as the growing importance of the region to “global prosperity and security.”