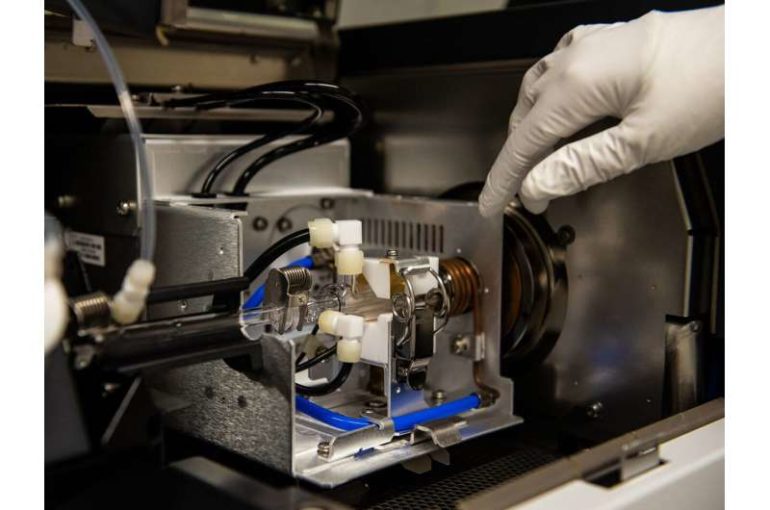 Unless radon gas is discovered in a home inspection, most people remain blissfully unaware that rocks like granite, metal ores, and some soils contain naturally occurring sources of radiation. In most cases, low levels of radiation are not a health concern. But some scientists and engineers are concerned about even trace levels of radiation, which can wreak havoc on sensitive equipment. The semiconductor industry, for instance, spends billions each year to source and “scrub” ultra-trace levels of radioactive materials from microchips, transistors and sensitive sensors.

Now chemists at the U.S. Department of Energy’s Pacific Northwest National Laboratory have developed a simple and reliable method that holds promise for transforming how ultra-trace elements are separated and detected. Low levels of troublesome naturally occurring radioactive elements like uranium and thorium atoms are often tucked among valuable metals like gold and copper. It has been extraordinarily difficult, impractical, or even impossible, in some cases, to tease out how much is found in samples of ore mined across the globe.

Yet sourcing materials with very low levels of natural radiation is essential for certain types of sensitive instruments and detectors, like those searching for evidence of currently undetected particles that many physicists believe actually comprise most of the universe.

“We are really pushing the envelope on detection,” said chemist Khadouja Harouaka. “We want to measure very low levels of thorium and uranium in components that go into some of the most sensitive detectors in the world. It is particularly difficult to measure low levels of thorium and uranium in precious metals like the gold that goes into the electrical components of these detectors. With this new technique, we can overcome that challenge and achieve detection limits as low as 10 parts per trillion in gold.”

That’s like trying to find one four-leaf clover in about 100 thousand acres of clover―an area larger than New Orleans.

The scientists locate their extraordinarily rare “four-leaf clover” atoms from the huge field of ordinary atoms by sending their samples through a series of isolation chambers. These chambers first filter and then collide the rare atoms with simple oxygen, creating a “tagged” molecule of a unique molecular weight that can then be separated by its size and charge.

The effect is like finding a way to tie a helium balloon to each target thorium or uranium atom so that it floats above the sea of gold sample and can be counted. In this case, the sophisticated counter is a mass spectrometer. The research is detailed in a recent issue of the Journal of Analytical Atomic Spectroscopy.

The central innovation is the collision cell chamber, where charged atoms of thorium and uranium react with oxygen, increasing their molecular weight and allowing them to separate from other overlapping signals that can disguise their presence.

“I had an aha moment,” said Greg Eiden, the original PNNL inventor of the patented collision cell, which is used to perform these reactions, thereby reducing unwanted interference in the instrument readout by a factor of a million. “It was this miracle chemistry that gets rid of the bad stuff you don’t want in your sample so you can see what you want to see.”

In the current study, Harouaka and her mentor Isaac Arnquist leveraged Eiden’s work to tease out the vanishingly small number of radioactive atoms that can nonetheless ruin sensitive electronic detection equipment.

Among other uses, the innovation may allow chemists, led by senior chemist Eric Hoppe and his team at PNNL, to further hone the chemistry that produces the world’s purest electroformed copper. The copper forms a key component of sensitive physics detectors, including those used for international nuclear treaty verification.

Stanford physicist Giorgio Gratta helps lead a global quest to capture evidence for the fundamental building blocks of the universe. The nEXO experiment, now in the planning stages, is pushing the detection boundaries for evidence of these elusive particles, called Majorana Fermions. The signals they seek come from exceedingly rare events. To detect such an event, the experiments require exquisitely sensitive detectors that are free of stray radiation pings introduced through the materials that make up the detector. That includes the metals in the electronics required to record the exceedingly rare events that trigger detection.

“PNNL is a global leader in ultra-trace radiation detection,” said Gratta. “Their unique mix of innovation and application provide an important contribution that enables sensitive experiments like nEXO.”

Physicist Steve Elliott of Los Alamos National Laboratory emphasized the lengths to which researchers must go to ensure a scrupulously clean environment for rare particle detection.

“In experimental programs where even human fingerprints are too radioactive and must be avoided, techniques to measure ultra-low radioactive impurity levels are critical,” he said, adding that this method could provide an important way to source materials for another of the next generation of rare neutrino event detectors, called LEGEND, being planned for deployment in an underground location in Europe.

In Apps and WebStartups
on 1 October 20201 min read

Semiconductors, the basic building blocks of modern electronics, including integrated circuits, microchips, transistors, sensors and quantum computers are also sensitive to the presence of stray radiation. And the innovation cycle demands each generation pack more and more into ever tinier microchips.

“As the architecture gets smaller and smaller, radiation contamination is an ever-bigger issue that manufacturers have been working around by changing the architecture inside the chips,” said Hoppe. “But there’s only so far you can go with that, and you really start to become limited by the purity of some of those materials. The industry has set targets for itself that right now it can’t achieve, so having a measurement technique like this could make some of those targets achievable.”

More broadly, Eiden added, “in the big world of the periodic table there’s probably applications for any element that you care about. And what Eric, Khadouja and Isaac are going after here is analyzing any trace impurity in any ultra-pure material.”