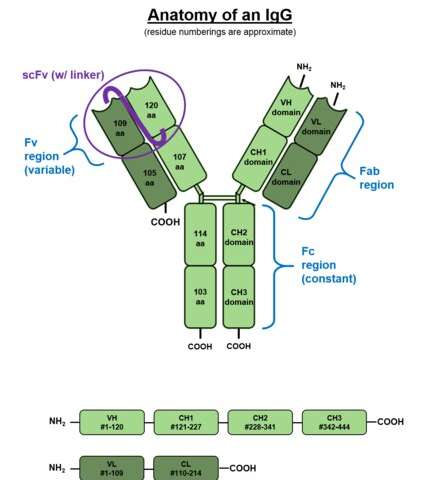 We recently discussed several sources of newly uncovered variation in immune genes that control susceptibility to Sars. For example, modern humans with throwback versions of the neanderthal gene DPP4, or the spike protein cleaving protease TMPRSS2 appear to be at high risk for severe Covid. Other variants, like a highly-expressed TMEM1B gene common in East Asians, or in genes of the heparin sulfate synthesis pathway, help explain the disproportionate severity of COVID-19 in some populations

Two papers, one recently published in Nature Immunology, and the other in Science, now extend the emerging gene list to include variations in the structure of the antibodies that are elicited by virus or vaccine. These variations include a particular kind of posttranslational modification of the anti-RBD (receptor binding domain) of the abundant IgG1 subclass known as afucosylation. What this essentially means is that for one reason or another, the afucosylated antibody is missing the addition of a fucose sugar molecule at a key structural location.

To better visualize the effect of this situation consider the above picture of the standard issue IgG antibody molecule. The variable portion, the arms of the Y shaped molecule, is known as the Fab region and it contains the epitopes that interact with the virus spike protein. The singular base region contains the constant Fc fragment, and incidentally, the glycosylated adornment hanging off of position N297 that potentially contains the fucose. In an almost fractal-like idiosyncrasy, this glycoform piece of kit also has a similar biantennary structure to the parent antibody, only on a much smaller scale, and with various sugars instead of amino acids. The fucose itself hangs off the stem portion of the aggregate glycoform, much as these glycans in turn hang on the antibody.

For anyone familiar with a related type of posttranslational modification known as ubiquitination, the N-glycan linkages form a kind of a code, much like the so-called ubiquitin code. Whereas the ubiquitin code consists of linear and branching subunits of variously phosphorylated or acetylated ubuitins, SUMOs, or NEDDs, the N-glycan code is composed of a heptasaccharide core which can be further extended with core fucose, terminal galactose (Gal), terminal sialic acid (Sia), and bisecting GlcNAc through selective enzymatic glycosylation reactions.

What the authors of these new papers found is that patients with severe forms of Sars-CoV-2 had increased likelihood of IgG1 antibodies with afucosylated Fc glycans, particularly in males. The net result of afucosylation proved to be enhanced interaction and binding with the immune activating Fcγ receptor, FcγRIIIA. This subsequently increases production of cytokines like interleukin-6 and TNF by monocytes. It should be noted that the canonical Fc receptors for human IgG include both activating (FcγRI, FcγRIIA, FcγRIIC, FcγRIIIA, and FcγRIIIB) and inhibitory (FcγRIIB) receptors. Most immune effector cells coexpress both activating and inhibiting FcγRs and therefore the net outcome of IgG interactions can often be predicted as the ratio of the binding affinities of a specific activating to inhibiting IgG receptors.

The way the authors figured this kind of stuff out was to first isolate the relevant IgG from a patient’s serum using protein purification and tryptic digestion. Then nanoscale liquid chromatography coupled to tandem mass spectrometry is generally used to characterize the sites of potential glycosylation. But what the authors really wanted to get at was a more quantitative description of how much receptor binding is affected by afucosylation. To do this, various tried-and-true biophysical techniques including Surface Plasmon Resonance (SPR), Isothermal Titration Calorimetry (ITC), Microscale Thermophoresis (MST), and Biolayer Interferometry (BLI) are now available.

The authors of the Nature paper choose to use Biolayer Interferometry, which yielded graphs for binding (in nm units) as a function of time from which they could derive kinetic constants. BLI is an optical, label-free technique that analyzes the interference pattern of white light reflected from two surfaces. One is a layer of immobilized protein on the biosensor tip while the other is an internal reference. When a ligand immobilized on the biosensor tip surface binds to an analyte in solution there is a shift in the interference pattern that can be measured in real-time.

Afucosylated IgG was found to have a 20–40-fold increase in affinity to FcγRIIIa. This helps explain observed shifts in the front-line lung scavengers expressing FcγRIIIA, namely the alveolar macrophages, into an activated state of antibody-dependent cellular phagocytosis. While lowered Fc fucosylation is seen in the anti-Spike responses of the ARDS patients, other research has found that high levels of fucosylation are found in several kinds of cancer. In attempting to generate high-titer convalescent immunoglobulin treatments, it is likely important that plasma enriched in fucosylated anti-SARS-CoV-2 antibodies should be used. Although afucosylated IgG formed against viruses generally mediate stronger FcγRIIIa responses, they will often amplify cytokine storm and immune pathology.

While variants in the many genes that help build glycan chains, like for example the fucosyltransferase FUT2, might be expected to play a role in patient responses, perhaps an ever more pressing concern is differences in the antibody response to vaccines. In a brief spate of good news, the actual sequence of the new Pfizer mRNA vaccine was generously released unto the masses. The quickest to respond and attempt to decode this revelation was a guy named Bert Hubert, who quickly broke it down for us.

The main difference in the vaccine code is that uracil has been replaced by 1-methyl-3′-pseudouridylyl, which is labelled as Ψ. Although Ψ does not arouse the ire of our immune systems, it is still accepted as a normal uracil by the translation, transcription, and replication machinery of the cell. The other curious features are the substitutions of two prolines to stabilize the spike structure, and the deployment of special 5′ and 3′ untranslated regions before and after the main spike sequence. Bert has promised to release a second deep dive into the sequence in a few days, which is no doubt anxiously awaited by many.