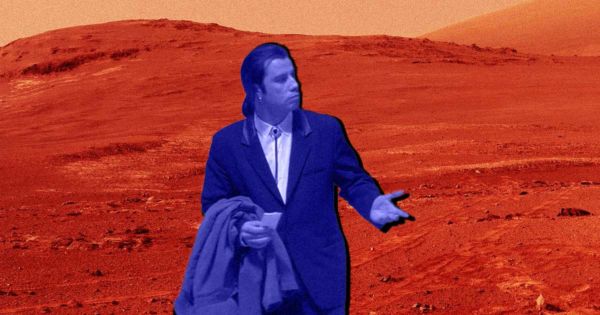 Entomologist William Romoser from Ohio University claimed this week to have spotted evidence of insect-like creatures living on the surface of Mars, pointing at blurry photographs.

“There has been and still is life on Mars,” Romoser said in a press release about his presentation.

But after broad backlash, the press release has since been disappeared from Ohio University’s site.

And on EurekaAlert, the release has been replaced with a message that says it has been “removed at the request of the submitter.”

A PDF poster of Romoser’s research including images is still available through ResearchGate and copies of the release remain elsewhere on the web.

“The faculty member no longer wishes to engage with media regarding this research, so we have opted to remove the story from our website and EurekAlert,” Ohio University spokesperson Jim Sabin told Futurism.

Unsurprisingly, not everybody in the scientific community agreed with Romoser’s fringe claims. Biology professor at Oregon State University David Maddison told Space.com that Romoser is seeing things, pointing out that it may be an example of pareidolia, the phenomenon that leads people to see patterns in random stimuli.

“I, personally, have pareidolia with respect to insects, beetles in particular,” Maddison told Space.com. “I’ve worked on beetles for decades; I have collected many thousands of beetles around the world. Through the years I have built into my brain a pattern-recognition system for picking out beetles.”

In other words, Rosomer is probably wrong, even though he probably thinks he’s right.

“I do not think there are insects on Mars,” Maddison added. “The photographs that are in…