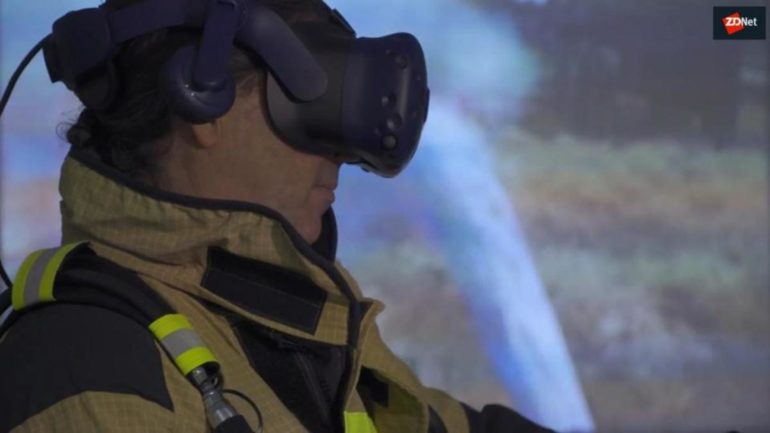 Victorian volunteer firefighters will all soon have access to virtual reality (VR) training that is set to be rolled out across the state.

Developed by Victorian-based company Flaim Systems and Deakin University, the VR training has been designed to simulate dangerous fire scenarios such as house fires, grass fires, and plane fires. It uses a combination of real firefighting equipment such as breathing apparatuses and hose reels, as well as automated sense-perception devices like heat pads to mimic the visual and sensory feelings of being in a real fire.

The training program is made up of two components — Flaim Trainer and Flaim Extinguisher — which will be rolled out to train over 30,000 volunteer firefighters during the year.

“It will give our hard-working volunteer firefighters the ability to extend their skills without exposing them to danger, and allow the CFA to expand its practical training to include more complex scenarios, such as aeroplane fires, without the costs of acting out this scenario in real life,” she said.

“We’re ensuring our emergency services have the tools and resources they need to keep the community safe — this includes significant investment in the training capabilities of our volunteers on the frontline.”

The rollout of the VR training program is being funding through a AU$60 million investment under the Victorian government’s 2017 Fire Services Statement.

The program follows in the footsteps of the Queensland Fire and Emergency Services (QFES), which adopted a VR training program last year to help train new firefighting recruits and SES volunteers.

QFES touted the use of VR would save thousands of dollars. “Each compartment burn can range from AU$5,000 to AU$10,000 to organise, so we’re reducing at least three-quarters straight up,” QFES inspector Bruce Budge told ZDNet at the time.

“It also takes time to get people in the gear for it … [and] following these burns compartments, a cleaning and decontamination process is required, which can add to the time factor.”

Giving access to 17 key geological sites that are home to some of Australia’s oldest Aboriginal artefacts.

How VR is improving treatments for patients and training for doctors

California firefighters use Augmented Reality in battle against record infernos

Contextual mapping is giving first responders real-time information about threats as they unfold, and more AR tech could be on the way