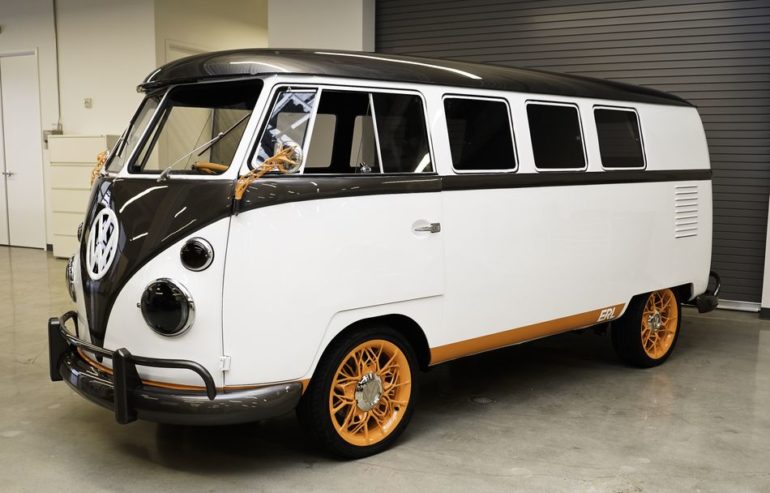 This is not your parents’ VW bus.

It may look like the Type 2 bus from back in the 1960s (yes, it’s sometimes called a hippie bus), but the Type 20 bus unveiled Tuesday at Volkswagen’s Innovation and Engineering Center California (IECC) in the Bay Area is filled with “high-tech surprises,” as executives said during its grand reveal. It’s an all-electric concept car converted from a 1962 Type 2 11-window Microbus.

The IECC also debuted Tuesday at the former Electronics Research Laboratory in the same space, but with an expanded goal to bring digitization, connectivity, autonomy, and other advanced driving systems into research centers for VW and its other brands (like Audi, Porsche, Bentley, Lamborghini, and Bugatti). The Type 20 is named for the roughy 20 years Germany-based VW has been in Silicon Valley.

The electric battery is 10 kWh, which isn’t that powerful compared to a Tesla Model 3 with a 50 kWh battery, but other features keep you busy, like the Porsche-developed software suspension system that raises the car up and down. When the driver approaches, the car rises in greeting. A tablet behind the steering wheel adds a 21st-century vibe to the hippie mobile.

Can you build a gaming PC at Best Buy on Black Friday?

Inside, a ceiling screen creates a digital sunroof and a digital assistant can be summoned from microphones within the vehicle. A real-time facial recognition system recognizes the driver as part of an experiment with biometric control and access to the vehicle. Behind the driver seat, it’s a very communal experience with a wraparound bench.