Watch a 3D Printer Spit Out an Entire Two-Story House 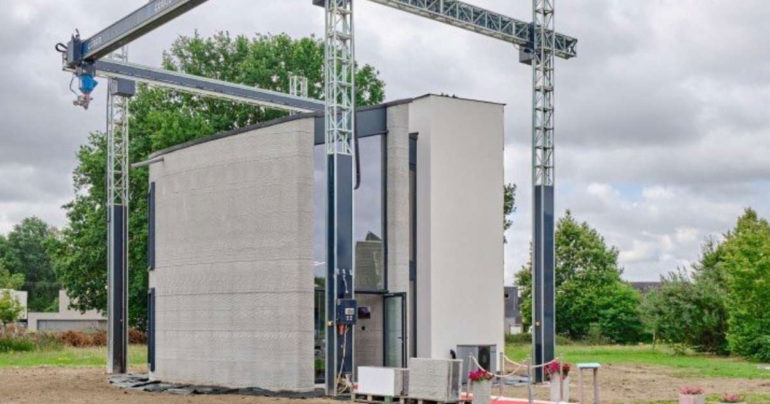 Europe’s largest 3D printer just spat out an entire two-story tall home, an effort by Belgian sustainable construction company Kamp C. According to the company, it’s the biggest house printed in one piece, with a fixed printer, in history.

The 32-by-32 foot printer works in much the same way as its much smaller plastic-printing additive cousins — except that it uses a specially mixed concrete to build layer by layer.

Such a process has key advantages over conventional builds: It’s significantly faster, it’s far more judicious with material usage, and could even cut construction costs as a result.

“The material’s compressive strength is three times greater than that of the conventional quick build brick,” Marijke Aerts, the project manager, told New Atlas. “Besides the fibers in the concrete, the amount of wire-mesh reinforcement used is extremely limited. As a result of the printing technology used, formwork was redundant, saving an estimated sixty percent on material, time, and budget.”

The 980 square feet two-story home is still more of a demo than a livable structure, but it’s technically large enough and even features sustainable amenities, like solar panels and underfloor heating.

How to monitor and limit your kids’ screen time

In Apps and WebCompaniesSmartphones
on 7 August 20215 min read

“Printing this building is mainly a statement,” Emiel Ascione, project manager at Kamp C, told Digital Trends. “It shows the construction industry the accessibility and potential of this technique.”

More on printing houses: These Adorable 3D-Printed Houses Could Solve…