Why is the UK approach to coronavirus so different to other countries? 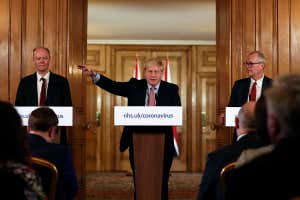 Why is the UK not taking action as drastic and quickly as other countries to tackle the coronavirus? Yesterday, the UK government issued new guidance, telling people with a cough to stay home. But it stopped short of more extreme measures such as banning big gatherings and school closures, which some neighbouring countries have done.

The approach has drawn criticism in some quarters, but Patrick Vallance, the UK’s chief scientific adviser, took to TV and radio studios this morning to explain the strategy’s two main goals. His office told New Scientist today that it is working to make the models behind the reasoning available for public scrutiny.

Vallance said the first goal was: “To reduce the peak of the epidemic, flatten it and broaden it, so you don’t end up with so much intense pressure on healthcare systems at one time.”

The second is to protect the most vulnerable people while the virus spreads through the population. He said the approach would help build up herd immunity as people recover from the disease and become immune, reducing transmission.

This stance appears at odds with the World Health Organization (WHO), which has called on countries to “take urgent and aggressive action”.

“That to me translates into hit hard, early,” says Mark Woolhouse at the University of…