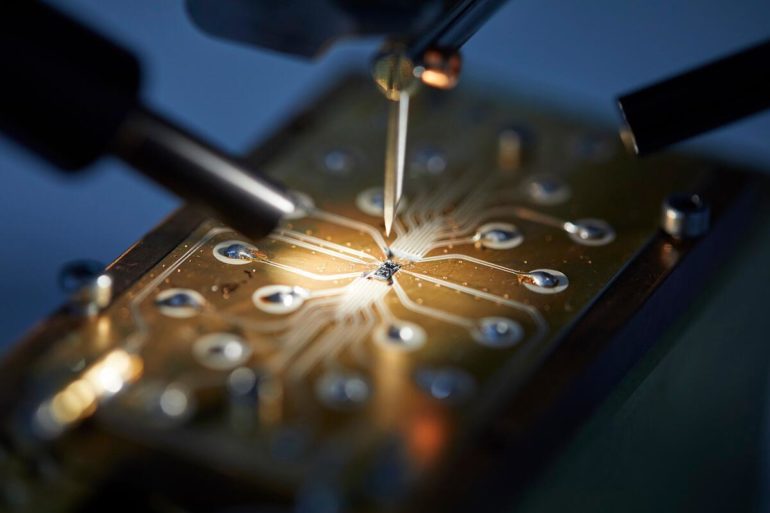 Scientists at the University of New South Wales (UNSW) have devised a new placement of control wiring that they hope will scale up to controlling millions of qubits.

In research published in Science Advances, the team said they wanted control, but without having precious space taken up by wiring that used increasing amounts of electricity and generated heat that needed to be dissipated.

“Up until this point, controlling electron spin qubits relied on us delivering microwave magnetic fields by putting a current through a wire right beside the qubit,” UNSW quantum engineer Dr Jarryd Pla said.

“First off, the magnetic fields drop off really quickly with distance, so we can only control those qubits closest to the wire. That means we would need to add more and more wires as we brought in more and more qubits, which would take up a lot of real estate on the chip.”

With the experiments being completed at temperatures of 50 millikelvins, a touch under -273 Celsius, the heat from the wires could interfere with qubit reliability.

The solution was to get vertical and have the control wiring above the qubits, along with a crystal called a dielectric resonator that takes microwaves shot at it, and shrinks the wavelength of the microwaves.

“First we removed the wire next to the qubits and then came up with a novel way to deliver microwave-frequency magnetic control fields across the entire system. So in principle, we could deliver control fields to up to four million qubits,” Pla said.

“The dielectric resonator shrinks the wavelength down below one millimetre, so we now have a very efficient conversion of microwave power into the magnetic field that controls the spins of all the qubits.

“There are two key innovations here. The first is that we don’t have to put in a lot of power to get a strong driving field for the qubits, which crucially means we don’t generate much heat. The second is that the field is very uniform across the chip, so that millions of qubits all experience the same level of control.”

Testing the system with existing quantum in silicon from UNSW proved successful, and the next steps will be to simplify the design of silicon quantum processors to handles tens of qubits.

“While there are engineering challenges to resolve before processors with a million qubits can be made, we are excited by the fact that we now have a way to control them,” Pla said.