A large-scale examination of the protein composition of dendritic spines 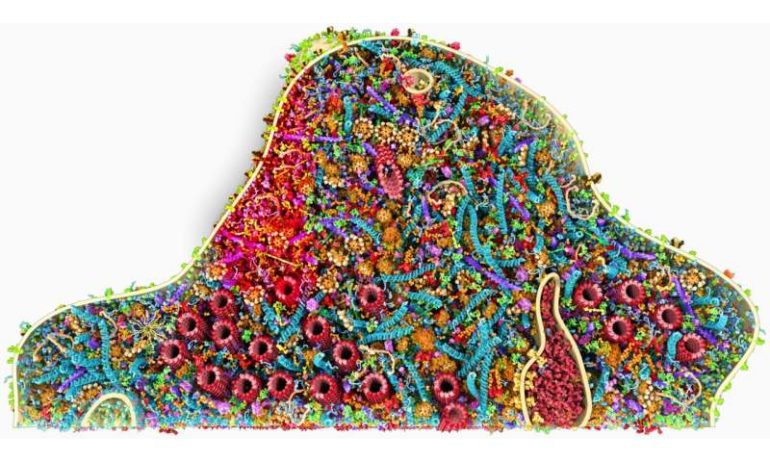 Dendritic spines, small membranous protrusions emerging from a brain cell’s dendrite, help to transmit electrical signals to neurons. These spines can have a variety of different shapes, ranging from so-called “stubby” to “mushroom-like.”

Mushroom spines have been found to be of key importance for the functioning of the human brain in adulthood. Stubby spines, on the other hand, are known to gradually disappear as the brain matures and develops.

Over the past decades, many neuroscientists have investigated the functions and structure of dendritic spines. However, the unique protein composition of different types of spines remains unknown.

Researchers at University Medical Center Göttingen in Germany have recently carried out a study aimed at examining the composition of postsynaptic dendritic spines in the human brain. Their paper, published in Nature Neuroscience, could help to explain previous experimental observations outlining the response patterns of different dendritic spines.

“Most neuroscientists understand that synapses have the function of transmitting information from one neuron to the next,” Silvio Rizzoli, one of the researchers who carried out the study, told Medical Xpress. “The function of synapses is based on many types of proteins that need to work in synchrony. The problem is that nobody knows how many of such proteins are in the synapse and how they work together.”

Rizzoli and his colleagues initially set out to examine the protein composition of pre-synapses (the part synapses emerging from transmitting neurons) and they presented their results in a paper published in Science. In their recent study featured in Nature Neuroscience, on the other hand, they analyzed the protein composition of post-synapses (the part of synapses approaching receiving neurons).

The overall objective of their research was to gain a quantitative understanding of the so-called synaptic machinery, as opposed to the qualitative one obtained by other works. In other words, the researchers wanted to understand how many different types of proteins are in dendritic spines (or post-synapses), rather than merely identifying what they are made of.

“In our paper, we take an integrative approach, using cultured neurons, analyzing the protein copy numbers per neuron by quantitative biochemistry and mass spectrometry, then determining the copy numbers per synapse using conventional epifluorescence imaging, and finally analyzing the protein positions using super-resolution STED microscopy,” Rizzoli explained. “The 3D morphology of the synapses was analyzed using electron microscopy, and, finally, all of these elements were put together by modeling.”

Previous neuroscience studies assumed that the composition and structural organization of small, stubby and transient synapses and large, mushroom-like, permanent synapses would be different. Interestingly, however, the analyses carried out by Rizzoli and his colleagues showed that stubby and mushroom-like synapses have a virtually identical organization, with similar average protein copy numbers and topologies.

A closer analysis of the correlation of each protein to the postsynaptic density mass, suggested that mushroom-like spines had a greater synaptic strength. In other words, stubby dendritic spines appeared to be less likely to adequately respond to dynamic changes in synaptic transmission than mushroom-like spines.

The findings gathered by this team of researchers could have several important implications. For instance, they could partly explain why stubby dendritic spines are transient and gradually disappear as the human brain develops, while mushroom-like spines are permanent and play a key role in the functioning of the adult brain.

“We are now working on a similar protein composition model for a whole cell (neuron),” Rizzoli said.

Citation:
A large-scale examination of the protein composition of dendritic spines (2021, July 9)
retrieved 12 July 2021
from https://medicalxpress.com/news/2021-07-large-scale-protein-composition-dendritic-spines.html