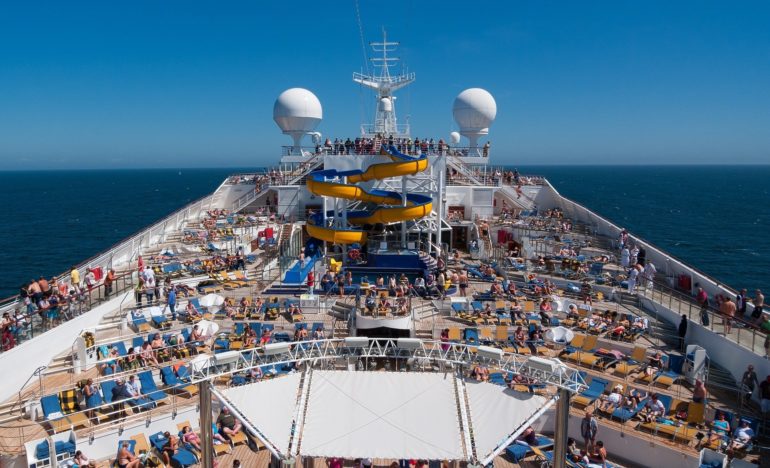 Among the many startling images of the early coronavirus pandemic were the luxury cruise ships that garnered the nickname “floating incubators.”

No situation was more riveting than the ill-fated Diamond Princess, a British-registered ship that primarily cruises throughout Asia. The vessel’s storied—and deadly—quarantine at sea, which lasted nearly a month from February through early March of 2020, is helping environmental scientists shed new light on the dynamics of aerosol viral transmission. New modeling research published in the Proceedings of the National Academy of Sciences, illustrates not only how SARS-CoV-2 likely spread among passengers and crew, but how the Diamond Princess may serve as an object lesson for other built environments and airborne viruses.

Environmental health investigators at Harvard University’s T.H. Chan School of Public Health and their collaborators have demonstrated that airborne transmission accounted for more than 50 percent of the disease spread aboard the cruise ship. Inhalation of virus-laden aerosols by passengers and crew occurred during close contact and at longer range, the scientists found.

Writing in the PNAS, Drs. Parham Azimi, Joseph G. Allen and colleagues underscore that it wasn’t aerosols alone that fueled a SARS-CoV-2 outbreak that affected hundreds aboard the luxury liner. Other routes of transmission contributed to the contagion, including fomite transmission, the spread of infection through contact with contaminated objects.

Their computational assessment of transmission pathways lends new insight into an outbreak in which 712 of the 3711 passengers and crew became infected, and more than a dozen died. Beyond the Harvard team’s assessment of how people aboard the Diamond Princess became infected, the new research tackles key concerns at the core of the ongoing pandemic—about droplets, aerosols as well as close contact and long-range infection.

One of the biggest concerns throughout the pandemic has centered on this question: What constitutes the most common mode of SARS-CoV-2 transmission? The U.S. Centers for Disease Control and Prevention “has updated its position multiple times and currently underscores that SARS-CoV-2 is thought to spread mainly through close contact from person-to-person” (which the CDC defines as within 1.8 meters, or approximately six feet), Azimi and his colleagues wrote.

The agency, meanwhile, has been lukewarm about fomite transmission and the inhalation of respiratory droplets. Those methods of disease conveyance are likely not the primary ways the virus spreads, according to the CDC.

“It is important to note that there has been an argument about the size of these infectious aerosols and the range that they transmit,” Azimi told Medical Xpress. “While the World Health Organization generally considers these particles to be less than 5 micrometers in diameter, aerosol scientists believe particles up to 10 micrometers in diameter or even larger can easily transmit within an indoor environment by small airflows mixing [with] the indoor air, interzonal or mechanisms such as an HVAC system’s [air] recirculation,” Azimi said, referring to a heating, ventilation and air conditioning system.

To evaluate the importance of multiple transmission routes of SARS-CoV-2 aboard the cruise ship, the team developed a modeling framework that utilized reams of detailed information from the Diamond Princess outbreak. The Harvard environmental health scientists modeled 21,600 scenarios “to generate a matrix of solutions across a full range of assumptions for eight unknown or uncertain epidemic and mechanistic transmission factors,” they wrote in PNAS.

The new Harvard findings underscore the importance of instituting measures to control small aerosol inhalation along with measures to control large droplet and fomite transmission. The authors emphasize that similar methods of assessment can be applied to the study of disease transmission risk in other built environments and for other airborne infectious diseases.

The Diamond Princess, as it turns out, was no stranger to disease outbreaks. It had been the site of a major norovirus epidemic in 2016. But gastroenteritis and a pandemic respiratory virus are completely different types of infection requiring different disease-control considerations. When SARS-CoV-2 erupted, the rapid spread of infection to hundreds of passengers became a seafaring nightmare. No port would allow the vessel to dock for weeks. Passengers hailed from around the globe: Australia, Britain, Canada, India, Malaysia, the United States, and several other countries. It was reported that the outbreak probably was ignited by a lone 80-year-old passenger from Hong Kong who had disembarked in January but had sowed the seeds of contagion while still on board.

The new research by the Harvard team adds new context to a CDC investigation that was conducted aboard the Diamond Princess a few weeks after it docked and passengers had disembarked. CDC scientists clad in hazmat suits boarded the star-crossed vessel and took biological samples as part of their outbreak assessment. There was extensive evidence of SARS-CoV-2 RNA throughout passenger cabins, in hallways and other areas of the massive cruise liner. The inescapable presence of coronavirus RNA suggested explosive spread throughout the ship.

As part of their modeling research, Azimi and his colleagues relied on the Markov Chain Model, which uses “a discrete-time, discrete-space Markov chain” to estimate the number of SARS-CoV-2 copies present in numerous physical states, as well as the probability of transmission of SARS-CoV-2.”

“We chose the Markov Chain model over other existing infection transmission risk models because of its ability to stochastically track all modes of transmission under a wide variety of assumptions and with high computational efficiency. This approach offers advantages over the extensively used Wells-Riley model for quantitative infection risk assessment of respiratory infectious diseases in indoor environments, which does not consider all disease transmission routes,” the scientists wrote in PNAS.

Yet as detailed as their modeling study is—and it is possibly the most extensive and exhaustive of the Diamond Princess outbreak to date—there are still important questions that have yet to be answered. For one, how long do viral particles remain viable aerially?

“That is one of the biological factors that is very uncertain,” Azimi said. “In one of the most widely cited articles about the viability of SARS-CoV-2 [by virologist Neeltje van Doremalen of the National Institute of Allergy and Infectious Diseases] it is estimated that the half-life of SARS-CoV-2 in the air is approximately one hour. This means that it would take about one hour for half of the infectious viruses to lose their viability. After two hours, 75 percent of viruses would lose their viability in indoor air, and so on.”

The modeling research by the Harvard-led team emphasizes that fomite transmission apparently played a role on the ship, albeit much smaller than aerosol spread. However, that finding suggests fomite transmission should not be shunted aside as possible risk factor.

Majority of SARS-CoV-2 transmission due to asymptomatic individuals