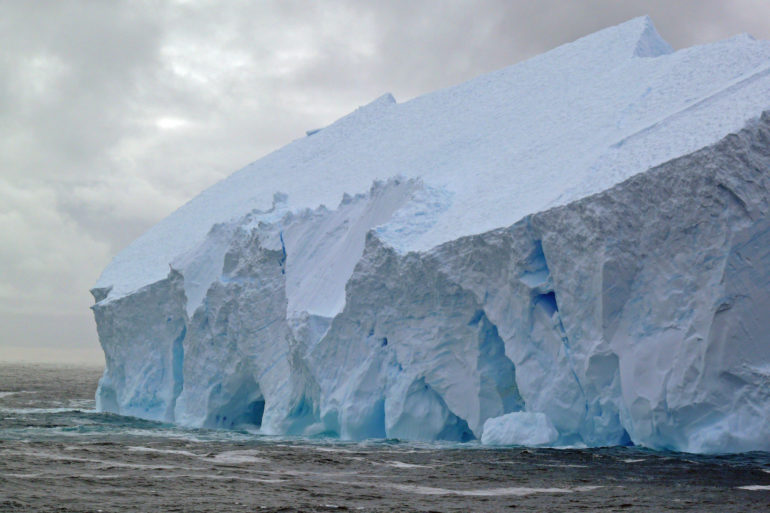 Global sea level rise associated with the possible collapse of the West Antarctic Ice Sheet has been significantly underestimated in previous studies, meaning sea level in a warming world will be greater than anticipated, according to a new study from Harvard researchers.

The report, published in Science Advances, features new calculations for what researchers refer to as a water expulsion mechanism. This occurs when the solid bedrock the West Antarctic Ice Sheet sits on rebounds upward as the ice melts and the total weight of the ice sheet decreases. The bedrock sits below sea level so when it lifts, it pushes water from the surrounding area into the ocean, adding to global sea level rise.

The new predictions show that in the case of a total collapse of the ice sheet, global sea level rise estimates would be amplified by an additional meter within 1,000 years.

“The magnitude of the effect shocked us,” said Linda Pan, a Ph.D. in earth and planetary science in GSAS who co-led the study with fellow graduate student Evelyn Powell. “Previous studies that had considered the mechanism dismissed it as inconsequential.”

“If the West Antarctic Ice Sheet collapsed, the most widely cited estimate of the resulting global mean sea level rise that would result is 3.2 meters,” said Powell. “What we’ve shown is that the water expulsion mechanism will add an additional meter, or 30 percent, to the total.”

But this is not just a story about impact that will be felt in hundreds of years. One of the simulations Pan and Powell performed indicated that by the end of this century global sea level rise caused by melting of the West Antarctic Ice Sheet would increase 20 percent by the water expulsion mechanism.

“Every published projection of sea level rise due to melting of the West Antarctic ice sheet that has been based on climate modeling, whether the projection extends to the end of this century or longer into the future, is going to have to be revised upward because of their work,” said Jerry X. Mitrovica, the Frank B. Baird Jr. Professor of Science in the Department of Earth and Planetary Sciences and a senior author on the paper. “Every single one.”

Pan and Powell, both researchers in Mitrovica’s lab, started this research while working on another sea level change project but switched to this one when they noticed more water expulsion from the West Antarctic ice sheet than they were expecting.

The researchers wanted to investigate how the expulsion mechanism affected sea level change when the low viscosity, or the easy flowing material of the Earth’s mantle beneath West Antarctica, is considered. When they incorporated this low viscosity into their calculations they realized water expulsion occurred much faster than previous models had predicted.

“No matter what scenario we used for the collapse of the West Antarctic Ice Sheet, we always found that this extra one meter of global sea level rise took place,” Pan said.

The researchers hope their calculations show that, in order to accurately estimate global sea level rise associated with melting ice sheets, scientists need to incorporate both the water expulsion effect and the mantle’s low viscosity beneath Antarctica.

“Sea level rise doesn’t stop when the ice stops melting,” Pan said. “The damage we are doing to our coastlines will continue for centuries.”