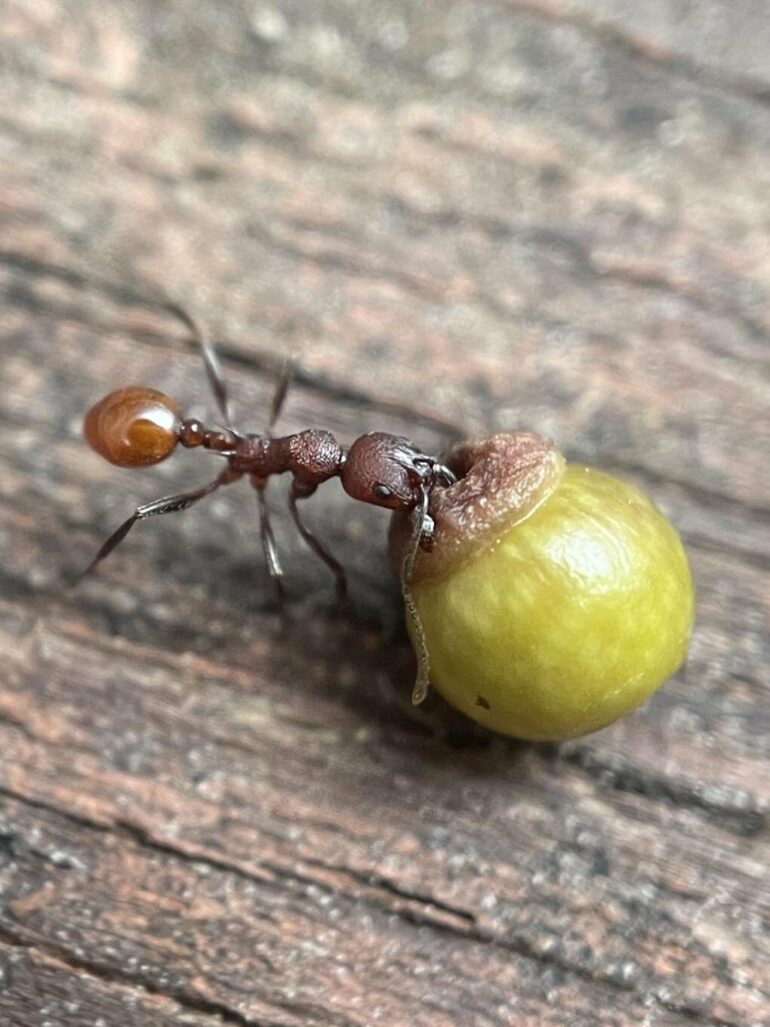 When eight-year-old Hugo Deans discovered a handful of BB-sized objects lying near an ant nest beneath a log in his backyard, he thought they were a type of seed. His father, Andrew Deans, professor of entomology at Penn State, however, knew immediately what they were—oak galls, or plant growths triggered by insects. What he didn’t realize right away was that the galls were part of an elaborate relationship among ants, wasps and oak trees, the discovery of which would turn a century of knowledge about plant-insect interactions on its head.

Looking back, Hugo, now 10, says that he “thought they were seeds, and I felt excited because I didn’t know ants collected seeds. I always thought ants would eat food scraps and stuff around the house. Then I got more excited when [my dad] told me they were galls, because [my dad] was so excited. I was surprised that ants would collect galls because why would they do that?”

According to Andrew Deans, who is also the director of Penn State’s Frost Entomological Museum, many plant-insect interactions are well documented. For example, most “cynipid” wasp species have long been known to induce oak trees to produce protective galls—or growths—around their larvae to ensure the safety of their developing offspring. Additionally, certain plants—including bloodroot (Sanguinaria canadensis), a wildflower native to North America—produce edible appendages, called elaiosomes, on their seeds to attract ants, which then disperse the seeds by carrying them back to their nests. This latter example is referred to as “myrmecochory”—or seed dispersal by ants.

“In myrmecochory, ants get a little bit of nutrition when they eat the elaiosomes, and the plants get their seeds dispersed to an enemy-free space,” Deans explains. “The phenomenon was first documented over 100 years ago and is commonly taught to biology students as an example of a plant-insect interaction.”

The team’s new research—initiated by Hugo’s discovery of galls lying near an ant nest—revealed a much more complex type of myrmecochory, one that combined the wasp-oak gall interaction with the edible appendage-ant interaction.

“First, we observed that, while these galls normally contain a fleshy pale-pink ‘cap,’ the galls near the ant nest did not have these caps, suggesting that maybe they were eaten by the ants,” says Deans. “Ultimately, this led us to discover that gall wasps are manipulating oaks to produce galls, and then taking another step and manipulating ants to retrieve the galls to their nests, where the wasp larvae may be protected from gall predators or receive other benefits. This multi-layered interaction is mind blowing; it’s almost hard to wrap your mind around it.”

The team’s findings published in the journal American Naturalist.

To better understand the interaction, the researchers conducted a series of field and laboratory experiments. First, to determine if, like eliaosomes, the oak gall caps—which the researchers named kapéllos (Greek for “cap”)—were indeed edible and attractive to ants, the team directly observed oak galls in ant colonies in the wild in Western New York and central Pennsylvania. Additionally, they set up video cameras to capture additional animal/gall interactions. In both locations, they saw ants transporting galls to their nests. Within the nests, all the edible caps were removed, while the galls themselves remained intact.

In a second set of experiments to determine if kapéllos functioned similarly to elaiosomes, the researchers investigated ant preference for oak galls vs. bloodroot seeds. They set up seed/gall bait stations and observed that ants removed the same number of seeds and galls, suggesting no difference in ant preference.

Next, the scientists conducted a laboratory experiment to document whether ants collected galls because of their nutritious kapéllos. They set up three petri-dish treatments—containing entire galls, gall bodies with kapéllos removed or kapéllos with gall bodies removed—along with a control dish containing a different type of gall that did not have an edible appendage. They introduced ants to the petri dishes. They found that ant interest did not differ between the control galls and the kapéllo-free treatment galls, both of which lacked edible components. By contrast, ant interest was greater for galls with intact kapéllos and for kapéllos alone than for control galls.

Finally, the team asked, “What’s in kapéllos that make them so attractive to ants?” According to Tooker, the chemistry of elaiosomes is well studied and known to contain nutritious fatty acids. Therefore, the team compared the chemical compositions of kapéllos to elaiosomes and found that kapéllos, too, contained healthful fatty acids.

The last, and according to the researchers, most intriguing, question the team pursued was, “Which came first in evolutionary time? The elaiosome interaction or the gall interaction?”

“Given that myrmecochory was described more than a century ago and has been well-researched and taught in schools, one might assume that the elaiosome interaction came first, but that assumption may be wrong for several reasons,” says Robert J. Warren II, professor of biology, SUNY Buffalo State.

One reason, he explained, is that myrmecochorous plants, like bloodroots, comprise only a very small percentage of all plant species and, therefore, may not contribute enough food resources to drive natural selection in ants. Oak galls, however, are widely abundant. In fact, says Warren, they were once so abundant that they were regularly used to fatten livestock.

“If these galls were so abundant and evolved this tactic of growing this cap thousands of years ago, that could have been a strong driver of natural selection in ants,” says Warren. “It could be that ants were long used to picking up galls with caps, and then when spring wildflowers began to produce seeds that happened to have an edible appendage, ants were already predisposed to picking up things with a fatty acid appendage.”

Deans noted that the team recently received a grant to conduct phylogenetic work to further investigate which of these interactions came first in evolutionary time.

“Understanding how these interactions evolved and how they work helps to untangle just a little bit more of the complexity of life on Earth,” he says.

When asked if he wants to be an entomologist like his dad when he grows up, given that he’s already made his first scientific discovery, Hugo says “not really. I want to be different … unique … when I grow up.”