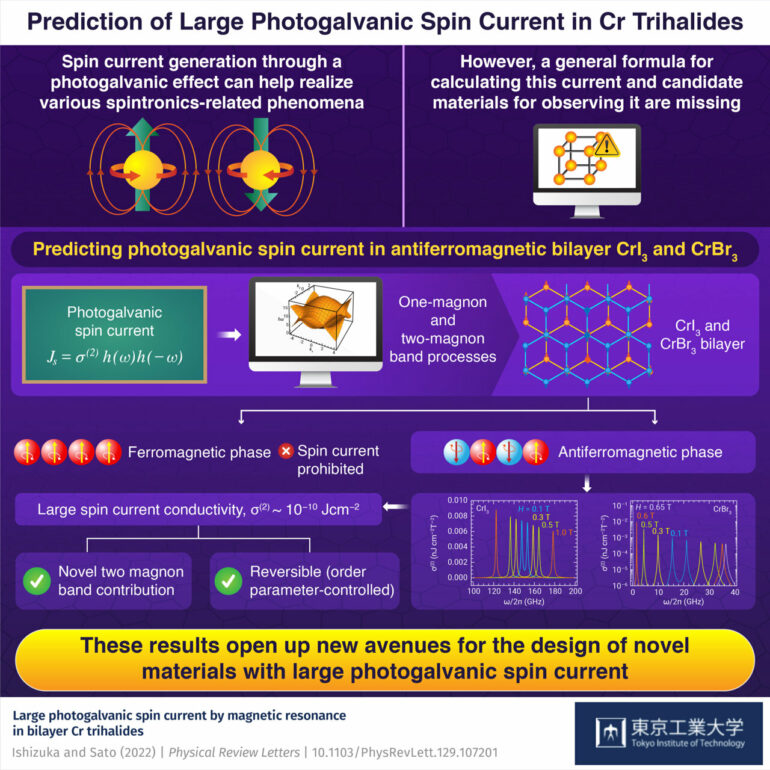 An ingenious approach toward developing low-power, high-speed, and high-density memory devices is based on spintronics, an emerging frontier in technology that harnesses a degree of freedom of electrons known as spin. Put simply, electrons, along with their negative charge, possess a spin whose orientation can be controlled using magnetic fields. This is particularly relevant for magnetic insulators, in which the electrons cannot move around, but the spin remains controllable. In these materials, the magnetic excitations can give rise to a spin current, which forms the basis of spintronics.

Scientists have been looking for efficient methods to generate the spin current. The photogalvanic effect, a phenomenon characterized by the generation of DC current from light illumination, is particularly useful in this regard. Studies have found that a photogalvanic spin current can be generated similarly using the magnetic fields in electromagnetic waves. However, we currently lack candidate materials and a general mathematical formulation for exploring this phenomenon.

Now, Associate Professor Hiroaki Ishizuka from Tokyo Institute of Technology (Tokyo Tech), along with his colleague, has addressed these issues. In their recent study published in Physical Review Letters, they presented a general formula that can be used to calculate the photogalvanic spin current induced by transverse oscillating magnetic excitations. They then used this formula to understand how photogalvanic spin currents arise in bilayer chromium (Cr) trihalide compounds, namely chromium triiodide (CrI3) and chromium tribromide (CrBr3).

“Unlike past studies that considered longitudinal oscillating magnetic fields for generating spin currents, our study focuses on transverse oscillating magnetic fields. Based on this, we found that processes involving one magnon (quantum of spin wave excitations) band as well as two magnon bands contribute to the spin current,” elaborates Dr. Ishizuka.

Using their formula, the duo found that both CrI3 and CrBr3 showed a large photogalvanic spin current for magnetic excitations corresponding to electromagnetic waves at gigahertz and terahertz frequencies. However, the current only appeared when the spins showed antiferromagnetic ordering, meaning successive spins were anti-parallel, as opposed to ferromagnetic ordering (where successive spins are parallel).

Moreover, the spin current direction was governed by the orientation of the antiferromagnetic ordering (whether the spins on the first and second layers were arranged up-down or down-up). Additionally, they pointed out that, unlike previous findings that attributed the spin current to only the two-magnon process, their formula showed that a large response was, in general, possible with the single magnon process.

These results suggest that bilayer CrI3 and CrBr3 are strong candidates for investigating the mechanism associated with photogalvanic spin current generation.

“Our study not only predicts unforeseen contributions to the spin current but also provides a guideline for the design of novel materials driven by the photogalvanic effect of magnetic excitations,” says Dr. Ishizuka.