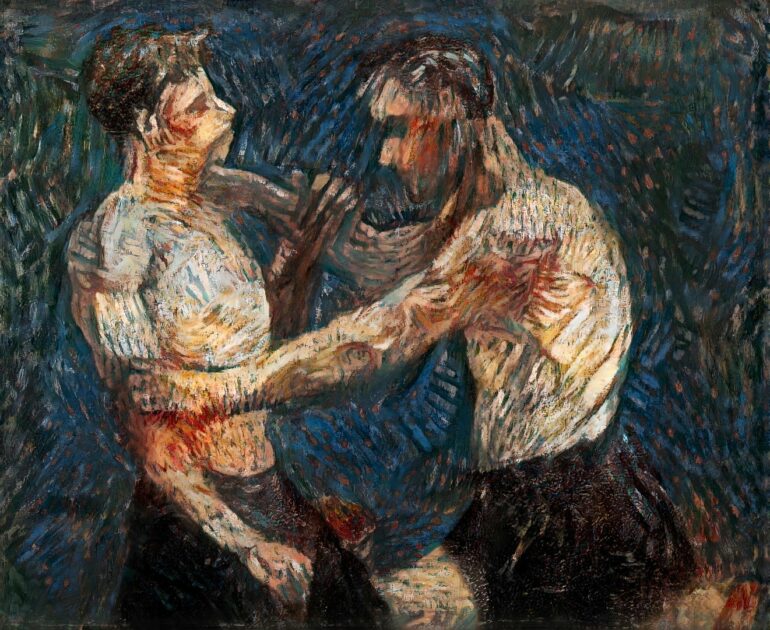 It’s the latest in their “NeoMasters” series of recreations, a project they’ve been working on since 2019 to bring lost works of art to life.

They developed a process to recreate lost works that uses X-ray imaging to see through every layer of paint, AI to extrapolate the artist’s style, and 3D printing to fabricate the final piece.

This newest effort, dubbed “The Two Wrestlers,” depicts two shirtless wrestlers grappling in front of an abstract background. It recreates a painting originally by Van Gogh who covered over the two figures when he reused the canvas for an unrelated painting of flowers.

Bourached, who is researching Machine Learning and Behavioral Neuroscience at UCL, says that “how much it is like the original painting is impossible to tell at this point because the information doesn’t exist. I think it’s very convincing—by far the best guess we can get with current technology.”

The obscured image was first discovered in 2012 when art experts at the University of Antwerp investigated whether the work “Still Life with Meadow Flowers and Roses” was an authentic Van Gogh. The researchers examining the artwork used X-rays to peer through the layers of paint and discovered two ghostly figures that had been painted over.

The covered-over wrestlers displayed brush strokes and pigments that were consistent with Van Gogh, and the subject matter was also a common theme at the Antwerp Art Academy where Van Gogh was studying in 1886, authenticating the work.

“This week I painted a large thing with two nude torsos—two wrestlers… and I really like doing that,” Van Gogh wrote in a letter to his brother Theo in January of 1886.

Bourached and Cann developed a series of algorithms that identified the edges and created an outline of the figures from the X-ray data. They then used a neural network that learned from hundreds of other Van Gogh works to predict the style of colors, details and brushstrokes of the painting. Finally, the team used a 3D printer to construct the final art piece.

Using similar image analysis and fabrication techniques, the team was able to resurrect other images that had been considered lost for many years. In 2021, the team first recreated a painted-over image of a crouching nude woman beneath the painting “The Blind Man’s Meal” by Pablo Picasso.