Chlamydiae expand our view on how intracellular bacteria evolve 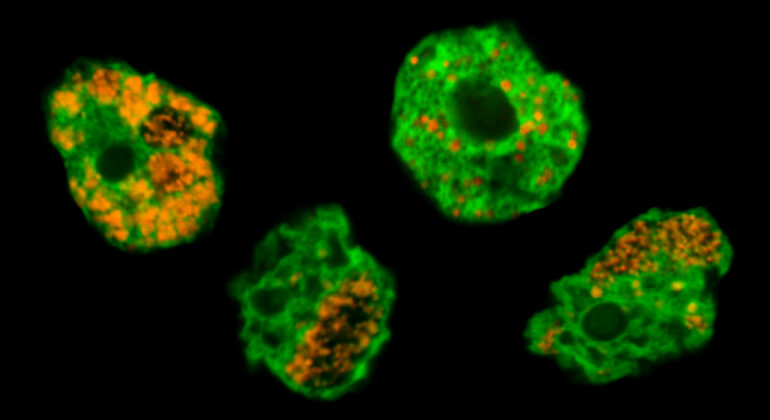 All chlamydiae today live inside the cells of hosts ranging from amoeba to animals. A team of scientists from the University of Vienna and the Wageningen University & Research found that the ancestor of chlamydiae likely already lived inside host cells, but that chlamydiae infecting amoeba evolved later in ways unexpected for intracellular bacteria.

The study, published in Nature Microbiology, is an important step toward understanding the emergence and evolution of endosymbiotic bacteria, including human pathogens.

Chlamydiae are known for the human pathogen Chlamydia trachomatis, but this group of bacteria evolved more than a billion years ago—long before even the first animals. Nevertheless, all chlamydiae found today live inside a broad range of hosts from small amoeba to animal cells. But what has been puzzling scientists since the first chlamydiae genomes were sequenced 20 years ago is that, while chlamydiae infecting animals have small genomes similar to other endosymbionts, those that infect amoeba have larger genome sizes more similar to free-living bacteria. The study of this diverse bacterial group’s evolution, however, has been hampered by the difficulty of growing these microbes in the lab.

The teams led by Matthias Horn (University of Vienna) and Thijs Ettema (Wageningen University & Research) circumvented this problem: “We’ve only recently gained the capability to sequence genomes directly from environmental samples to explore the breadth of chlamydial diversity,” explain the researchers. With this new data in hand, they traced back the evolution of chlamydiae.

Using state-of-the-art computational methods, they reconstructed the genome of the last common ancestor of all known chlamydiae. The researchers found that “this extinct microbe had all the genes needed to be an endosymbiont. Even genes important for chlamydial animal pathogens today were likely already present.” This means that chlamydiae have been infecting host cells for over a billion years of evolutionary history.

However, to their surprise the research team also found that chlamydiae infecting amoeba gained many metabolic genes only later, despite the fact that endosymbionts have fewer opportunities to exchange genes with other bacteria. “Our results show that more gene exchange happened in some chlamydiae than expected for endosymbionts,” the authors explain, “including the gain of key metabolic genes.”

This result challenges how we think about the evolution of endosymbionts. But the researchers also suggest a solution to this conundrum. “It’s not so surprising when you think about the environment these chlamydiae live in: Amoeba often host multiple endosymbionts and feed on free-living bacteria, so there are other microbes around increasing the accessible gene pool. In addition, most chlamydiae move between different hosts, and exposure to changing environments could explain why it might be beneficial for these endosymbionts to keep and even gain additional metabolic genes.”

The scientists are curious to see whether this mode of endosymbiont evolution is more widespread. In any case, this study is an important step for understanding the emergence and evolution of endosymbiotic bacteria, including human pathogens.