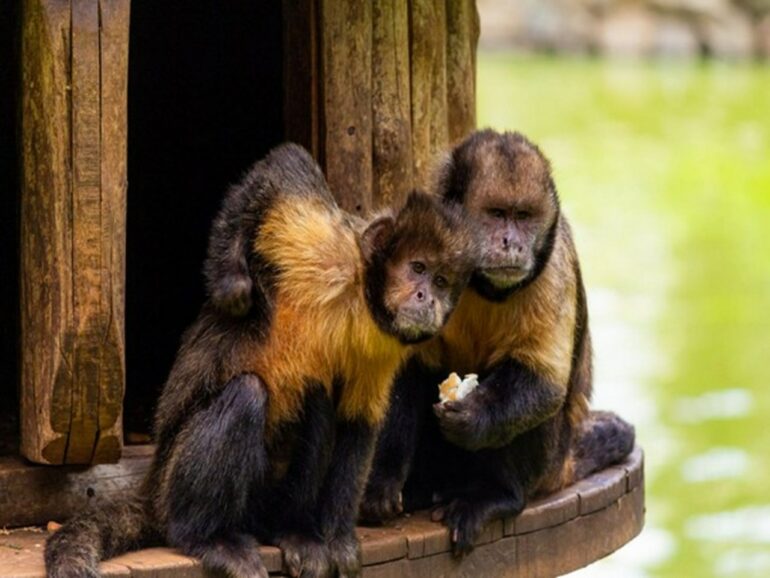 Capuchin monkeys (Sapajus spp.) are among only a few primates that use tools in day-to-day activities. In the Cerrado and Caatinga, they use stones as hammers and anvils to crack open cashew nuts, seed pods of Hymenaea courbaril (West Indian locust; jatobá in Brazil) and other hard foods.

In an article published in Scientific Reports, Brazilian researchers show that food hardness and tool size do not always correlate as closely as has been thought.

In their study, the researchers observed three populations of bearded capuchin monkeys (Sapajus libidinosus), measuring food hardness, tool size and weight, and local availability of stones. They concluded that culture, defined as information passed on from one generation to the next by social learning, can also influence behavior in this regard.

“In one of the populations we analyzed, even when they have stones that are suitable for use on a particular food resource, they may use disproportionately heavy tools, possibly evidencing a cultural trait of that group,” said Tiago Falótico, a researcher at the University of São Paulo’s School of Arts, Sciences and Humanities (EACH-USP).

The tools are pieces of quartzite and sandstone found in places referred to as processing sites. The animals frequent these sites solely to look for these stones for use as hammers and anvils. One stone is used to pound a nut or seed resting on another stone used as an anvil.

“In Serra das Confusões, they use smaller tools to open smaller and softer fruit but use large, heavy hammers to crack coconut shells, which are very hard. In Chapada dos Veadeiros, where there are stones of varying sizes to choose from, they use the heaviest ones even for fragile foods,” Falótico said.

Not by chance, it was in this latter park that the researchers recorded the heaviest stone lifted by capuchins. An adult male weighs 3.5 kg on average, and they filmed an individual lifting a hammer stone that was later found to weigh 4.65 kg. “They’re champion weightlifters,” he chuckled.

The findings were the result of a great deal of hard work. The researchers documented the kinds of food most frequently found in the processing sites, such as babassu (Attalea speciosa), West Indian locust, cashew, and wild cassava (Manihot spp). They also documented the stones available, as well as the sizes and weights of the tools they found, measured the hardness of each type of food using a special device, and observed and filmed tool usage in each study area.

“We expected to find a very close correlation between the type of food and the size and weight of the tool, but the population in Chapada dos Veadeiros mainly used the larger ones even though stones of all sizes are plentiful and they can choose a smaller size. They probably inherited this habit from their ancestors. It’s a cultural difference compared with the other populations,” Falótico said.

The cultural learning hypothesis is reinforced by the fact that studies in other areas, such as Serra de Itabaiana in Sergipe and Chapada Diamantina in Bahia (both states in the Northeast), involving Sapajus capuchins, stones and the same kinds of fruit and seed have not found processing sites or the use of stone tools for this purpose. In Serra das Confusões, the capuchins use tools to crack open several kinds of food except cashew nuts, which are nevertheless abundant.

“Their behavior isn’t due to the availability of resources but to cultural heritage,” Falótico said.

The researchers are now analyzing the genomes of all three populations to see if the cultural differences can be linked to genetic differences.

A paper by Falótico and a team of archaeologists from Germany, Spain and the United Kingdom, published in the Journal of Human Evolution, reports the results of field experiments conducted to test the potential for accidental flake production during nut cracking by capuchins using various types of rock as anvils.

Some capuchins ingest or anoint themselves with powder produced by pounding stones. They may also rub the powder on their teeth. Their reasons for doing so are unknown, but the researchers believe one aim may be to combat parasites. In the experiments, flakes were also produced by fragmentation of anvils comprising homogeneous material.

The monkeys did not use the flakes, which closely resembled the lithic tools found by archaeologists at digs around the world. The researchers believe the earliest hominins obtained flakes accidentally before their deliberate production for use as tools.

“Capuchins may also use flakes as tools in future if an innovative individual starts doing so, and others learn by observing. These primates can therefore serve as a model to help us understand human evolution,” Falótico said.

A previous study by the same group of researchers showed how lithic tools used by the capuchin population in Serra da Capivara displayed different patterns of wear marks depending on the activities involved.

Comparisons of the use-wear marks on tools used by monkeys and hominins could reveal how our earliest ancestors used lithic tools. It may therefore be possible to find out more about human evolution from the study of Brazilian capuchin monkeys.