Deciphering the impact of gene loss on biological evolution 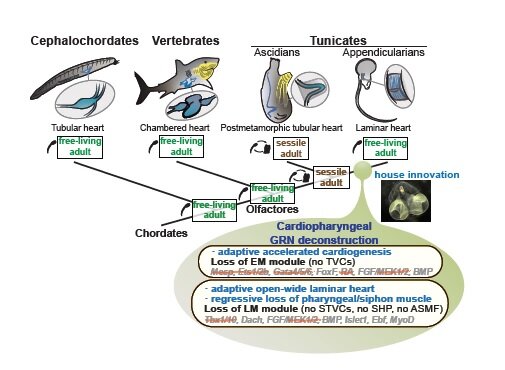 A paper in Nature proposes a new evolutionary scenario that helps to better understand the evolution of our phylum and to discover what the ancestor of tunicates—the sister group of vertebrates—were like. Specifically, it reveals that the massive gene losses which deconstructed the gene network in the heart of tunicates eased the transition to a free pelagic lifestyle in appendicularian tunicates from their ancestral sessile lifestyle.

For many years, the field of evolutionary biology had not paid much attention to gene losses, and most studies focused on how gene duplications could lead to new biological functions.

“In the era of genomics, however, we see that losing genes is not something exceptional in evolution, but rather a common phenomenon. First, it was thought that a gene was lost when it was no longer used (known as regressive evolution),” points out Cristian Cañestro, lecturer at the Section of Genetics of the UB, member of the Biodiversity Research Institute (IRBio) and principal researcher in the @EvoDevoGenomeUB research group.

“As shown in our study, we are identifying more and more gene losses that can be adaptive in nature,” he continues. “That is, losing certain genes can bring evolutionary advantages that can be related to the acquisition of biological innovations by organisms.”

The phylum of chordates is formed by the groups of vertebrates, tunicates (sister group of vertebrates) and cephalochordates. The basal position of cephalochordates and the fact that they are free-living organisms indicate that the ancestor of all chordates had a free-living style too. In the case of tunicates, however, there are sessile (ascidians) and free living (appendicularians) animals. Whether the common ancestor of tunicates was a peaceful filter feeder fixed to the seafloor or an active swimmer was a key debate to understanding what the predecessor from which vertebrates also originated was like.

This research group is a global pioneer in the study of the species Oikopleura dioica—an organism of the marine zooplankton from the appendicularian group—as an animal model to study the impact of gene loss as an evolutionary force. Unlike ascidians, Oikopleura dioica do not undergo a drastic metamorphosis to become a sessile animal, but retains their chordate body plan and a pelagic free-swimming lifestyle throughout their cycle. In addition, the free lifestyle of Oikopleura dioica is characterized by the construction of a filtering device that surrounds the animal, which is termed house (Oikos means ‘house’ in Greek). Through this house, it makes the water circulate thanks to the incessant movement of its tail to efficiently trap marine microalgae. Everything makes the Oikopleura dioica an attractive model for studying what the ancestor of tunicates was like and for inferring whether this ancestor was a free-living animal like the vertebrates’ ancestor.

The results of the article reveal the existence of massive losses of genes in the appendicularians that affected the cardiopharyngeal gene regulatory network millions of years ago. “In the study, we identified the loss of many genes that are essential for the development of the heart in the other organisms of our phylum,” says Alfonso Ferrández-Roldán (Genetics Section-UB-IRBIO), first author of the article, which includes the results of his Ph.D. research project.

“Our study shows that the heart of Oikopleura dioica is homologous to that of other chordates, and therefore derives from a heart that already existed in the common ancestor between humans and Oikopleura dioica,” notes Alfonso Fernández-Roldán. “However, it has been surprising to see that, despite having a homologous heart, many genes that are essential for humans and other chordates hearts have been lost in Oikopleura during a process of deconstruction that has affected the cardiopharyngeal gene network.”

“Deconstruction” in the evo-devo perspective

The article addresses the impact of gene loss from the perspective of evolutionary developmental biology (evo-devo), a discipline that, following the evolutionary ideas of Charles Darwin, aims to understand how the genetic changes of the mechanisms of embryonic development favor the generation of the biodiversity. “In our case, we focus on gene losses as driving force that generates changes,” notes Ricard Albalat, co-author of the study, lecturer of Genetics at the UB and member of IRBio.

Gene losses do not affect the gene network randomly. “Our study reveals that gene losses are not evenly distributed; they only affect certain gene groups that are simultaneously co-eliminated,” he explains. According to Albalat, the study also “reveals that massive gene loss occurred suddenly at the base of the appendicularian group and, as such, marked the differential evolution of the heart of all the species in this group compared to the rest of the tunicates.”

The patterns of co-elimination reveal a deconstruction process of the gene network that regulates heart development. “Deconstruction is a term that comes from the field of philosophy, which is also applied to areas such as architecture, literature and even gastronomy, with the chef Ferran Adrià as its most prominent reference,” notes Cristian Cañestro. “It does not involve destruction, but the dismantling of elements ─usually combined─ whose analysis helps us to understand the modular structure of a more complex organization,” Cañestro says.

The study of gene losses and the concept of deconstruction applied to evo-devo, and evolutionary biology in general, has made possible to identify processes of co-elimination and to recognize the evolution of certain modules within gene networks that are important for generating differences in embryonic development in different species and the creation of biodiversity.

“In our case, the deconstruction of two modules of the gene network correlates with the loss of multipotency of pro-cardiac stem cells, which in vertebrates and ascidians give rise to different parts of the heart, as well as to the pharyngeal muscles,” adds Cañestro. “Therefore, the study of gene loss and the application of the concept of deconstruction to the area of evolutionary and developmental biology ─ which is one of the most significant scientific contributions of our work—can promote research in this direction.”

“Taking into account that vertebrates, cephalochordates, and appendicularians are free living animals, it was postulated that the most plausible evolutionary scenario was that the tunicate ancestor was also free living,” explains Alfonso Ferrández-Roldán.

Now, the results of the paper contradict this evolutionary scenario. “In the study, we were able to correlate the loss of genes with the disappearance of typical characteristics related to the sessile lifestyle of ascidians. This has led us to infer that the common ancestor of all tunicates was a sessile organism, and not a free-living one, as previously thought,” he continues.

The article highlights that the massive gene losses could be linked to three evolutionary innovations that facilitated the transition from an ascidian-like ancestor—mobile larvae and sessile adults—to the completely free-living style of appendicularians.

A first adaptation related to gene losses would be the acceleration in the process of heart development (cardiogenesis). This acceleration allows appendicularians to have this organ fully functional at the beginning of their free lifestyle, when they inflate the first house few hours after fertilization. In ascidians, on the other hand, cardiogenesis is a slower process, as the heart does not finish its development and does not begin beating until days after a radical metamorphosis: the one that transforms the mobile larva into a sessile organism attached to a surface at the bottom of the sea.

Other gene losses that would contribute to a second adaptation would be linked to the redesign of a new heart structure: the loss of the second heart field. This evolutionary change could be related to the change from a heart with a cylindrical structure (ascidians) to one with a laminar structure (appendicularians). The evolution to a laminar heart in appendicularians could be adaptive and improve the circulation of haemolymph, also driven by the tail movement characteristic of the free-living lifestyle of these pelagic organisms.

The disappearance of the pharyngeal musculature in the trunk of Oikopleura dioica would be a third evolutionary innovation towards an active swimming life. The function that this muscle has in sessile ascidians—it regulates the siphon through which water enters─ would be totally unnecessary in appendicularians, and therefore would have entailed additional gene losses (regressive evolution).

Changing the evolutionary landscape thanks to research at a public university

This basic research study featured on the cover of Nature outlines a new evolutionary scenario that solves enigmas about the origins and evolution of appendicularians, their phylogenetic relationship with other tunicates and the common ancestor of vertebrates. “Our work reveals what the ancestor of tunicates was like and opens up new questions such as how sessile life evolved in ancestral tunicates from a free-living ancestor possibly similar to what we observe in vertebrates,” says Cristian Cañestro.

In this context, the Evo-Devo Research Group is a leader in an area that has become an international reference in this field of basic research about the evolution of our phylum, examining what the ancestors that preceded the human species millions of years ago were like.

“We need to understand the evolutionary history in order to understand ourselves,” says Jordi Garcia Fernàndez, full university professor of Genetics at the UB, principal researcher of the Evo-Devo Research Group and member Institute of Biomedicine of the UB (IBUB).

“This basic research is the basis for promoting the applicability of knowledge. For example, new animal models to study heart diseases, future therapeutic targets in biomedicine, patents, etc. This is why it is worth highlighting the effort being made by public universities in this direction,” adds Jordi Garcia-Fernàndez, Vice-Rector for Research at the UB.