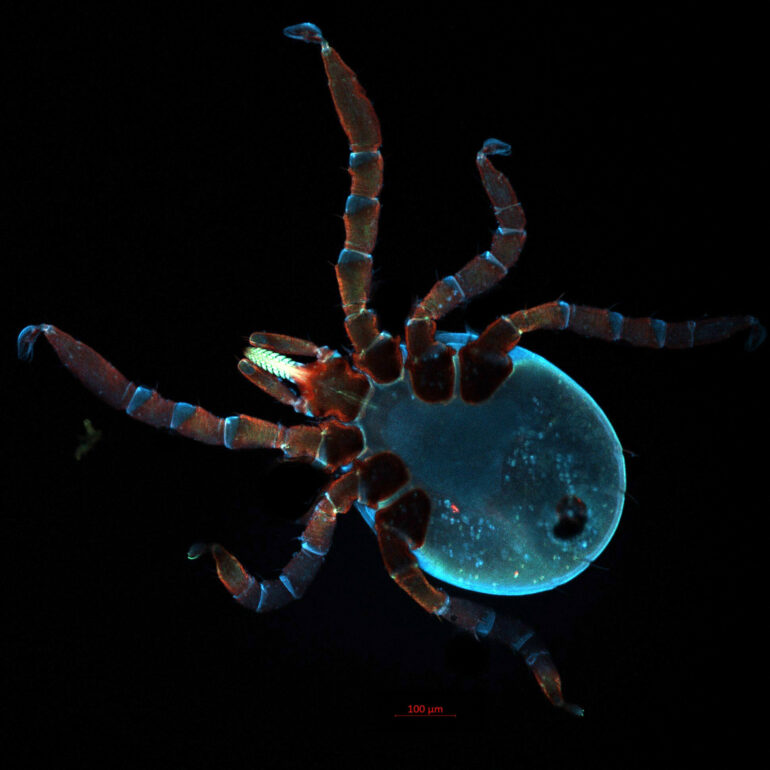 Research led by a University of Maryland team has identified the first inter-species signaling pathway between an arthropod parasite and host, where molecules in the blood of a host animal triggers the immunity and development of a parasite. The study showed that when ticks feed on the blood of mice infected with the bacteria Borrelia burgdorferi, which causes Lyme disease, a protein from the mouse immune system binds to receptors on tick cell surfaces and signals organs to develop more rapidly, producing an immune response long before the bacteria itself can begin to infect the tick.

The study, which was published on January 13, 2023, in the journal Science, identifies a potential target for anti-tick vaccines or therapeutics to prevent the spread of infections like Lyme disease. The findings also provide important new insights into the evolution of biomolecular interdependencies between species, and highlight, for the first time, both the integration of immunity and animal development and the adaptability of an ancient cell signaling system or pathway that all plant and animal cells use for sensing and responding to their environment.

“This adaptive flexibility of a conserved cell signaling pathway was surprising,” said Utpal Pal, senior author of the study and a professor in the Virginia-Maryland College of Veterinary Medicine at College Park. “It is remarkable that this pathway that is present in everything from sponges to humans is so flexible it can adapt to accept a ligand [a binding molecule] from another distant species. This tool that everybody has is being used in a way that we didn’t imagine.”

The finding suggests that other cell signaling pathways may have been adapted for novel uses in other organisms and points to a new area in immunology and molecular biology ripe for future exploration.

Pal and his colleagues made their discovery while investigating tick immunity, which is a poorly understood area of tick biology. In their initial study, seeking to understand how tick immune systems recognize the Borrelia bacteria, the researchers fed ticks a blood meal from either a Borrelia-infected mouse or an uninfected mouse. Comparing the two groups, they found that the infected blood meal activated a protein in ticks that normally produces energy inside cells. The protein is associated with a simple signaling pathway called JAK/STAT, which is present in all multicellular organisms.

As in all cellular signaling pathways, a specific molecule senses something in the environment and then binds to a receptor on the outside of a cell wall. This sets off a cascade of reactions inside the cell that turns a specific gene on or off and produces a response to whatever outside stimuli was sensed.

Assuming that JAK/STAT was triggered by the Borrelia in the infected mouse blood, the researchers isolated the bacteria and injected it directly into ticks to see what molecules were binding with the JAK/STAT receptor. Surprisingly, the bacteria did not activate JAK/STAT. To find out what did, the researchers removed the Borrelia bacteria from the blood of infected mice and fed the “clean” blood to ticks. The JAK/STAT pathway kicked into action.

The researchers discovered that a protein in tick digestive systems was serving as the JAK/STAT receptor, and that it had evolved to bind with the cytokine protein interferon, which is produced by the immune systems of mammals infected with a bacteria like Borrelia.

The researchers also found that the JAK/STAT receptor and pathway are important for normal tick development, even if the pathway is not activated by an infected blood meal. When Pal and his colleagues knocked down the expressed gene that produces the receptor for JAK/STAT, the ticks grew deformed legs, mouthparts, and digestive systems, and were unable to feed and complete the developmental cycle to grow further.

These results suggest that in ticks, the JAK/STAT signaling pathway, and the protein receptor have evolved to integrate immunity with development. Bacteria will compete with ticks for nutrients in the blood of an infected host, so when a tick gets the signal that a blood meal is infected, growing rapidly is a way to use up those nutrients before the bacteria gets them. Laboratory experiments concur that ticks fed on Borrelia-infected mouse blood developed much quicker than those that fed on uninfected mouse blood.

“Understanding that this pathway integrates immunity and development has important implications for potential strategies to prevent tick-borne disease transmission,” Pal said. “Because if you delete the pathway, ticks with malformed mouthparts cannot feed or transmit disease. But what is also really exciting to me is that we see this sort of early-warning system, where the tick’s immune system indirectly detects a pathogen using an immune response from its host rather than the pathogen itself, accelerating its own development.”

The paper, “Dome1–JAK–STAT Signaling Between Parasite and Host Integrates Vector Immunity and Development,” was published in the journal Science on January 13, 2023.