Disease predictions can be improved by factoring in mosquito predators 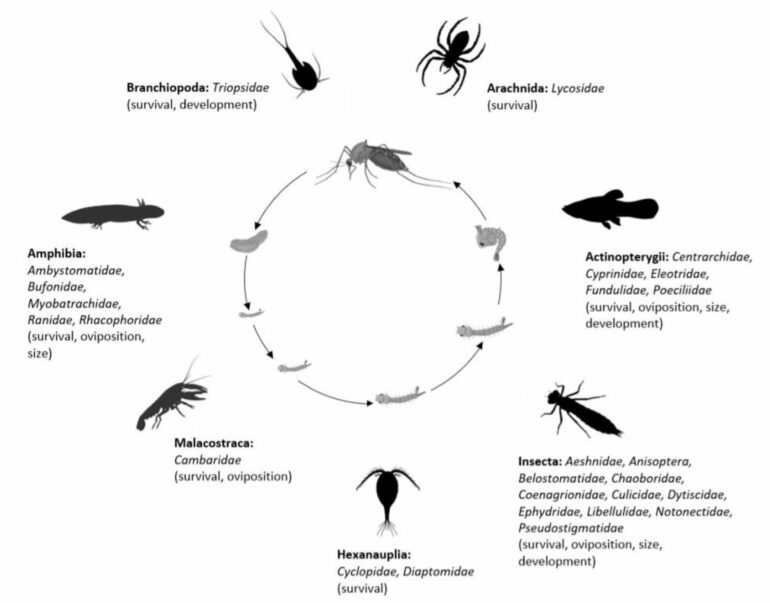 The way mosquitoes react to predators should be included in disease models, say researchers behind a new study.

They say the information can improve predictions of when and where there might be high numbers of human infections of mosquito-borne diseases. The research is led by Imperial College London and Pennsylvania State University scientists and published today in eLife.

The study shows how the presence of different predators can cause significant changes for mosquitoes’ bodies and behaviors, which alter the likelihood of them passing on diseases to humans, including malaria, West Nile virus and dengue.

For example, exposure to predators can cause a reduction in the average mosquito body size, leading to shorter lifespans and fewer offspring per mosquito, ultimately reducing the spread of disease.

Co-first author Dr. Marie Russell, from the Department of Life Sciences at Imperial, said: “People have been wondering for more than a century what eats mosquitoes, and what this could mean for the diseases that they carry. There are so many papers on specific predation interactions, and the large number of studies that have already been published is what allowed us to synthesize such a comprehensive meta-analysis.”

Mosquitoes of different species are eaten by a wide range of predators, such as fish, insect larvae, spiders, and amphibians.

This second category of effects is not routinely included in disease dynamics models, as the effects can be complex. Now, by assessing observations from the scientific literature dating back to 1970, the multi-disciplinary team has been able to estimate the sizes of these non-consumptive effects.

They divided the observations into seven subsets based on the mosquito trait measured in response to predation, such as body size and egg-laying behavior.

The team also looked at the specific example of West Nile virus, cases of which are known to increase during drought conditions, but with unclear explanations as to why. They suggest that during drier periods, places where mosquitoes usually lay their eggs—permanent, often rural water bodies like ponds—become too crowded with predators.

The heightened threat of predation might cause mosquitoes to seek out smaller, more temporary egg-laying sites that are often found in urban environments, such as puddles in tires or watering cans. This leads to more encounters with humans, upping the chance of infection.

As well as improving predictive power, allowing local authorities to be more prepared for disease outbreaks, the results of the study could also help public health practitioners decide which predators to use as effective biocontrol agents to reduce local mosquito-borne disease spread.

The researchers are now hoping to repeat their analysis for other insects that spread diseases, such as aphids, which are damaging agricultural pests, and kissing bugs, which carry Chagas disease.


Citation:
Disease predictions can be improved by factoring in mosquito predators (2022, January 20)