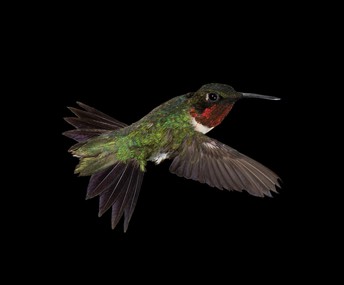 Ruby-throated hummingbirds use the same energy-conserving strategy to survive overnight fasts and build the fat stores they need to fuel long migrations, shows a study published in eLife.

The findings help prove a long-held suspicion among scientists who study hummingbirds. They also provide new insights on the rules the birds use to determine whether to conserve energy or stockpile fat.

Tiny ruby-throated hummingbirds constantly eat sugary nectar to fuel the rapid wing movements that allow them to hover. To conserve energy during their overnight fasts, the birds can shift into an energy-saving mode called torpor by lowering their body temperature and slowing their metabolism up to 95%.

“We wanted to know if hummingbirds use this same energy-saving mechanism to more quickly build the fat stores they’ll use to power their 5,000-kilometer migrations between their North American breeding grounds and Central American winter homes,” says first author Erich Eberts, a Ph.D. student at the Welch Lab, University of Toronto Scarborough, Ontario, Canada.

To study how and when the hummingbirds deploy this energy-saving strategy, Eberts and the team measured daily changes in the body, fat, and lean masses of 16 ruby-throated hummingbirds during three periods: The breeding season, late summer when the birds prepare to migrate, and during the birds’ typical migration period. They also measured the birds’ oxygen consumption using a technique called respirometry to determine when they shifted into torpor.

During the breeding season, the hummingbirds maintained lean body masses and only entered torpor when their fat stores fell below 5% of their body mass. This “energy-emergency strategy” was usually deployed on nights when they went to sleep with lower energy reserves.

But in the late summer, when the birds typically increase their body mass by 20% to sustain themselves over the long migration, they stop using the 5% threshold for entering torpor. Instead, they enter torpor more frequently and at higher levels of fat. This allows them to conserve energy and build up fat even as nights get progressively longer. “We’ve shown that hummingbirds abandon the energy-emergency strategy in the late summer and start using torpor to accumulate the fat stores they need for migration,” Eberts explains.

The authors add that learning more about this energy-saving strategy may be important for the conservation of ruby-throated hummingbirds and other migrating bird species that face increasing stress from climate change and habitat loss.

“Our findings that hummingbirds can use torpor to cope with different energetic challenges throughout the annual cycle are important for understanding differences in how these and other migratory animals that don’t use torpor might respond to future environmental changes in food availability and temperature,” concludes Kenneth Welch Jr., Associate Professor and Acting Chair of the Department of Biological Sciences at the University of Toronto Scarborough, and co-author of the study alongside Christopher Guglielmo, Professor at the University of Western Ontario, Canada.